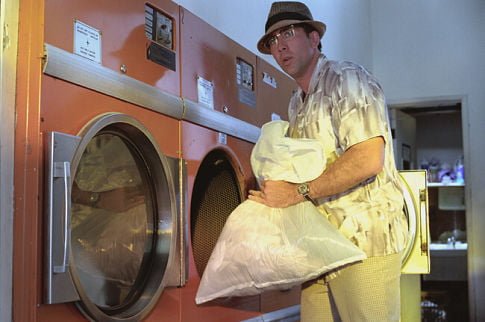 Roy (Nicolas Cage) is a conman with a list of neuroses that would choke a horse. He is a clean freak with a fear of the outdoors but, ticks and all, still makes a lucrative living pulling off swindles with his partner and protégé Frank (Sam Rockwell). When Roy learns, with the help of a psychiatrist Frank recommended, that he has a daughter from a long ago marriage, he arranges to meet the girl, Angela (Alison Lohman), Like it or not, the con artist’s life is about to change in Ridley Scott’s “Matchstick Men.”

Roy (Nicolas Cage) is a con man in crisis. The agoraphobic, dirt-obsessed, tic-laden Roy has lost the illegal pills that enable him to function so he must see a psychiatrist, Dr. Klein (Bruce Altman, "L.I.E."), to obtain new ones. Those sessions result in a meeting with the fourteen year old daughter, Angela (Alison Lohman, "White Oleander"), Roy didn't know he had and she appears on his doorstep just as the sting his partner Frank (Sam Rockwell, "Confessions of a Dangerous Mind") has been pressuring him into has been put into play in director Ridley Scott's "Matchstick Men." Cage is once again on a roll, taking character rather than action roles, and it is a pleasure to watch him work. His twitching, stuttering performance may have roots in "Adaptation's" Charlie, but Roy is a unique creation, a new father of an adolescent girl. He's the reason to see "Matchstick Men," a good film kept from greatness by a script (adapted from Eric Garcia's book by Nicholas Griffin and Ted Griffin) that tips its hand too early. Roy closets himself in his postmodern ranch where he allows no shoes to touch carpet. Living off of Chicken of the Sea and Tarrytons, he watches light reflecting off his outdoor pool and occasionally ventures outdoors to join Frank at their office where they perpetrate sales contest fraud. When Angela moves into his home, Roy almost learns to accept teenage squalor, but his protective instinct comes on strong, pushing Angela away. In order to make amends, Roy promises to teach her a con and she takes to it like a fish to water. When Frank calls to tell Roy that their mark, Frechette (Bruce McGill, "The Legend of Bagger Vance"), is leaving town earlier than expected, Roy's forced to pull Angela into the job and the elaborate scheme unravels, endangering both of them. Con films demand razor sharp scripts, and, unfortunately, while characters are nicely defined, the plot is compromised from its inception. The complex scheme that has been cooked up by Frank is set in motion by an accident of Roy's - chance shouldn't have been part of this equation. Still the details are rich, from the ceramic bulldog Roy stashes his cash and gun in to Angela's blackmail tactics ('I've done stuff with guys that would make you throw up') and the tentative relationship Roy has with an observant cashier at the supermarket. Technically, the film is first rate. Cinematographer John Mathieson (Scott's "Hannibal" and "Gladiator") shoots Roy's house like a gloomy tomb backlit from the outdoor pool light while all exteriors are bright and sunny. Cage is wonderful, with a believable character arc that shows him a changed man (in an amusingly ironic profession) in the film's coda. Lohman seems more confident in her second starring outing as the emotionally needy but cheeky teen. Altman is droll in the crux position of the life-changing shrink and McGill neatly segues from innocent dupe to threatening opponent. Only Rockwell disappoints in a sketchy turn. "Matchstick Men" is an OK sting flick, but a terrific character study of a man who accepts losing everything in exchange for piece of mind.

I had been anticipating helmer Scott’s foray into comedy mainly to see Nicolas Cage play a character instead of an action hero. There was a stretch there where the Academy Award winning best actor (for “Leaving Las Vegas”) was little more than an action figure in films like “The Rock” or “Face/Off” and it looked like a case of lost potential. He came back, fortunately, with more acting oriented performances as “Family Man.” While “Matchstick Men” is a good, not a great film, it does have, to its credit, a quirky, likable performance by Cage. Roy is a conman, first, but being a neurotic is a close second. He has things under control, sort of, with medication obtained in a not quite legal manner until he accidentally dumps it all down the drain. He and Frank go out on a scam and, while sitting in the home of their latest marks, Roy, without his pills, has an attack, violent eye ticks and all. Afterward, Frank suggests that the stricken Roy go see a shrink and get more drugs. Dr. Klein (Bruce Altman) is reluctant to give an outright prescription to his stricken patient but does provide him with a sample pack of drugs to tide him over until next visit. Frank eventually opens up to the doctor and tells him of his longtime guilt about losing his wife almost 15 years before after hitting her while drunk. She was pregnant at the time and Roy wants to know if there was a child – but he is too afraid to call his ex. He gets the shrink to make the call for him and soon finds out that he is the father of Angela. He arranges a meeting through Dr. Klein and the pair begins to get acquainted. When the inquisitive 14-year old asks what her dad does, Roy tells her that he deals in antiques but, after she spends a little time in his home, finding a stash of money and a gun hidden inside a bulldog statue, she knows something else is up. Roy eventually tells her the truth. Angela’s reaction is to want to be a part of con artist’s life. Reluctantly, Roy agrees to show her the ropes and walks her through a small-time lottery ticket scam on an unsuspecting woman. They bilk her of $300 dollars and Angela is ecstatic – until Roy tells her to give the money back, mixing their high crime with parental guidance. At about this time, Frank proposes another scheme to score some big money from another dupe, Scotty Frechette (Bruce McGill). They sucker their new mark in with a small-scale money-laundering scheme with a plan to make a big time hit for 80 grand or more. Angela begs to take part in the scam and Roy, reluctantly but out of necessity, agrees. Although there are some bumpy moments in the beginning of the sting, things seem to go off OK. But, as they prepare to leave, Roy and Angela are confronted by an angry and violent Scotty who, somehow, found them out. Things go from new-father idyllic to con game gone bad, in short order. From here on in you’ll have to see the movie if you want to know what happens next. As you would expect from Ridley Scott, “Matchstick Men” is a well-acted, well-crafted work that, as I said, showcases the talents of Nicolas Cage. The supporting cast, though small, does a good, solid job in helping things along. Alison Lohman is far more comfortable as Roy’s foil than she was as the centerpiece of “White Oleander.” The young actress has a good deal of chemistry with Cage and there is an immediately comfortable feel between them. Sam Rockwell does yeoman’s work as Roy’s cocky partner who learns from his mentor – a bit too well. Bruce McGill gives his bellicose, unlikable sucker character a villainous edge that works. Bruce Altman is fine as the shrink with a secret. A very slow developing love interest between Roy and a supermarket clerk is brought to sweet fruition in the end. The story, by Nicholas Griffin and Ted Griffin, from the book by Eric Garcia, is more akin to “The Grifters” than to “The Sting” in scope but without a great deal told about the various scams that conmen use against their unsuspecting dupes. This is not an examination of the mind of a con artist but a character study, by Cage, of a man who is at a point in his life where he should give up his misdeeds and retire from the game – but doesn’t. Unfortunately, for me, I saw what was coming fairly early on and it was just a matter of movie run time before I was proved correct. This transparency in the story took things down a notch for me with “Matchstick Men.” Of course, things look good with John Mathieson Hannibal’s camera used to convey Roy’s neurotic attacks, such as when one of his marks opens the porch door and Roy sees all the motes and other horrible things that live just outside the safety of indoors. I wish “Matchstick Men” kept me in the dark longer than it does leading to the climax. It is a real pleasure, though, to see Cage in thesping form again.