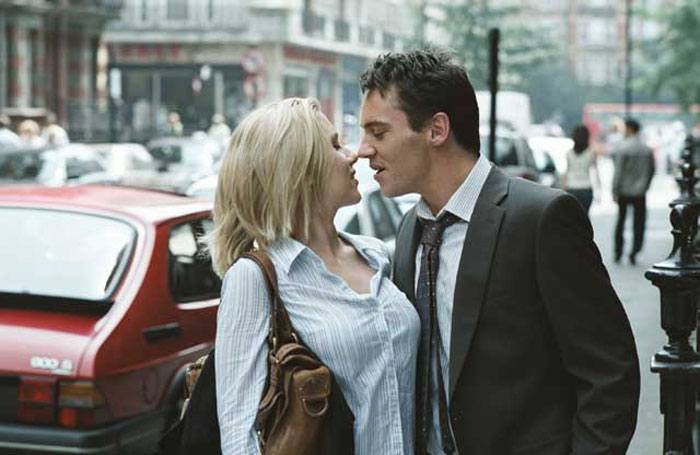 Former professional tennis player Chris Wilton's (Jonathan Rhys Meyers, "Bend It Like Beckham," "Alexander") acceptance of a job as a tennis pro at a swanky London club enables the working class Irish bloke to mix with the British upper crust. His belief in luck begins to be proven when his first student, Tom Hewett (Matthew Goode, "Chasing Liberty"), has a shared love of opera. Tom invites Chris into his family circle and sister Chloe (Emily Mortimer, "Dear Frankie") sets her sights on the handsome young man. Chris's attention is instantly attracted by the sight of Tom's sexy American fiancee Nola Rice (Scarlett Johansson, "The Island"), but he settles for Chloe's comfortable wealth after Nola spurns his advances. Then Tom unexpectedly drops Nola and Chris decides to have his cake and eat it too. He's going for the "Match Point."

Writer/director Woody Allen ("Melinda and Melinda") tints his own "Crimes and Misdemeanors" with George Stevens's "A Place in the Sun," leaves his beloved New York completely behind for the first time ever and delivers his best film in years. If Woody has paid homage to Bergman and Fellini in the past, this is his homage to Hitchcock. "Match Point" isn't quite up to Woody's very best, but it features a craftily written killer ending, the players are beautifully cast and Emily Mortimer, in particular, is terrific in a difficult role. Woody tips us off to his seriousness of purpose with his musical selections, old scratchy recordings of operas telling of crossed loves, class, betrayal and death. His theme of luck, which Chris believes is far more important than morality, is represented by a tennis ball which hits the net, luck determining which side it will fall upon. His protagonists, Chris and Nola, are both not only working class, but not English. Instead it is their sex appeal which has ensconced them in the bosom of British old world wealth and these shared traits also bind them. The two trophies have the hots for each other. We hear little about Chris's background, but everything seems to go right for him. Alec (Brian Cox, "Red Eye," "The Ringer") and Eleanor Hewett (Penelope Wilton, "Calendar Girls," "Pride & Prejudice") want their baby girl Chloe to be happy and so Alec brings Chris into his firm where he appears to flourish. 'I don't buy into Eleanor and she knows it, but you are being groomed,' Nola informs Chris over a drink after the two bump into one another. Having failed another audition, a somewhat sloshed Nola also tells Chris that her mother could never hold down a job because she drank too much. As Chris is mobilized upwards by the family, Nola is looked down upon by Eleanor (who also drinks too much and who does not recognize her own daughter's under achievement) for her failure to get work in her chosen career. She bluntly tells her so during a country weekend and Nola makes a dramatic departure only to be surreptitiously followed by Chris. After a rain-soaked tumble, Nola refuses to continue the affair, so Chris marries Chloe. Then, in a clever visual mirror image, Tom marries, but his bride isn't Nola! Once again Chris runs into Nola and he pursues her aggressively, but when he is forced to make a choice between her or his cushy life he chooses status over sex, then preserves that choice by carrying out a dastardly deed. Allen puts his principal and the audience through the wringer in his final act. We see a horrible crime committed in a way that screams for justice, both morally and investigatively, and sweat as Inspector Dowd (Ewen Bremner, "Trainspotting," "Around the World in 80 Days") and Detective Banner (James Nesbitt, "Bloody Sunday," "Millions") dance around the truth. Allen lobs that opening ball towards the net again, but even as we see it fall, he keeps his cards aloft and pulls about a beautiful sleight of hand. Jonathan Rhys Meyers plays his type, the opportunistic bounder, well, although he provides little beneath the surface other than lust and an ability to deceive. Goode is also a type, the veddy, veddy aristocratic Englishman, a good chap on an even keel, a role Rupert Everett may have played in his younger days. His character is such a plot device, that when he marries someone else, we never even learn her name. Veteran Cox gives a slyer performance, the benevolent old man, seemingly clueless to ill intent but nonetheless a lion of his industry, his presence always felt even as he hovers in the background. It is the women who provide the piece more depth beginning with Emily Mortimer's mousy Chloe who wields passive aggression like a master player. Mortimer makes her appear shy as she pushes forth her agenda, asking Chris out under the aegis of friendly good manners. She covers for his 'boring' choice of chicken at a restaurant as humble modesty, steering him towards the more sophisticated choice of caviar blinis. Mortimer just nails the privileged daughter who expects nothing and everything, who pushes her agenda even as she appears to be surrendering. Johansson plies her husky seductiveness while revealing a messed up inner core, yet Johansson cannot rise above a crucial development which should gain Nola sympathy but instead turns her into a nag. As her luckier, if unacknowledged, counterpart, Penelope Wilton shows what Nola may have become instead, a somewhat ridiculous but indulged pet. Bremner and Nesbitt are saddled with lots of exposition and also appear overly naive, but they are both in service to Allen's nod to Hitchcock cops and achieve the assignment with wit. Allen may need to spend more time in London (his next film, "Scoop," is also set there and also stars Johansson) before he can begin to capture its flavor. In "Match Point" he uses his Big Apple template for the city of Big Ben, defining it via museums, trendy eateries luxury shops. He and production designer Jim Clay ("Stage Beauty") do better psychologically, moving Chris from a subterranean studio to environments encased in glass. "Match Point" has such a thoroughly satisfying jolt of a conclusion that it makes the film seem more original than it indeed is, but while Allen's twisty little dark tale may echo one of his earlier films, it feels like an auteur's reinvention. If I hadn't known whose work it was, I'd have been hard pressed to identify its author.

It's scary to think so much is out of one's control. There are moments in a match when the ball hits the top of the net and for a split second it can either go forward or fall back. With a little luck, it goes forward and you win…or maybe it doesn’t, and you lose.” These are the words of Chris Wilton (Jonathan Rhys-Myers), a former pro tennis player whose luck had failed him on the courts. But, when he meets Tom Hewett (Matthew Goode), the scion of a wealthy British businessman, that luck changes – or does it? – in Woody Allen’s “Match Point.” With the exception of a brief sojourn to Paris for an along-the-Seine sequence with Goldie Hawn in “Everyone Says I Love You,” writer-director Woody Allen’s works have always been set in America, usually in his beloved New York City. Allen breaks his always-in-America filmmaking dedication this time around, journeying across the Pond to London with his story about luck, lust, love and more. Chris is a likable young guy who takes a job teaching tennis at a swanky country club. He is hired to give private lessons to silver spoon-born Tom and the two become fast friends. Chris soon falls for Tom’s pretty sister, Chloe (Emily Mortimer), and they soon marry. The young tennis pro’s hard life and bad luck appears to have finally changed for the better. Except for one thing: Nola (Scarlett Johansson), Tom’s sexy and sensuous American-born fiancée. The attraction between Chris and Nola is intense but she warns him to not blow his now-pampered lifestyle by making a pass at her. The warning falls upon deaf ears, especially after Tom, with the prodding of his mother (who thinks Nola is just American trash and unworthy of her son), breaks his engagement. Chris and Nola begin a torrid but secret love affair that parallels his rise up the Hewett company corporate ladder. They carry on their clandestine tête-à-tête with Chris promising to leave his wife (and, of course, his new life) for the beautiful Yank. A wrench is thrown into the works when Nola announces that she is pregnant and the pressure she puts on Chris to get a divorce is ramped up to the extreme. Unless he does what she demands, Nola is fully prepared to tell all. Chris must make a fateful decision that could fix everything – or ruin it. Match Point” is most unlike a Woody Allen film that the prolific auteur has ever made. While you can see elements of his many other works – he supplants New York with London but the street scenes are an overlay of his beloved Manhattan – you never get the feeling that you are watching a “Woody Allen film.” In the past, Allen has paid homage to such film greats as Ingmar Bergman (with “Interiors”) and Federico Fellini (with “Stardust Memories”). This time around he does the same, but in a far more subtle way, for Alfred Hitchcock. Allen’s story involves deception, violence and lie upon lie as his main character, Chris, grows to love his new lifestyle but also wants the illicit fruit of Nola. What starts out as a poor boy’s rise to the top takes on very sinister qualities, indeed, giving Jonathan Rhys-Myers a complex, three-dimensional character. Rhys-Myers, who made an impression as the handsome soccer coach in “Bend It Like Beckham,” does a solid job developing Chris from a nice, though plagued by bad luck, guy to a hedonist who uses Nola for his own pleasure, her feelings and needs be damned. Scarlett Johansson is strikingly beautiful as Nola but is treated, by Allen, as an object – albeit, a gorgeous one - rather than subject. Emily Mortimer fares better as the loving, loyal Chloe, who is both friend and wife to Chris, making you empathize with her as you watch her philandering husband. Matthew Goode is likable but not very fleshed out as Tom. Brian Cox gives a fine performance as Hewett patriarch, Alec. Penelope Wilton, as Eleanor Hewett, is both protective of her children and a snob when it comes to Nola, giving dimension to her small maternal role. Allen pays attention to the tiny but affective perfs by James Nesbitt and Ewen Bremner as the cops investigating nefarious deeds and it is done with true Hitchcockian way. Techs are fine all around. Lenser Remi Adefarasin does a masterful job capturing Allen’s typical long shots of character interaction, usually indoors, while also taking every opportunity to dote, in extreme close-up, on Johansson’s full-lipped beauty. Production designer Jim Clay also does well in bringing us into the pampered stratosphere of the wealthy of London. You’re not going to get laughs in “Match Point,” of course, but you do get to see Woody come through with a evenly structured, interesting and, in the end, satisfying dramatic work that we haven’t seen from the filmmaker in a long time.