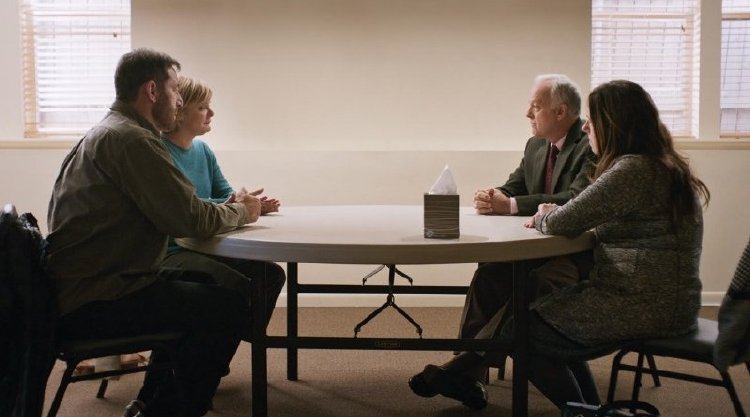 Judy (Breeda Wool, TV's 'Mr. Mercedes'), an Episcopal Church employee, arrives to set up a room for a meeting, a task that is clearly making her nervous.  She’s joined by Kendra (Michelle N. Carter), an advance woman for one of the parties who begins making demands and observations about the tiniest details.  Then we witness what appears to be a working class couple, Gail (Martha Plimpton) and Jay (Jason Isaacs), in a car.  ‘I don’t think I can do it’ she tells him.  Then ‘I don’t think I can say it.’  Pause.  ‘If I don’t, would you?’  We will learn just what Gail is wrestling with when she and Jay are joined by Linda (Ann Dowd) and Richard (Reed Birney, "The Hunt") in “Mass.”

A lot of how you may feel about writer/director Fran Kranz’s filmmaking debut will depend on your tolerance for overt manipulation.  I found Kranz’s decision to turn the first act of his real-time drama into a big tease off-putting, a screenwriting device prizing suspense over his very serious and emotional subject matter.  It not only cheapens it, but it is illogical the characters we see in those opening minutes wouldn’t discuss something so newsworthy.  The actor stepping behind the camera for the first time did a lot of research into his subject, and yet his four characters are types devised like the shuttles of a loom each holding a different colored thread to weave his design.  The staginess of his direction is apparent from the get go, Judy acting as his production manager, Kendra his art directing talent rep.  Thankfully, the casting here is unexpected and exemplary, an ensemble well worth considering at year’s end.  Plimpton, Isaacs, Birney and Dowd are “Mass’s” reason to congregate.

Once these four have been introduced in a back room set with a table, four chairs and too many refreshments, we can sense a power dynamic, Linda offering Gail a gift of flowers, Gail accepting them, then seeming to reject them when she learns Linda put them together herself.   Richard and Linda seem very different from Jay and Gail, he a rather reserved businessman who has flown in for this discussion and will be flying out later that day, Linda a more New Agey, earth mother type.  The small talk, asking about each other’s children, is awkward.  Jay assumes the role of moderator, attempting to keep everyone engaged.  Each couple has brought things to share and Gail begins to pass over family photographs, labeling one ‘the last Christmas.’  Linda breaks down when she sees it.  Gail gets up and slams down a tissue box beside her.

The subject Kranz keeps under wraps for so long is a horrific, Columbine-like school shooting six years in the rearview mirror and even once that is apparent it will still be some time before Gail bluntly states that Linda and Richard’s son killed hers.  All four are dealing with grief, but the couples’ experiences have been vastly different.  Gail has been in therapy and she and Jay have been instructed not to interrogate the other couple, but it is clear Gail is assigning blame, jumping at any intimation the other parents ignored warning signs.  Linda is coming from a place of healthy confrontation, looking to heal.  The men will be surprised to admit things they had not until this day, but it is the two women who will power through the roughest goings.

The surprise in the casting is not any individual, although Isaacs makes the biggest leap from his usual villainous roles, but in the grouping of these four.  Plimpton traverses the thorniest emotional road and has never been better, slight perceptional shifts cutting chinks in her long worn grief armor.  Dowd comes in as a supplicant, the hesitation in her speech at first seeming affected, but she brings her performance home in the last act with a devastating admission.  Isaacs is Everyman, the most relatable character, his hurt unleashed when he recounts the details of his son’s death.  Birney is guarded, a far more extreme contrast to his wife of the two couples, yet he makes Richard’s almost robotic response to Jay revealing, and when he allows that guard to drop, even slightly, it has power.

Kranz has done a good job giving equal time to the parents of the boy ‘who destroyed all our lives,’ Susan Klebold’s memoir one of his research touchstones.  In fact, we come to sympathize with Richard and Linda so well, it may be startling to witness Gail’s forgiveness of them.  But that opening evasion where the necessity of moving the Church’s choir practice was discussed comes back to tie things up with a bit of heavy handed symbolism.  “Mass” features a great cast doing tremendous work shining a light onto all the intricate aspects of a tragedy’s aftermath, but Kranz’s behind-the-scenes rigging is visible on the main stage.

The administrator (Breeda Wool) of St. Thomas Church fusses about in preparation for four visitors. They all arrive and are shown to a private room where we will spend the next hours with the two couples as they face the demons that have ripped them, each, apart in “Mass.”
I watched tyro helmer Fran Kranz maneuver his tiny, capable cast in a story of untold personal horror as the reason for the gathering and it is slowly and carefully laid out. The “what happened” to bring these folks together is not made obvious but the mind of the viewer (me) forms its own idea – and I was right.

This slow burn of what happened is effectively handled in Kranz’s original screenplay as Gail (Martha Plimpton) and Jay (Jason Isaacs), who lost their son to violence, meet the parents of the boy responsible for it, Linda (Ann Dowd) and Richard (Reed Birney).

What happens for the rest of the story is the two couples, both sides baring their souls, finally having the chance to get answers to their inexplicable questions. It is a tough slog for all four players as they must relive the pain of the past and try to move on. It is about memories, both good and bad, and preserving those that mean the most. The tiny cast both is effective and believable.

I felt not as a distant observer of the couples’ pain but as a fifth party, though silent, allowed to watch and feel the emotions that are laid bare. As the story progresses, it moves from Linda and Richard trying to help the other couple even as they cope and explain their own, raw pain to Gail and Jay. It gets even more emotionally powerful as the latter struggle with their own unbearable pain.

“Mass” is not an easy film to watch but it deals with the issue of school shooting with care and understanding. If you look at the number of school shootings that take place in the US, the film makes you realize that there are a whole lot of Gails, Jays, Lindas and Richards out there and it should not be.