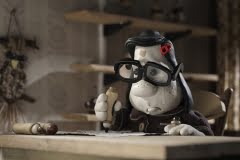 On the outskirts of Melbourne, young Mary Dinkle (voice of Bethany Whitmore) lives in 1972's 'Tidytown,' except that now it's 1976 and the place is decrepit. Mary has a poo-colored birthmark, eyes like puddles and wears a mood ring that is always gray. Her father works in a factory attaching strings to teabags and her mother is an alcoholic shoplifter who told Mary she was an 'accident.' Looking for a friend, Mary turn to the phone book and randomly picks a hoped for pen pal and over the years, the most unlikely and supportive friendship develops between "Mary and Max."

Writer/production designer/director Adam Elliot (2003's Oscar winning animated short "Harvie Krumpet"), working with far, far, fewer resources, has made a Claymation feature that rivals Pixar's "Up." The two films even share a theme - that of a very unlikely friendship between an elementary school age child and an older man - but where "Up" is colorful, "Mary and Max" is dark gray - and much, much funnier. As a forty-two year old, 300 lb. Asperger's Syndrome sufferer from the Bronx, Philip Seymour Hoffman ("Capote") gives one of his best performances *ever* using only his voice. Elliot makes the controversial decision to use lots of narration, and while most usually object to this, Elliot has tapped Barry Humphries (aka Dame Edna Everage) for the job and the device grows on one. Elliot also paints a picture, on either side of the globe, that is almost unbearably bleak, but the two misfits who live within them, one deadpan the other socially handicapped, don't seem to realize just what a lousy deal they've gotten and in that, Elliot mines some brilliant humor. If Mary's life looks dismal, the letter she receives back from Max Jerry Horovitz is an epistle of a lifetime's confusion over religion, working life and domesticity that is jaw-dropping in its random, hilarious insights and observations. Miraculously but believably, the two find things in common - an obscure television show, odd pets (Mary's Ethel the rooster (who helps overcome Mary's mother Vera's objection to Max's influence, as he does not filter for the age of his audience, by retrieving his return letter from the trash), Max's cat Hal (short for halitosis)), and strange foodstuffs (chocolate hot dogs). The two begin to exchange small gift boxes and photographs and as the years progress and Mary grows up, marries and divorces (now voiced by Toni Collette, SHOtime's "United States of Tara"), they hope to eventually meet face to face. Elliot's work is full of all the love, confusion, pathos and absurdity of the human condition. The script is a stunning achievement, one that has been unfairly overlooked (IFC Films should have stood behind this film more than a one week engagement in L.A. and On Demand airings - hopefully this will change). There haven't been a lot of movies about long term correspondence ("I Sent a Letter to My Love (Chère inconnue)" and "84 Charing Cross Rd." spring to mind) and one of the joys of Elliot's script is its underlying subtext on the lost art of letter writing itself. When Max's inability to end his streams of consciousness result in P.P.P.P.P.S's, Mary childishly returns P.S.S.S.S.S's. Visually Elliot's crafted his lumpen world with a pallet so devoid of color it almost looks black and white (i.e., gray), and yet his images charm. Mary has the look of an amalgamation of old comic strip heroines, Peanuts' Marcie among them, whereas Max is a cross between Shrek and Zippy the Pinhead. One constant splash of color is the red pom pom, sent by Mary to Max which he affixes to the top of his stocking hat. All animals look bedraggled. "Mary and Max" is a stunning and original achievement in animation for adults. It's got everything, including an ending that should make you weep.