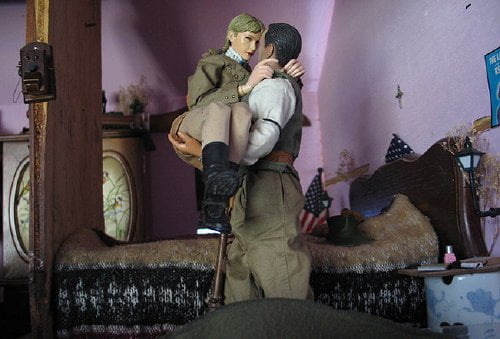 Mark Hogencamp was attacked by five men at a local bar and brutally beaten into a coma. While he physically recovered, his brain was severely damaged and he had to learn, again, how speak, walk and write. But, with no memory of his past, he had to find a way to rebuild his mind and life. His therapy? Create a WWII village complete with soldiers, citizens and military hardware at 1/6 scale of the real thing in his town called “Marwencol.”

In April of 2000, Mark Hogancamp was attacked by five men as he left a bar in his hometown of Kingston, NY. He was so badly beaten, paramedics had to revive him. After 9 days in a coma and 40 in the hospital, Mark's damaged brain retained little memory and his health insurance left no additional funds for therapy, so Mark poured his feelings into his back yard with a WWII story populated by dolls living in a 1/6th scale Belgian town called "Marwencol." After a few years of Marwencol, its creator began to photograph the ever changing story and his pictures are so unique, completely free of irony and full of drama and real emotion, that Tod Lippy, the editor of art magazine Esopus, ran a feature on them. This is where director Jeff Malmberg was introduced to Hogancamp, but he structures the documentary with a historical time line, leading up to Hogancamp's introduction to the art world and to a startling revelation. "Marwencol" is either an amazing example of self therapy through art or the most elaborate ploy to get laid ever. Then it gets really weird. Hogancamp is an enthralling subject and his creation endlessly fascinating on multiple levels. Mark was able to relearn some of his past life through journals he had written. He was once married and he was an alcoholic. The hub of activity in Marwencol is a bar, but Mark's alter ego, the heroic Captain Hogancamp, only drinks coffee. Women are hugely important in Mark's life and they all become characters in his town - the former married neighbor he hugely crushes on, a couple of coworkers (Hogancamp retains part time employment in a local tavern), his ex. One, Mediterranean Lisa, dumps her hunky Navajo boyfriend for Steve McQueen on a motorcycle and later one begins to notice that much of Hogancamp's clothing has a Native American design. There are Nazis about and the Captain must face Mark's demons. Good thing there are a lot of rocking women around to save him, "Kill Bill" style. One even uses a time machine in her attempt to secure the Captain's affections. What is amazing about what Mark does is that everything is exact, a perfect replica of people and places miniaturized. He uses some Barbies, but most of the dolls are individualized and wear things like leather jackets with hand painted logos. The hinges on a barn door are not only just the right size, but they're weathered. The man who had to relearn motor coordination has made maps and battle plans all drawn to scale. He drags his Captain's Jeep over a hundred miles along Kingston's roads in order to make sure its tires don't look new. He even places his characters and objects in such a way that their natural landscape looks like their own world. When the outside world begins to take notice, Hogancamp is divided, then begins to obsess about his appearance for an exhibit in the city - should he look the part of Bohemian artist? Wear a suit? Just be himself? It's the last that turns into such a surprise, one revealed also in Marwencol. There's something about Hogancamp's art that recalls the 'found art' of "Junebug" or the similar obsession of Henry Darger explored in Jessica Yu's 2004 documentary "In the Realms of the Unreal," and, like them, something a little creepy about it too. The director says he keeps Hogancamp's secret until near the end of his film so people will not make snap judgements, but the wonderful original music by Ash Black Bufflo accentuates the weirdness. Still, Malmberg's made the right decision, his feed of information building into a greater whole, much like his subject's art.