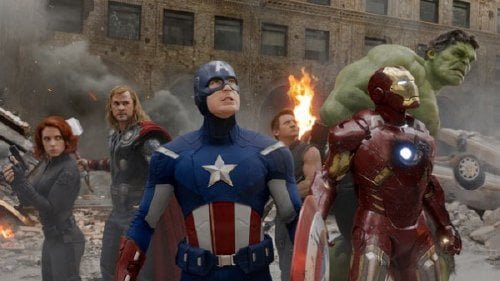 Cowriter (with Zak Penn ("X-Men: The Last Stand," "The Incredible Hulk")/director Joss Whedon (TV's 'Buffy the Vampire Slayer') may not have made the most cinematic of the Marvel Super Hero films, but it may be the most fun. Marvel Studios' cunning strategy has paid off - by introducing each major player still directly in their control, not only did they fare surprisingly well with such characters as Thor and Captain America, but pulling them all into one movie was completely in their control. And with "The Avengers," the whole proves even better than the sum of its parts. After a doomsday style beginning which sees a S.H.I.E.L.D. research facility destroyed and its lead scientist, Selvig (Stellan Skarsgård, "Thor") and Avenger Hawkeye (Jeremy Renner, "Thor") enslaved by Loki's mind control, S.H.I.E.L.D. begins to call in its Avengers in a humorous series of global retrievals. Natasha Romanoff, aka the Black Widow, (Scarlett Johansson, coming into her own here), is humoring a bunch of Russian thugs who think they're torturing her when she gets her call to travel to India where Bruce Banner, aka The Hulk, (Mark Ruffalo, taking over for Edward Norton and becoming MVP in the process), is doing charitable work as a medical doctor. Agent Phil Coulson (Clark Gregg, "Iron Man," "Thor") disrupts Tony Stark's (Robert Downey Jr., "Iron Man") play with Pepper Potts (Gwyneth Paltrow, "Iron Man") at his new Manhattan high rise to pick up where Selvig left off and Fury engages Captain America (Chris Evans, "Captain America: The First Avenger") to get back the Tesseract. The former Steve Rogers is joined by the Black Widow and Iron Man and travels to Stuttgart where Loki has begun his plan to dominate Earth (only a Holocaust survivor stands up to him before he's captured). Loki is held in a Hulk-proof chamber on S.H.I.E.L.D.'s flying aircraft carrier, but he has a secret plan to use the Avengers against themselves. And it is this that makes the film so enjoyable - conflict. Penn and Whedon's script is peppered with put downs, as each Avenger has reason to dislike or be jealous of another. Layer over that the entire group's distrust of S.H.I.E.L.D. when they discover the agency plans to use the Tesseract for WMDs after it learned about other worlds (in "Thor") and there's a whole lot of finger pointing going on. There's also a lot of head bashing, which, with The Avengers, is like an elaborate game of rock-paper-scissors. Once they are under attack - first with S.H.I.E.L.D.'s helicarrier being damaged, later when Loki calls forth an alien attack on Manhattan, the Avengers all prove themselves to each other stepping up to the plate and working as a team. In the latter going, the movie weakens, however. It is inevitable that comparison between the final attack on Manhattan and the destruction of Chicago in the third "Transformers" movie will be made because there are too many similarities, right down to the mechanical flying 'creatures' from Chitauri vs. "Fallen's" giant drill bit. If it weren't for all the wisecracking, Bay's last act would trump Whedon's. By far, Whedon's funniest effect is The Hulk, whose fist here is the equivalent of that city bus which so often takes someone out in a nanosecond edit. Ruffalo downplays the torment and gives a quiet, thoughtful performance. It remains unexplained, however, why The Hulk becomes a team player after his first appearance is anything but. Downey Jr.'s still the quickest on his feet in the quipping department, but Tony Stark does get to prove Steve Rogers wrong when his inorganic heart grows three sizes. Chris Evans doesn't mire Rogers in earnestness, a slippery slope, and has some fun reacting to a future he's barely gotten to know. Johansson rocks her leather jumpsuit and is given some emotional heft in her interplay with both Loki and Hawkeye. Chris Hemsworth has the toughest job, part apologist for his wayward brother, part too-good-for-the-rest-of-you-humans, neither offering much room for jokes. Tom Hiddleston's Loki is like Richard E. Grant crossed with Klaus Nomi and his performance is a hoot. Gregg has been wry connective tissue among the Marvel movies and here, his agent has his biggest hand in the action yet. Paltrow, notably costumed barefoot in cutoffs, leaves one wanting more of her peppery playfulness. 'How I Met Your Mother's' Cobie Smulders joins the cast as Agent Maria Hill, Fury's right hand, but she's not given enough to do to leave much of an impression. Watch for plenty of cameos including Harry Dean Stanton as a startled security guard and Stan Lee himself as an interviewed skeptic. Paul Bettany resumes the voice of Iron Man's Jarvis and Lou Ferrigno 'articulates' The Hulk. This edition is in 3D, which, once again, doesn't really add much but does plunge the World Security Council into such deep shadow it's hard to tell who Fury's talking to (Powers Boothe and Jenny Agutter among them). But despite all the action and costumes and super heroes and aliens, Joss Whedon's Marvel outing doesn't succeed so much on flying fists and hurled hammers as it does on how its words are wielded.