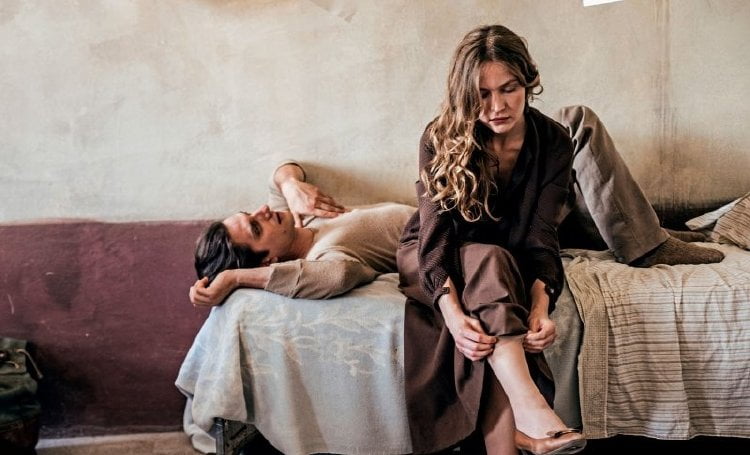 After catching the eye of Margherita (Denise Sardisco), who asks him to dance and later joins him for more on a pier in Naples, a merchant sailor awakens alone to witness a young man being beaten and rushes to save him from the brute.  In thanks, Arturo Orsini (Giustiniano Alpi) takes him into the bosom of his wealthy family where his sister Elena (Jessica Cressy) will make an indelible impression on the life of “Martin Eden.”

Cowriter (with "Gomorra's" Maurizio Braucci)/director Pietro Marcello adapts the 1909 Jack London novel with a 1970’s Italian sensibility that is both a plus (intense political discourse, cinematic nostalgia) and a minus (the film’s ‘pop’ soundtrack dates the film).  “The Old Guard’s” Luca Marinelli’s intense performance gives the oftimes bumpy film an engaging through line even as his character’s philosophies become increasingly muddled.  Some streamlining of this complex saga should have been in order for balance, clarity and pacing.

Martin is an attractive man sprung from Naples’ lower classes.  Although he is gratefully welcomed by the sophisticated Orsinis, matriarch Matilde (Elisabetta Valgoi) draws the line at her daughter’s romantic inclinations.  It takes some time for Elena to become as besotted as her poor suitor, the university student impressed by his appreciation of the arts but fully aware of the drawbacks of his lack of formal education.  But while she encourages him to return to primary school, Martin, determined to now make his living as a writer, heads right for a college admissions panel where he promptly strikes out.  Stubbornly, Eden decides to learn by doing, but his continual stream of rejections and lack of income cause his fed up brother-in-law Bernardo Fiore (Marco Leonardi, "Cinema Paradiso") to toss him out, despite the sympathetic support of his sister Giulia (Autilia Ranieri).

We see how his obsession shapes his character in ways that are troublesome.  Out with Elena and others at an outdoor café, he fails to acknowledge and disparages their waitress, Margherita, even as Elena compliments her beauty.  He denies his own class’s efforts to achieve rights through unions and a socialist platform, insisting instead that this will keep them in ‘slavery.’  This is leavened somewhat by his kindness to Maria Silvia (Carmen Pommella, HBO's 'My Brilliant Friend'), a widowed peasant traveling with her two young children who invites him to board with them on the outskirts of Naples.  This part of the film is reminiscent of Vincent Minnelli’s “Lust for Life” with its artist embedding with rural peasants to hone his craft surrounded by natural splendor while falling out with the local shopkeeper, first for penury then politics.

With a borrowed suit from Maria, Martin heads back into town for Elena’s birthday celebration and we can readily see his lowered stock, Elena pushing him to follow in the footsteps of her father’s accounting protégé Enrico Gargiulo (Sergio Longobardi), her mother outwardly hostile.  He falls in with poet Russ Brissenden (Carlo Cecchi) on the road out, a man who has a strong influence on his future, but it is at this point that the film really begins to waver.  His work is finally published, but his anti-Capitalist political outburst at the Orsinis’ dining table finds him rejected by Elena.  After a disorienting jump in time, the film’s final act features a debauched, angry and very successful Martin raging against everything, including his former bourgeois girlfriend whose mother even finds a change of heart along with his financial gains.

Marcello utilizes snippets of old silent films and random flashbacks to Martin as a child, one in which he dances with his young sister repeated throughout, a moment of pure happiness ironically found in poverty.  But his editors never achieve a smooth flow and Marcello’s narrative at times seems contradictory, Eden’s political viewpoints difficult to pin down.  The film’s message could be misconstrued as ‘don’t reach above your station in life,’ instead of London’s critique of individualistic ambition versus socialism.  What keeps us engaged is Marinelli’s commitment, the film’s old world romance as conveyed by cinematographers Alessandro Abate and Francesco Di Giacomo and the period trappings of an unspecified era as realized by a bygone one.