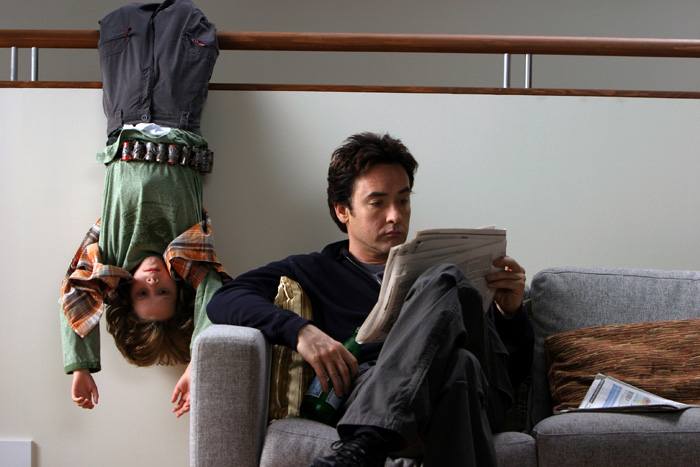 David Gordon (John Cusack), recently widowed, is a science fiction writer desperate to overcome his grief. How to do so? Why, adopt a child, of course. The problem is the boy he selects is excessively weird and troubled. So much so, that David may be well over his head with his decision to adopt the “Martian Child.”

This Sundance hit is a tour de force feature debut by writer/director Sean Durkin, who melds past and present like one flowing stream to build the cause and effect of becoming ensnared in a cult. The film is creepy and disturbing and convincing in its portrait of a young mind splintered and reshaped by unnatural experiences packaged philosophically as the true way by a charismatic older man. Casting by Randi Glass and Susan Shopmaker is inventive and inspired, a mix of speciality names and unknowns who meld together just so, and Elizabeth Olsen blazes as the scared and damaged girl who's slipping into psychosis. Whether intentionally or not, Durkin has created Exhibit A for the release of John Waters' favorite Manson Family member, Leslie van Houten. What's so unique about "Martha Marcy May Marlene" (the title, so difficult to remember, is impossible to forget after seeing the film, especially the way Durkin teases the identity of that last name out) is how it so seamlessly shifts from the present into flashbacks, Durkin and editor Zachary Stuart-Pontier meticulously matching scenes. This has the added effect of letting us into Martha's mental state, how sounds and sights plummet her from the (relative) safety of her sister's vacation home back into her recent, horrific past until she sometimes can no longer can tell the difference. Durkin constructs Martha's past from her innocuous, friendly introduction to Patrick (John Hawkes, "Winter's Bone," "Contagion"), the farm's leader, by way of Watts (as in Tex Watson?) by way of Zoe (Louisa Krause, "Taking Woodstock"), a female friend. It's Patrick who dubs her Marcy May, but it's the oldest of the women, Katie (Maria Dizzia in another breakout role), who assures her that she will find her place, who doesn't pressure her, who comforts her....after, well, her 'special night' of full indoctrination. Martha/Marcy May fits in so well, Patrick writes a song for her and she's given a new recruit, Sarah (Julia Garner), to 'teach and lead' on her very own, and if these scenes are ominous, well, it gets worse. Lucy and her architect husband Ted (Hugh Dancy, "Our Idiot Brother," SHOtime's "The Big C") are vacationing in a massive house with huge windows overlooking a lake (the house itself becomes quite significant). Lucy drives several hours to get Martha, who only tells her sister that a boyfriend has lied to her and she has left. Lucy is frustrated, guilty and worried and afraid to push too hard. But Martha's behavior is odd - she strips off her clothes and jumps into the lake naked with Ted. Her manners are crude. When the couple, in the midst of making love, suddenly realize Martha is curled up at the end of their bed, they really begin to worry. Martha parrots back the reasons Lucy gives her for the inappropriateness of her behavior. When Martha asks Lucy if she 'hears something on the roof,' it's dismissed as falling pine cones, but the distress caused Martha to wet herself. Meanwhile the stress of taking in a family member who more and more clearly needs mental help can be seen chinking away at the new marriage. Olsen is just fantastic here, at first a lovely quiet girl on the farm, later scared and confused, then dreamily paranoid with her sister. Durkin's given the character every reason to shield her past from her sister. Paulson walks on eggshells with deep concern, Durkin's gradually revealed family history shoring up the behavior of both. Dancy's a nice, if entitled, guy who's pushed too far, whose behavior we see paralleled in his sister-in-law's history. Hawkins underplays, which works immeasurably for Durkin's deliberate set up. Dizzia makes for the perfect follower, astonishing in her ability to bridge extremes. Cinematography, production design, costume and score all meticulously work together to help create Durkin's vision of a shattered psyche trailing potentially lethal bread crumbs in its wake. "Martha Marcy May Marlene" is the type of new American classic Sundance so rarely produces anymore. It's got a creepy, suspenseful build and one of the best endings of the year.

John Cusack has always been, since he first came on the movie scene, one of my favorite actors and one whose work I always look forward to, even if the finished product is less than good. Here, though, in director Menno Meyjes saccharine venture, his talents are sorely challenged to overcome the derivative and predictable screenplay by Seth Bass and Jonathan Tolins (adapting David Gerrold’s titular novel). David is obviously forlorn and swinging in the breeze emotionally. When he comes up with the idea to adopt, his sister Liz (Joan Cusack), the voice of reason, warns him about just how difficult a job raising a child can be. He ignores her advice and visits a local orphanage where he (sort of) meets Dennis (Bobby Coleman), a reclusive youngster who spends all his time in a large cardboard box with a slit his only view to the world. Even when David learns that Dennis claims to be from Mars, he persists in trying to endear himself to the boy (at one point in an annoying “tribute” to the Reese’s Pieces scene in “E.T.”). Of course, David’s attempt to adopt Dennis is met with question and concern, not just from sister Liz but also from the members of the adoption board, headed by Lefkowitz (Richard Schiff). Their concern is that Gordon is not suited for the special needs of a child like Dennis but they reluctantly allow a trial period for the potential father/son. When Dennis goes home with David, the hopeful “father” bends over backwards to let the boy be himself. Dennis never loses his alien cloak, though, and David becomes increasingly frustrated with the child. He uses his imagination to bring Dennis out of his fantasy shell but his work, a promised sequel to his very popular recent book, is going nowhere, much to the chagrin of his publisher, Mimi (Angelica Huston). Things get iffy on both the parenting and career fronts for the author as he follows through with his plans. I did not read David Gerrold’s novel, but I do know when a screenplay is pushing my buttons. I came out of seeing “Martian Child” feeling bruised all over from all of those said pushed buttons. While I like Cusack (not at his best here), I found that the casting and direction of young Bobby Coleman to be a failed attempt at playing cute. The exaggerated makeup (I guess that pasty face, seeming collagen-enhanced lips and overly made up eyes (as if Dennis cries the entire time he is off screen)) is annoying but the boy’s cloying line delivery made me cringe. I thought Dennis to be more creepy than cute and the character single-handedly turned me off from “Martian Child.” The veteran supporting cast, including John’s real sis Joan, Amanda Peet (in a tacked on-feeling character role), Sophie Okonedo (as the orphanage director), Oliver Platt (as his book agent) and the always reliable Richard Schiff, do their best with the material at hand but that material feels forced and artificial. Techs are solid but they cannot overcome to treacle-encased script that made me want the film to be over. A story that has me checking the time, frequently, is telling. That I did not lose myself in the supposedly emotion-driven tale is also telling and it tells me that “Martian Child” is not aimed at the discerning filmgoer but those that do not mind being manipulated.