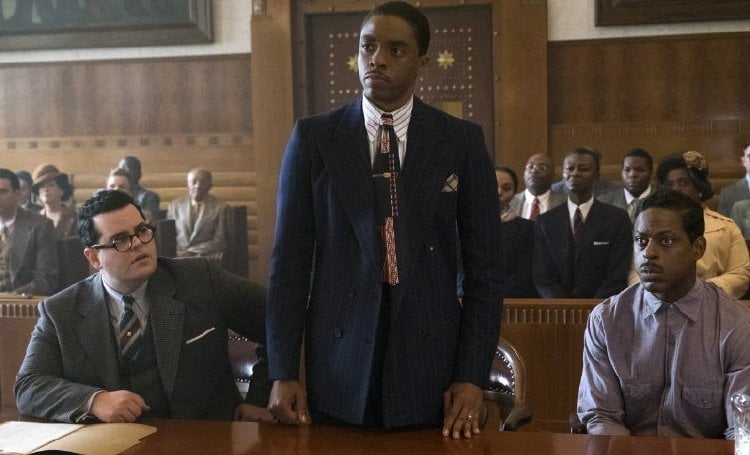 Thurgood Marshall (Chadwick Boseman) served as Associate Supreme Court Justice with distinction for a quarter century and was the first African American to serve that court. Before that he was a dedicated champion of civil rights and, in 1941, as lawyer for the NAACP, he fought for those rights in the case of the State of Connecticut versus Joseph Spell in “Marshall.”

Before he became the first African American member of the United States Supreme Court, Thurgood Marshall (Chadwick Boseman, "42," "Get On Up") was an NAACP lawyer who traveled around the country defending those the organization believed were innocent, yet accused because of their race. In 1940, awaiting the birth of his first child, he was sent by Walter White (Roger Guenveur Smith, "The Birth of a Nation") to Bridgeport, Connecticut, to look into a case more typical in the South, that of a white society woman, Eleanor Strubing (Kate Hudson), who'd accused her black chauffeur Joseph Spell (Sterling K. Brown, TV's 'This Is Us') of rape and attempted murder. As an out of state attorney, the NAACP needed to hire a local man, Sam Friedman (Josh Gad, 2017's "Beauty and the Beast"), to file a motion to get Marshall on board. The prosecuting attorney, Loren Willis ('Downton Abbey's' Dan Stevens), was a known racist and the son of the judge's former law partner. Judge Foster (James Cromwell) allowed Marshall to join the team, but forbade him from speaking in court or interviewing any witnesses. Screenwriters Jacob (2015's "Macbeth") and Michael Koskoff have taken some liberties with the facts (I was unable to confirm if the jury foreman was female, which seems unlikely in 1940), but the basic outline of the case is here. Director Reginald Hudlin ("House Party") casts his protagonist like a Western hero, a confident do-gooder who rides into town, deputizes a local, then rides off into the sunset. Marshall is not the story's lone protagonist, instead his partnership with Friedman the film's engine. Friedman is presented as an insurance lawyer conned into working on a case he believes will adversely affect his family and his practice. Acting as Marshall's mouthpiece, the lawyer learns not only criminal defense but the underlying racism in his northern state. As a courtroom thriller, the film checks all the boxes, but it's not particularly memorable. What one may come away with instead is Gad's development from reluctant defense attorney to committed civil rights defender under Marshall's tutoring. Boseman's having quite the career portraying prominent real life African Americans and his Marshall is one of unyielding confidence, even swagger (in an early scene, he doesn't flinch before three armed bigots, he mocks them). The filmmakers contrast black accomplishment (we meet Langston Hughes ('Empire's' Jussie Smollett) and Zora Neale Hurston (Rozonda 'Chilli' Thomas) in a tacked on scene) with black repression (Bridgeport's NAACP chapter head Ted Lancaster (Derrick Baskin, TV's 'Difficult People') holds a law degree but drives a truck for a living) with more success outside the courtroom than within its halls. "Fruitvale Station's" Ahna O'Reilly is tart as Mrs. Richmond, the white female juror Marshall surprises Friedman by accepting and one wishes there were more of Barrett Doss (TV's 'Iron Fist') as Lancaster's shrewd wife. There's still a movie to be made about Thurgood Marshall, but Hudlin's genre film casts him in impressive light. Grade:

Reginald Hudlin directs the script by Jacob Koskoff and Michael Koskoff that tells of just one of the many cases Thurgood Marshall tried for the civil rights of African Americans in the years before coming to the Court. The case that attracted the NAACP lawyer involved the rape and attempted murder of a wealthy white woman, Eleanor Strubing (Kate Hudson) in Greenwich CT, by her black chauffeur, Joseph Spell (Sterling K. Brown.) Hudlin and company create a straightforward, by the numbers account of one of Marshall’s early cases. Thurgood travels far from home when he enters the Connecticut court to represent Spall in the controversial case. He is immediately hampered by a prejudiced Judge Foster (James Cromwell) who refuses to allow Marshall to be attorney of note, refuses to let him talk in court or question the witnesses. Marshall recruits a local lawyer, Sam Friedman (Josh Gad), who, much against his will, must be the voice of the defense. This begins a manipulation of the court, by Marshall, as he and Sam dig into the tawdry case to prove Joseph’s innocence. “Marshall” does an earnest job in telling this small slice of the illustrious career of Thurgood. The lead characters are well-played by Boseman and Gad, although I felt that the concentration of the story centers on Sam Friedman as the unwilling enlistee in the early Civil Rights movement. Boseman is solid as Marshall but Sam’s character has the biggest character arc. The supporting cast has some notable character actors with Cromwell, Hudson, Brown and Dan Stevens (as the sniveling, bigoted prosecutor). These characters, though, are two-dimensional, at best, so I never invest my sympathy or scorn in any of them. The production, from costume to set and period feel are well done and fit the feel of the time “Marshall” gives us a look at a small but significant civil rights case that helped form the future Supreme Court jurist who helped decide some of the country’s most landmark cases.