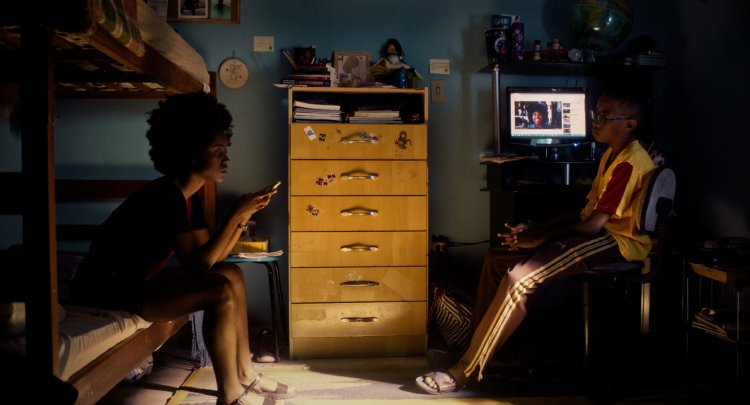 The night sky is full of stars.  We can hear fireworks and the faint honking of car horns, then an explanation – ‘Bolsinaro!’ - shouted in jubilation.  It is the eve of his election and a young, black Brazilian whose hopes should be dashed by this news instead lies looking towards the sky, dreaming of a future with “Mars One.”

Writer/director Gabriel Martins, part of a filmmaking collective contributing to the Black Brazilian cinema movement, gives us something old and something new with Brazil’s submission for the 2023 International Oscar, a straightforward family drama full of heart with a suggestive sprinkling of magical realism.  His exceptional cast of veterans and newcomers may relay their trials and tribulations and inter-generational conflicts with fear and frustration, but one always feels the love that bonds this family.

The clashing dreams of children and their parents have a long cinematic history.  Here we have a father, Wellington (Carlos Francisco, "Bacurau"), who works as the senior custodian of a condo building and routinely gets taken advantage of by its manager.  Wellington has high hopes for his son Deivinho (newcomer Cícero Lucas) in professional soccer, a pipe dream brought a little closer to earth when Cruzeiro footballer Juan Pablo Sorin moves in promising to watch the kid play.  Deivinho confides to older sister ‘Nina’ (model and dancer Camilla Damião) that he has no desire to pursue football, instead wishing to be an astrophysicist on the Mars One project (which would eventually be revealed as a Danish scam after procuring millions in investments).

Wellington and Tercia (Rejane Faria) have no concerns about Eunice (Nina’s actual name) as she’s going to law school, but when she announces she’s looking at apartments, the objections roll in.  Assuring them that she will split costs with fellow student Joana (Ana Hilãrio), they insist on meeting her and Joana taking Nina’s hand as the family watches soccer does not go unnoticed.  This generational division is unspoken, as will be the touching olive branch dad eventually extends.

It is Tercia who has the most surreal experience.  Working odd jobs cleaning and catering (Brazilian TikTok star Tokinho is a client and friend), Tercia is sitting at a lunch counter one day when a man comes in loudly announcing to all how his life has been ruined by the loss of his job and his cheating wife.  He says he is going to kill himself and pulls out sticks of dynamite which he lights.  Tercia cannot get away quickly enough and is caught in the ‘blast’ only to be confronted by a television crew assuring her that the entire thing was a ‘prank.’  But Tercia is not assured, she is shellshocked and horrific things seen to keep happening around her.  Convinced that she is like a divining rod for bad luck, Tercia tries to leave town, but that same bad actor shows up in the bus station, a diversion that reaps most surprising results on the same day Wellington is betrayed by his coworker Flávio (Russo Apr) and a scheduling conflict between dad’s wishes and his own drives Deivinho to take decisive action.

Francisco is the veteran actor among the cast and he creates a complex character, a man who has overcome alcoholism to support his family but is unable to see his children behind his own dreams for them.  Faria portrays a true earth mother, a lover of life and keeper of the peace whose conviction that she is a magnet for bad juju isn’t understood by her family.  But it is the relationship between the two newcomers, the striking Damião and Lucas that is the film’s most touching, the two separated by some years but completely supportive of each other’s life decisions.

Cinematographer Leonardo Feliciano creates some memorable images, our first sight of Deivinho lying in profile like a rising planet.  In the film’s best scene, he looks up, like that opening moment, from a bottom bunk bed to a sister who looms from the top like a celestial beauty.  Martins creates individual lives for each of his family members before pulling them all back together with new insights into each other.  “Mars One” is a warm-hearted film about the strength one finds in family when the world seems to be working against you.

Young Deivihno (Cicero Lucas) is a gifted budding athlete but his real dream is to become an astrophysicist and travel to the stars. His dad, Wellington (Carlos Francisco), works in a numbing job and dreams that his son will become a soccer star and change his life for the good. These two dreams will be the cause of a family crisis in “Mars One.”

Writer-director Gabriel Martins takes us into the Martins household at a crucial time for Brazil. It is 2018 and Jair Bolsonaro is inaugurated as the far-right president of the nation. This sets the stage for the story of a lower class family’s struggle to make ends meet in a world that will be tainted by government greed and corruption.

While soccer plays prominent in this heartfelt saga, it is the family’s dynamics that are the real draw. Deivinho wants to be a scientist and join the first mission to Mars. Wellington, on the other hand, sees his son as his way out of poverty, only to see the plan dashed. Mom Tercia (Rejane Faria) toils to make ends meets and is the subject of a scary media prank. Deivinho’s older sister Eunice (Camilla Damiao), has been closeted but, when she finds her love, Joana (Ana Hilario), she makes it known to the family, with expected conflict.

While this is a family drama, it is foremost a Brazilian family drama and, as such, director Martins brings us into a uniquely distinct environment. Through the Martins family’s eyes, we see local life and celebration in a very specific Brazil way

"Mars One" arrives in select theaters and on Netflix from Array Releasing on 1/5/23.