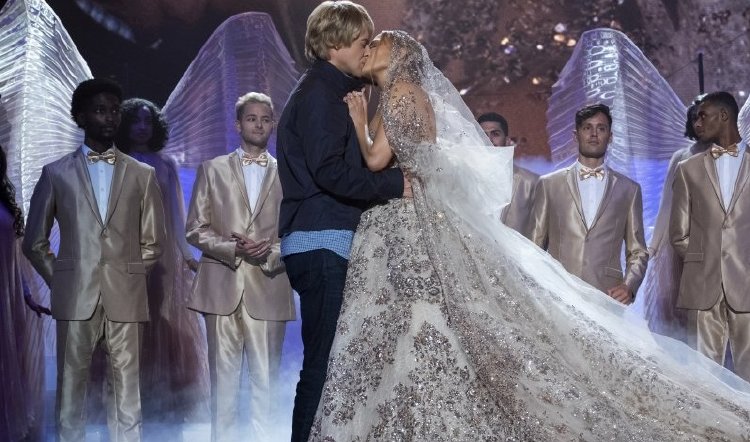 Divorced math teacher Charlie Gilbert (Owen Wilson) is worried that his daughter Lou (Chloe Coleman, "My Spy") is bored spending time with him, so when his best buddy, school guidance counselor Parker Debbs (Sarah Silverman) dangles a pair of coveted concert tickets, he grudgingly accepts.  Lou will be thrilled to learn she is going to witness superstars Kat Valdez (Jennifer Lopez) and Bastian (Maluma) exchange vows after performing their hit single, but she can hardly believe her eyes when backstage drama prompts Kat to choose her dad instead because he’s holding a sign saying “Marry Me.”

Coasting on the charms of its likable stars, this adaptation of Bobby Crosby's graphic novel (John Rogers ("Catwoman"), Tami Sagher (TV's 'Inside Amy Schumer') and Harper Dill (TV's 'The Mindy Project')) is many things – a cross promotional soundtrack launching pad for Maluma, a series of JLo song and dance numbers and, coasting beneath the high profile marketing angles, a meet cute on steroids romcom mashup of the likes of “Roman Holiday,” “Notting Hill” and TV’s ‘The Bachelorette.’

Clinging to the motto that if you don’t like your life, do something different, the thrice-married Kat, humiliated by a viral video of fiancé Bastian cheating with her assistant Tyra (Katrina Cunningham) just before he’s set to take the stage, stuns everyone by pointing at a stranger in the crowd to take his place.  When asked if he will take her as his wedded wife, Charlie answers ‘Okay,’ more interested in helping this distraught woman than marrying a superstar he’d never heard of 24 hours earlier.

After being whisked out of the theater in a limo, Charlie’s dropped off, well convinced that that’s the end of his adventure, so is surprised to be contacted by Kat’s team.  After returning home to find herself the butt of jokes by Jimmy Fallon, she wants to give it a go for a few months, telling Charlie ‘You know what they say to do if your car goes into a spin?  Hit the gas and drive into it.’  It will be no surprise to anyone who has ever seen a romantic comedy that what Charlie thinks is a mere publicity stunt will become genuine, at least until that pesky third act obstacle – Bastian’s desire to reunite with Kat on stage – is overcome.

The film is most realistic pulling back the drapes on celebrity life within the glare of social media and it is no surprise that that wedding stunt had been cooked up by the ambitious Bastian.  Charlie is taken aback when Kat declares them ‘alone’ while a videographer records her every move (not filming, Kat corrects Charlie, but ‘banking,’ while also conceding his point).  Director Kat Coiro takes advantage of the film’s fantastical nature, press swarming the couple to illustrate the drawbacks of fame, but nowhere in sight when a quiet moment is called for.  The point of entry for Kat into Charlie’s world involves his daughter and his and her elementary school math class which is gearing up for a ‘Mathalon,’ where Lou will excel if she can conquer her nerves.  Kat arrives unexpectedly at school one day to the delight of Charlie’s class, especially Lou who he’d purposefully kept away from the media spectacle, and teaches them how to focus by distracting their minds with dance steps.

Lopez has always had a disarming down to earth quality embellished with girlish laugh, making this role tailor made for her.  Amazingly, this is the first time she’s sung in a movie, developing an album of original songs (‘Church,’ ‘Love of My Life,’ ‘On My Way’) for it.  Luckily for us, Lopez and her “Anaconda” costar Wilson are a perfect onscreen match, his low key, good guy gallantry just what a diva desiring to downshift needs.  Another plus is fleshed out supporting characters, Silverman a great buddy foil, "Moonfall's" John Bradley a manager who really cares for his client on a personal level.  And let’s not forget Tank, Charlie’s adorably inert bulldog.

“Marry Me” may be over the top and formula driven, but its cast is charming and its heart genuine.

Kat Valdez (Jennifer Lopez) is not only a world class pop star, she is about to marry her true love, Bastian (Maluma), on stage in front of a viewing audience of over 20 million fans. Then, he is caught in flagrante on a security camera with Kat’s assistant and she sees it instantly on social media. Then, she sees Charlie Gilbert (Owen Wilson), a plain old math teacher, in the crowd and impulsively asks him to “Marry Me.”

Under normal conditions I do my best to avoid rom coms, especially those that showcase big pop stars. So, my radar should have gone into full alert mode when I watched director Kat Coiro’s unlikely fairytale romantic comedy. I mean, it has Jennifer Lopez playing Kat Valdez, the fictional diva stand-in for J-Lo, and I should have not liked it, but for Owen Wilson.

Wilson is the loving, though-not-much-fun-anymore widowed dad of his adolescent daughter, Lou (Chloe Coleman), a girl who is at just that age where she does not like her father. Charlie, of course, bends over backwards for the girl, even agreeing to take her to the big Kat/Bastian concert which ends in Kat’s the proposal to Charlie to marry. This is a fairy tale of course, so leave logic at the door and enjoy what is a very likable romantic comedy. This is due, in major part, with the nice chemistry between Kat and Charlie, with her supplying the glamour and he just good common sense and humor.

I have been getting jeers from friends and those who know me for becoming a sentimental sap over “Marry Me.” Well, I am when I see a rom com that is both romantic and funny. Plus, J-LO fans will get a bunch of her songs, including that of the title. It is not my musical cup of tea but definitely belongs here.

“Marry Me” has a good heart and a message of cove quite appropriate for this time of year.

Universal releases “Marry Me” in theaters and on Peacock on 2/11/22.