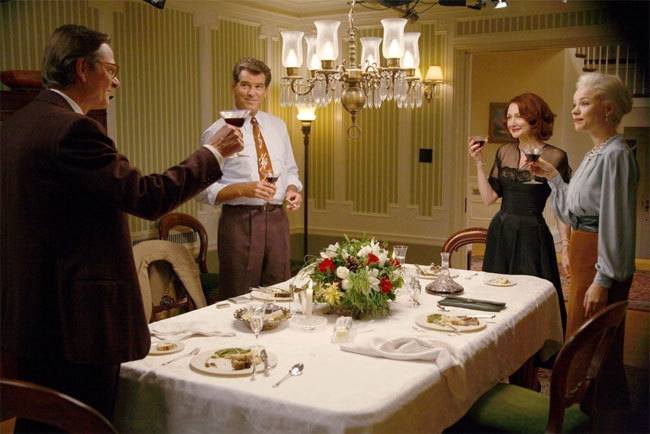 Harry Allen (Chris Cooper) has fallen out of love with his wife Pat (Patricia Clarkson) an in love with much younger Kay (Rachel McAdams). He doesn’t want to put poor Pat through a humiliating and messy divorce so he comes up with an alternate plan – murder – in “Married Life.”

This is a period melodramatic potboiler that has an OK (though predictable) story arc and benefits from its exemplary cast and terrific attention to post-WW II New York detail in costume and set. But, the fine cast is saddled with less than 3D characters as Harry comes to the rather illogical conclusion that murder is preferable to divorce. Patricia Clarkson is a little too progressive thinking for the era and Rachel McAdams is little more than pretty window-dressing. Pierce Brosnan is both kindly and a cad as he commiserates with Harry but has no qualms in snaking Kay away from his best friend. I’m not familiar with John Bingham’s source material, Five Roundabouts to Heaven, but the adaptation by helmer Ira Sachs and Oren Moverman is wooden in its execution. In the end, I thought it a little too tidy and happily-ever-after.