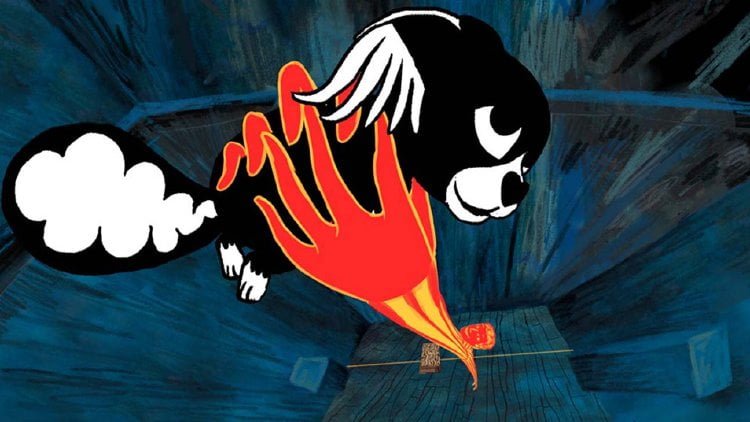 ‘This is point zero,’ a little dog tells us, ‘a smudge on the asphalt.’  As cars zoom by on either side and her mistress Solange (voice of Shyrelle Maï-Yvart as child, Maïra Schmitt as teen) lies parallel, comforting her, life passes before the eyes of the mongrel as she regales us with “Marona’s Fantastic Tale.”

Based on an idea by director Anca Damian (and written by her son Anghel), this story about the little things that bring happiness to a dog who passes among four different owners may In some ways be reminiscent of “A Dog’s Purpose,” but it is less sentimental, more realistic about how humankind can file away casual cruelties amidst their busy lives.  Little Marona (voice of Lizzie Brochere) has much to teach us about life’s priorities and she does so within a uniquely animated world based upon the work of Belgian cartoonist Brecht Evens.  (And for those who worry about whether the dog dies, the answer is given in the film’s opening moments.)

The first thing we learn is about Marona’s mixed parentage, a kind of reverse “Lady and the Tramp.”  As the ninth in a litter of nine (Nine, insists the continually renamed puppy, is her real name), is given to her dad’s owner (the animators bring her into existence with a lap of her mother’s tongue, using it like a paintbrush).  But although the threatening looking Dogo Argentino fell hard for mom (portrayed literally as its sharp teeth melt), it cowers from parental responsibility and its owner sells the pup to a drunken street acrobat in a shady bar.

Yet Marona is thrilled by Manole (voice of Bruno Salomone), rapt by the man’s graceful athletics (he undulates in forced perspective, the little black and white dog with a heart for a nose and wings for ears held aloft) and calming voice.  She becomes part of his act, until he is lured away by an empty suit offering fame, the dog abandoned to be found by Istvan (voice of Thierry Hancisse) at a construction site.

A big brute with a tender heart, Istvan tries to do right by the little stray, bringing it food and water until construction is finished.  But in trying to find a solution for the dog’s plight, he brings it to his sickly mother (voice of Annie Mercier) where Marona is grievously injured in an accident.  Istvan’s flighty girlfriend Madalina (voice of Isabelle Vitari), all curvy calves and wavy hair, then decides she is the perfect accessory, but that is short-lived and Marona senses when Istvan throws his last ball to her.  She will be found next by Solange as a little girl, whose overwhelmed single mom Medeea (voice of Nathalie Boutefeu) gives in even as Grandpa (voice of Georges Claisse) wants nothing to do with the dog (both will grow to appreciate her).

The Damians illustrate indignities large and small that their dog will endure, beginning with absolutely everyone’s assumption that she is a he.  Even those who love her let her down, the selfishness of a teenager having devastating impact.  But, as reflected by the lyrics of the movie’s original song ‘Happiness,’ the little pup understands the joys of a comfortable bed or a homemade crepe, befuddled by humankind’s constant desire for something more.  This beautiful story is animated with uniquely surreal visuals, the dog’s nose bringing botanicals to life like a rippling underwater garden while all human environments are blocky, cluttered or seedy.

A dog lies in the road, hit by a car. A girl rushes to her side and lies down with her. The injured pet “rewinds the film of my life” and this begins “Marona’s Fantastic Tale.”

The happy/sad life of a little dog (Lizzie Brochere) is the story told by director Anca Damian and writer Anghel Damian in a unique display of animation style with a tale that is simple and often heartbreaking.

We follow Marona’s life from her birth, loving and learning from her mom, to her first owner, acrobat, juggler and street performer Manole (Bruno Salomone), where life is a joy. Then, she is adopted by the kindly Istvan (Thierry Hancisse) and his self-centered and not as kind sister, Madeea (Nathalie Boutefeu) and, finally, to a little girl, Solange (Shirelle Mai-Yvant, the younger, and Maira Schmitt, the adolescent). Marona brings something special into each life she touches.

“Marona’s Fantastic Tale” is, as said, a simple story but one that is touchingly real, often happy and often sad. The makers draw out the dog lover in me and evoke a great deal of empathy and hope for the little girl. In the end, it is a fantastic tale.