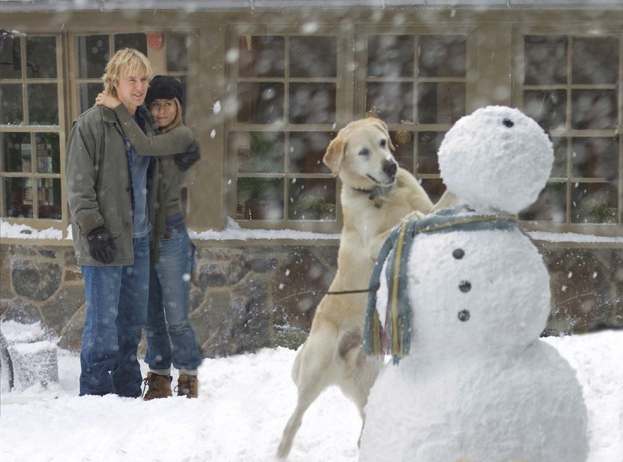 John Grogan (Owen Wilson, "The Darjeeling Limited," "Drillbit Taylor") is thrilled when fellow journalist Jennifer (Jennifer Aniston) marries him and agrees to move from the cold of Michigan to the warmth of Florida for her. But when Jennifer's maternal instincts begin to cry out, John's convinced by uber-bachelor buddy Sebastian (Eric Dane, TV's "Grey's Anatomy") to simply give her something else to take care of, and so John surprises his wife with a Golden Labrador puppy and surprises himself when the mischievous pooch ends up driving much of his work in "Marley & Me."

Former South Florida Sun-Sentinel columnist John Grogan's book isn't held in the highest literary regard, but it's not a bad read and any pet owner is bound to get choked up by the end. Director David Frankel, who took the more-maligned "The Devil Wears Prada" and turned it into a hit, has delivered a more nuanced if less consistent film with "Marley & Me," which is less flat-out comedic than the trailers would have one believe. Mature themes such as marriage and the responsibilities it brings raise "Marley & Me" above the fluff it may seem to be and parents should be forewarned that, like the book, the putting down of a sick, aged dog is dealt with straight on. A fantastical blizzard-bound honeymoon night is the jumping off point for the arrival of John and Jennifer Grogan in sunny Florida where she already has a journalism job. John is successful interviewing with Arnie Klein (Alan Arkin, "The Heart is a Lonely Hunter," "Little Miss Sunshine") who nudges the reporter into writing columns. Grogan begins by making fun of the shallowness of the neighboring town, Boca Raton, before Marley enters his and Jennifer's life. The 'clearance puppy' turns out to be wildly destructive during thunder storms, even eating through wallboard, and cannot even be contained in the obedience school led by the drill instructor-like Ms. Kornblut (Kathleen Turner, "Body Heat," "Serial Mom"). Grogan declares Marley 'the world's worst dog,' but Marley is also a great source of material. Marley doesn't delay parenthood very long, either and the Grogans delight in their firstborn son, Patrick. Conor's arrival two years later, however, exhausts Jennifer and Marley's place in the household comes under fire. Sebastian, whose career has gone the way John had dreamed of, lets Marley live his bachelor life a few days until the storm subsides. Baby number three, a girl, finds the Grogans more settled and John's fortieth birthday grounds them even more when he decides to uproot them all with a move to Pennsylvania. But as the family grows, Marley begins to show signs of age and they must all come to accept that the beloved dog who shared the beginning of their life will not be there forever. Screenwriters Scott Frank ("The Lookout") and Don Roos ("The Opposite of Sex") have done a very faithful adaptation of Grogan's book, only excising a lengthy bit where Marley was featured as a movie dog that would have mired this movie down and Frankel mostly maintains a fine balance between the Grogans's family, careers and Marley. The casting of Wilson and Aniston is a little too Hollywood for this family tale, but the actors, especially Aniston, get our buy-in. He does well by dog bonding, she gets at the heart of maternal exhaustion. Frankel paints an idyllic picture of Jennifer and first son being admired by John from the driveway before noticing him and calling him in, then contrasts it later with an out of control Jennifer annoyed that John is still in the driveway rather than in the house helping control the chaos. Marley's continuing exploits are dealt with indirectly in a couple of very well done montages and Frankel shows restraint with a few obvious doggy poop bits. When the old dog hesitates on the steps, it's heartbreaking because Frankel and his cast (including Nathan Gamble, "The Dark Knight, Finley Jacobsen and Lucy Merriam, TV's "All My Children" as the Grogan brood) have done such a nice job of incorporating the dog into family life. Alan Arkin is always a joy to watch and his deadpan editor here is no exception. Eric Dane is a bit stiff as Grogan's womanizing colleague and Kathleen Turner is a big name fit into an almost cameo in one of the film's weaker comedic moments. I have mixed feelings about the film's faithfulness to the source material at story's end. In some respects, sharing Marley's demise with John Grogan seems earned, but considering this is a film that, unlike the book, will be more aimed at family audiences, exposing children to the mechanics of euthanasia may be too much. The extended burial scene which follows gives the two younger actors more than they can handle. "Marley & Me" celebrates family with all its inherent trials and tribulations, but be forewarned it is a serious weepie for anyone who has loved and lost a pet. The animal trainers who handled twenty-two dogs for this film (most in puppyhood) are to be commended.