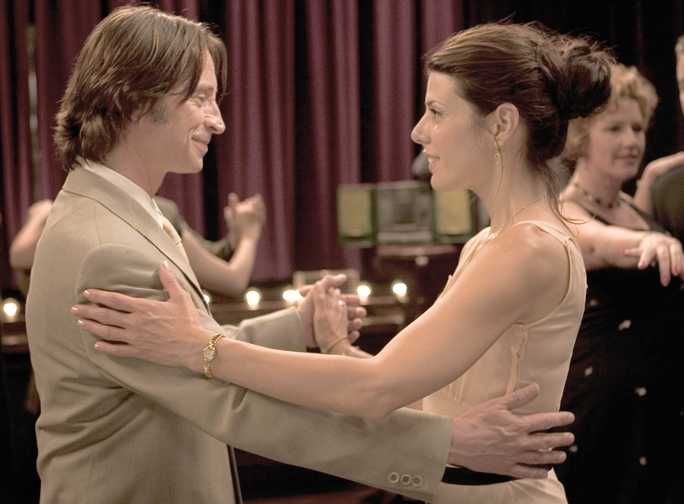 Frank Keane (Robert Carlyle, "The Full Monty") already has a heavy heart when he comes across a dreadful car accident and the dying man inside. Steve Mills (John Goodman, "Masked and Anonymous") tells him of the decades old date he's keeping and begs Frank to take his place and look for the girl he once loved at "Marilyn Hotchkiss' Ballroom Dancing and Charm School."

Writer/director Randall Miller ("Houseguest," TV's "Thirtysomething") developed his fifteen year old short of the same title into this feature length film leaving one wondering just what the obsession was. This movie is two cliches and a bit of nostalgia all crashing against each other for 103 minutes. Another fifteen years of script polishing may have evened out "Marilyn Hotchkiss'" kinks, but while the dance is a mishmash, it does have a few genuinely nifty steps to trot out. After setting up it's 'dying man's last wish' exoskeleton, "Marilyn Hotchkiss" follows the dual strand of Frank Keane's present as Steve's agent at the dance school and as a grieving widower in group therapy and the flashback story of young Steve's kicking and screaming induction to charm school and the little girl, Lisa, who turns his head there. Only the flashback, which plays like a Jean Shepherd ("A Christmas Story") short, really works. And of the cast, which is an embarrassment of character actor riches, only the dance instructresses, played by Mary Steenburgen ("Elf," "Capital City") as the present's Marienne Hotchkiss and Patricia Fraser ("Houseguest") as her mother, the original Marilyn, really stand out. After the well shot introduction, Miller frustrates us with Frank's odd behavior fulfilling Steve's mission. Rather than simply announce why he's there, Frank, a most welcome new male addition, finds an excuse to talk to each woman and asks if she is Lisa. He does find himself drawn to Meredith Morrison (Marisa Tomei, "Anger Management," "Alfie'), a sweet natured woman with a black eye, but he is warned that she's trouble by the voracious Tina (Sonia Braga, "Angel Eyes," "Empire"). Frank continues the tentative attraction despite the glaring looks of class hotshot Randall Ipswitch (Donnie Wahlberg, "Saw II"), who claims Meredith for himself. Miller cuts back and forth from the dance classes to Frank's therapy group (led by David Paymer ("In Good Company," "Capital City") and including Miguel Sandoval ("Nine Lives"), Sean Astin ("The Lord of the Rings," TV's "24), Adam Arkin ("Hitch") and Ernie Hudson ("Miss Congeniality 2: Armed and Fabulous")) and the story of how Steve came to like girls. As stated previously, the flashbacks are charming. The kids seem realistic, Marilyn Hotchkiss herself is an inspired character and a bit of Steve's imagined fantasy is wonderfully weird. The Frank/Steve story is presented hyper realistically, using cool colors versus the flashback's golden glow, but John Goodman's performance drags it down. Goodman pushes his lines out in gasps of air that make Steve sound more like an asthmatic than a dying man. Frank's therapy group full of morose males has been seen numerous times before, although the actors all pitch their individual types well, but if it weren't for Steenburgen, the present day dance class would fail completely. Carlyle's is oddly cast. Tomei brings a genuine sweetness to Meredith that is almost, but not quite, a substitute for chemistry between her and Frank, but her back story, including the revelation of Randall's real identify, is strange. Miller tries to make connections between past and present, such as Meredith and Lisa both getting black eyes and the young Steve being the spitting image of Frank's coworker Sampson (Elden Henson, "Lords of Dogtown"), but the connections are random, and, therefore, meaningless. What does work is Steenburgen's arc. She begins each class as an homage to mother, dead many years, then introduces each new dance with its history. The sliding moves of the merengue, for example, are born from the sugar cane field slaves' shackles, she tells us before chirpily kicking off said dance without missing a beat. As Frank's widowers trickle into the class and everyone begins to pair up, Steenburgen's Hotchkiss is emboldened by her partner to claim the class for herself. "Marilyn Hotchkiss' Ballroom Dancing and Charm School" looks like a labor of love but Miller never achieves an even tone. When Frank finally determines to finish Steve's business at film's end, we face harsh reality, then unbelievable sentiment, then unexpected laugh (and a Danny Devito cameo). Miller's got multiple short films in his head and he should have left them that way.

Though his wife tragically died some time ago, baker Frank Keane (Robert Carlyle) still steeps himself in his grief. While on a delivery one morning, he comes upon a one-car crash and its occupant, Steve Mills (John Goodman), is dying. An ambulance comes and Frank reluctantly agrees to accompany the accident victim. Steve tells him a story of his long-lost love and the promise of a reunion, a reunion that he’ll never make at “Marilyn Hotchkiss’ Ballroom Dancing and Charm School.” Marilyn Hotchkiss…” has a couple of things going for it. It has a solid cast of veteran actors and a real love for ballroom dancing. The varied dance music, from the rumba to the merengue, the Lindy hop and cha cha cha, is a delight to listen to and the choreography that utilizes it ain’t shabby either. Mary Steenbergen, as the proprietor of the school, Marienne (Marilyn’s daughter), does a fine job convincing you of her dedication to her job and her students. Robert Carlyle is OK as the central character but is overshadowed by supporting perfs by Don Wahlberg, Marisa Tomei, Sonia Braga, Adam Arkin, Ernie Hudson and the rest, making him just one of the ensemble. Helmer Randall Miller updates his 1990 short film to feature length and his obvious love for ballroom dancing comes through. It’s not a great film but it does have heart and spirit. The good cast helps things along, especially Steenbergen. The side story, told by dying Steve, is the catalyst for widower Frank Keane to make the journey to the dance school. Still grieving over the loss of his wife, Frank reluctantly agrees to fulfill the dying man’s dream of finding his childhood love. Once at the school, he becomes a changed man as the grace of the dance and its music grab hold of him. He finds a new life and love at Marilyn Hotchkiss’ Ballroom Dancing and Charm School. The film is a bit device driven as it flashes back and forth from Frank’s lonely life to the accident that will change him forever to Goodman’s story of a happy time in his life 40 some years ago. The Steve part of the film is stylish but distracting. I do love the music and the dance.