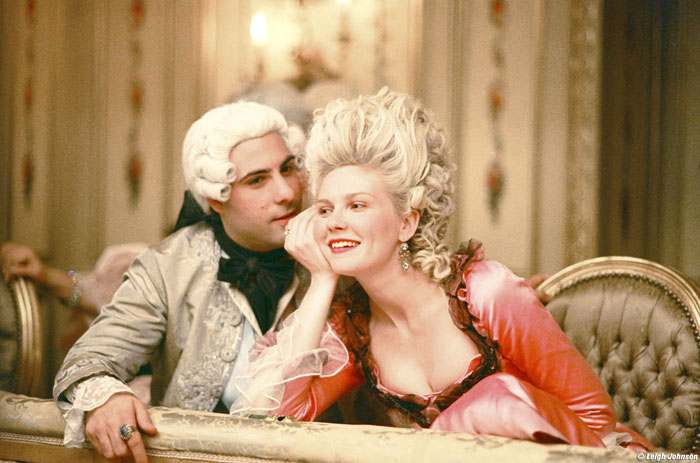 In a bid to assure Austrian might within Europe, Empress Maria Teresa (Marianne Faithfull) plotted many politically savvy marriages for her daughters. The most impressive alliance was made in 1769, when her fourteen year old girl was engaged to the son of France's King Louis XV. The teenager walked into the minefield of maneuvering and straightjacket of formality that was Versailles and found herself married to a sexually uninterested husband who would not secure her place at court by consummating their marriage for seven long years, three years after he had become King Louis XVI. His embattled queen was "Marie Antoinette."

Writer/director Sofia Coppola's modern imagining of the 18th century French court is a pop tart confection, an elaborate wedding cake of a movie floating on the airs of the 1980's New Romantic movement. "Marie Antoinette" is like a girlified version of a Ken Russell ("Gothic," "Litzomania") period piece. There is no mistaking Coppola's intent right from her introductory 'Never Mind the Bullocks' styled titles. Jumping off from Antonia Fraser's recent biography of the monarch, Coppola mixes historical fact with Coppola's own perspective on what this young woman had to contend with. Rather than the imperious 'Let them eat cake' of legend (the comment was never made by Antoinette), we get a young girl who was bored at court, stressed by the demands of producing an heir, then suddenly thrust into a role neither she nor her husband was prepared to handle. The sheltered life at Versailles made Marie and Louis puppets of their advisors, yet Marie was bold enough to engage her 'artistic' side, surrounding herself with the artists of the day (and a Swedish lover) at Petit Trianon and loosening the mores of the court. She was a style setter who took the powdered Belle Poule hairstyle to new heights, then introduced a looser, less restrictive form of dress. In the end, Coppola's Marie was guilty of a shielded, rarified life, but was not uncaring and even exhibited dignity. The director returns to the star of her first film, "The Virgin Suicides," for her Marie and Kirsten Dunst returns the many faces Coppola has supplied for her. It's a performance that is light and airy while still registering the pressures faced by her character. Dunst is girlish, even airheaded when she protests the loss of her dog (Marie had to abandon every shred of her Viennese possessions when she crossed the border into France), but has gradually acquired maturity by the time she must respond to the revolution at her door. Jason Schwartzman ('I Heart Huckabees') is very funny as Louis XVI, playing the monarch as an insecure nerd and Judy Davis's Comtesse de Noailles epitomizes the ridiculous degree to which Versailles has been formalized (she hovers over Antoinette's toilet, supervising the rank of which attendant may hand the shivering, young woman her articles of clothing). Also good are the boisterous Rip Torn ("Dodgeball: A True Underdog Story," HBO's "The Larry Sanders Show") as Louis XV and Asia Argento ("George A. Romero's Land of the Dead") as his uncouth mistress Madame du Barry. The remainder of the court is comprised by equally unusual casting choices, some of which work (Danny Huston, "The Constant Gardener," as Emperor Joseph, Marie's brother) and others which are more suspect (British comic Steve Coogan as the Austrian ambassador to France? SNL's Molly Shannon as a French royal?). The film is stunning to look at, with its unprecedented access to real Versailles locations, glorious costuming (Milena Canonero, "The Life Aquatic with Steve Zissou," a sure Oscar contender) and painstaking hair and makeup. Art and set direction (Anne Seibel and Véronique Melery) are incredibly detailed and support Coppola's teenage pastel vision. Music supervisor Brian Reitzell has pulled together a boffo soundtrack mixing 18th century music with Adam and the Ants and New Order. Coppola sets an elaborate costume ball to Siouxsie and the Banshees' 'Hong Kong Garden,' the coronation of Louis XVI to the majestic opening strains of the Cure's 'Plainsong' and a 'shopping' montage to Bow Wow Wow's 'I Want Candy.' And it all works brilliantly. Coppola's film is full of life, often funny (watch for her exaggerated, 'Fabio' romance novel stance that Marie casts her lover in in her imagination) and quite witty. This "Marie Antoinette" proves that there is always more than one way to tell a story.

Sofia Coppola, dubbed a wunderkind for her overly praised Oscar-winner “Lost in Translation,” really shows her filmmaking mettle with her adaptation of Antonia Fraser’s book, Marie Antoinette: A Journey. Starring a completely underrated Kirsten Dunst as the title character, Coppola stylishly captures the innocence and naivety of the child princess who married King Louis XVI (Jason Schwartzman) of France. The DVD edition of “Marie Antoinette” is now in release and, while the extras are sparse and hardly a treat, the film itself is well worth seeing for the first time or for repeated viewings. The DVD release of “Marie Antoinette” contains, of course, the 123-minute version (not a director’s cut) of the film. Coppola and company create a look into the world of late-18th Century French royalty, the debauchery, hedonism and excess of their lives through the eyes of the young Austrian princess, Marie. While Antoinette has, historically, been viewed as a selfish, demanding royal who is said to have made the thoughtless statement, when told the people of France have no bread, “Let them eat cake!” – Coppola and author Fraser set the record straight. Marie Antoinette may have been a pampered child queen but she did care, in her way, for the people of France. Marie Antoinette,” the movie, is a worthwhile film and deserves to be seen on the small (well, today, not-so-small) home screen. Unfortunately, the extras provided on the DVD are few and uneven. The best of the special features is the “Making of” featurette which does a decent job bringing us behind the scenes of a film that has, as its location, the actual palace of Versailles. It also features costuming and production design challenges in recreating the world around King Louis XVI. The other add-ons to the DVD include a piece titled Cribs with Louis XVI” with Jason Schwartzman, in costume, giving a tour of Versailles for MTV. Where this bit could have been both informative and stylish, it is, instead, little more than a talking music video with erratic camera work using way to many close-ups of Schwartzman being “cool” with his “Yo, yo!” slang and faux hip descriptions. Little of Louis’s “crib” is given any shrift and this extra should have been dispensed with. The only other additions to the DVD are several scenes deleted from the final product. Missing from the special features is a commentary of the film by its director. But, if you have ever heard Sofia talk, you can see why the DVD makers omitted this from the package. But, a commentary by the book’s author about the film may have been enlightening.