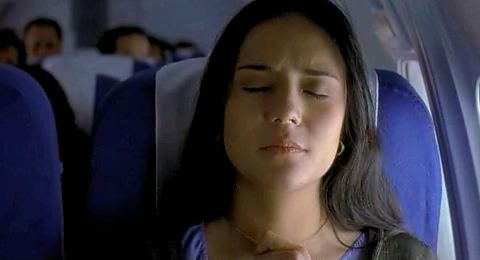 17-year old Maria (Catalina Sandino Moreno) ekes out a painful living in her native Colombia stripping thorns off of roses for export to wealthier countries. It’s a dead end for the young woman until she is presented with a golden opportunity to get out of her rut: become a drug mule. She just has to ingest pellets of pure heroin, fly to America and turn over the cargo. It sounds simple enough but her choice begins a most harrowing week for “Maria Full of Grace.”

In a small Columbian town, Maria (Berlin Film Festival Best Actress winner Catalina Sandino Moreno) is feeling put upon by an uncaring boss at a rose processing plant and the mother and sister who depend on her paycheck. In a bid for freedom, Maria decides to go for the quick money tied to muling heroin to the U.S. Her secret pregnancy gives Maria the courage to get through the horrific experience and endows her "Maria Full of Grace." Writer/director Joshua Marston makes an impressive debut with his brutal tale of one woman's walking through fire to attain a new life. The film socks a one two punch with the breakthrough performance of lead actress Sandino Moreno, who invests Maria with bold spirit and righteousness, and its harrowing and tense midsection which succeeds on the strength of its actresses and Marston's detailed accounting of drug muling. Maria does not have a problem standing up for herself. When her supervisor is more concerned about her productivity than her morning sickness, she quits her job in her hometown's only industry. When she tells her boyfriend Juan that she is pregnant, she rejects his offer of marriage as both impractical and undesirable. She remains cool with Bogota drug lord Javier, who acts almost soothingly through her initiation process before informing her that failure to deliver will bring harm to her family. During her first plane trip, Maria is unsettled from both the experience of flight and the extreme discomfort caused by the sixty pellets of heroin in her stomach (the mechanics of ingesting and re-ingesting and then eliminating the drugs is gut-churning). She is also surprised to see the flight peppered with at least two other carriers known to her. Lucy (Guilied Lopez) is the experienced mule who taught Maria how to prepare for her interview with Javier by practicing swallowing large grapes whole and Blanca (Yenny Paola Vega) is her friend from the rose plantation who has now become an unwelcome follower. Lucy looks deathly ill and Blanca is doing everything Lucy warned Maria against. The baby Maria is carrying proves to be her salvation. Although she is stopped by customs officers, she cannot be x-rayed (it is unexplained how the far less convincing Blanca passes through). The U.S. end of the operation turns out to be far more brutal, causing Maria to flee and find her own way in the streets of New York, where she is introduced to Columbian immigrant culture. The film ends in an expected but nonetheless satisfying way. Catalina Sandino Moreno creates a strong young woman whose external fearlessness is cut with just the right amount of vulnerability to keep her real. Hers is a confident performance which shows a maturity unusual in a debut. Three other actresses all deserve mention, however, for their representations of the world Maria moves through. Yenny Paola Vega is perfect as Blanca, an unremarkable girl who shines in Maria's reflected light, then becomes a sullen burden when following Maria brings trouble. Guilied Lopez gives Lucy a veneer of city girl sophistication before stripping it away to the innocent beneath. Patricia Rae ("Swimfan") portrays Lucy's older sister as warily maternal to the two troubled girls, a foundation of familiarity amidst scary chaos. Joshua Marston's writing and direction pulls the viewer into the three distinctly different lifestyles Maria experiences. We feel the downtrodden acceptance and boredom of those born into poverty and the hope and hardships of a new life in the United States. Marston's centerpiece, though, is one of the most gripping explorations of the drug trade ever put to screen. "Maria Full of Grace" is unforgettable.

First time writer/director Joshua Marston has created a unique and original story on a subject that has not really seen the light of day. Sure, the subject of smuggling drugs has been with us for ages – think “Midnight Express,” for example – but I can’t remember a film that dealt with the drug smugglers’ “mules,” those poor unfortunate dupes who risk their lives and freedom for the few dollars their smuggling effort will bring. Maria is an intelligent teenager who is frustrated with her going nowhere life. She busses the long distance to the flower “factory” every day, constantly bandaging her fingers from the cuts made when she strips thorns off of roses. Her foreman is an uncaring martinet concerned only with filling his quotas and not the about the workers. Her family, with no man in the household, struggles to make ends meet, especially with her sister and sickly baby to be cared for. Maria is also being pressured by her boyfriend, whom she doesn’t love, to marry. And, she is pregnant. All of these demands take their toll on the young woman and, one day, she ups and quits her job. The hue and cry from her mother, grandmother and sister force Maria to find work – any work. When handsome, friendly Franklin (John Alex Toro) suggests that she become a mule – assuring her that only those wishing to be “famous” get caught smuggling – she agrees. This decision propels Maria into an alien world where she learns that she will have to swallow “pellets” of pure heroine - over 60 at 10 grams apiece (over a pound) – board a plane, fly to New York and deliver her illicit cargo. One experienced mule, Lucy (Guilied Lopez), mentors Maria in the process and the young women heads to New York with a belly full of dope. This begins a journey, both physical and emotional, for Maria that involves an arduous plane ride, suspicious US Customs officials and a pair of very unsavory drug dealers. Maria’s experience in the big city, especially after having her baby checked with a sonogram, will bring enormous change to the young woman and her future. Joshua Marston shows a deft hand, both with his writing and his behind the camera control, that belies his first-timer status. Of course, it helps that his star, Catalina Sandino Moreno, has palpable charismatic appeal and does a fine job portraying Maria’s rebelliousness, cool head, vulnerability, kindness and compassion. Hers is a three-dimensional character and Moreno’s performance is a calling card debut. Supporting cast, especially Lopez, does a good job filling in the background. “Maria Full of Grace” is a disturbing movie that puts you right up there with the title character as she tries to brave her way through a dangerous, even deadly, mission that could set her for life. Or, kill her. The ability of young newcomer Moreno, combined with the new talents of Marstow, make this a film worth watching. At the very least, it made me give up my career ambitions to become a Colombian drug mule.