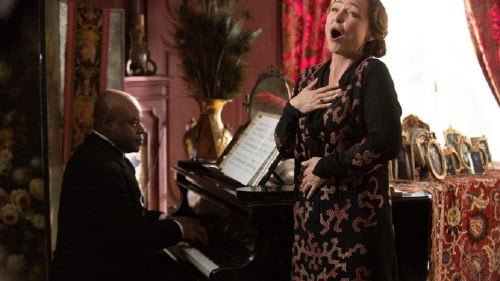 "Marguerite" is the first of two movies coming out this year in the U.S. on Florence Foster Jenkins, a New York socialite whose abysmal operatic singing provided ironic entertainment. Meryl Streep will star in Stephen Frears' biopic later this year, while Xavier Giannoli's film transports the singer to France and renames her. Catherine Frot won a Cesar for this role and she's very sympathetic, a woman looking for the love she doesn't receive at home through the audiences she believes adore her. She's buffeted by many supporting players, each with their own agenda, her butler her staunchest protector. Frot convinces as a woman who truly believes in her talent and despite her delusions, is so lovable, few would wish to burst her bubble. Giannoli achieves just the right mix of comedy and tragedy, one just wishes he'd been a bit more succinct. (You can listen to recordings of the real Florence Foster Jenkins on Youtube.) Grade: