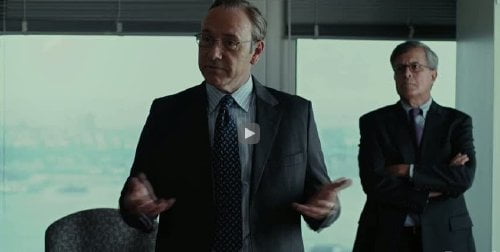 In 2008, the framework of America’s financial industry fell apart, resulting in an economic crisis only surpassed by the Crash of 1929. An unnamed brokerage firm is in the midst of massive layoffs, including mid-level executive analyst Eric Dale (Stanley Tucci) who was working on a spreadsheet that indicates that the company is on the fiscal edge because of bad speculation. When the top executives of the company learn of their precarious situation it is time to make the “Margin Call.”

Writer/director J.C. Chandor makes his feature debut with a low budget look at an unnamed (Goldman Sachs) high flying investment firm on that day in 2008 before the bottom fell out. It's an actors' showcase not unlike "Glengarry Glen Ross" where the mettle of a man is found in his ethics and ruthlessness, or lack thereof. The film was championed and produced by its young star Zachary Quinto ("Star Trek"), who plays a young risk analyst who is passed a thumb drive with the words 'be careful' by his fired boss, Eric Dale (Stanley Tucci) as he's escorted out the door. At the end of his workday, Peter completes his boss's project and is astonished by what he finds - that the firm is holding so many worthless mortgage-backed securities that the company has completely lost its value. The troops are called in throughout the night. Peter calls his workmate (Penn Badgley, amusingly obsessing about money throughout) and tells him to get himself and their new boss Will Emerson (Paul Bettany, "A Beautiful Mind," "Masters and Commanders"), back to the office stat. Will calls his boss, Sam Rogers (Kevin Spacey in a quiet performance, beautifully cast against type), who is grieving over his dog's last day (a rather obvious metaphor, but Will's sorrow works) and cannot believe he's being called at 11:15 p.m. From there its time to alert the big guns - Mary Rogers (Demi Moore), whom Eric confronted on his way out, and Jared Cohen (Simon Baker, TV's 'The Mentalist'), who demands the return of Eric Dane. With all around a conference table at 2 a.m., in walks John (Jeremy Irons), the Master of their Universe. John demands that there is nothing else to be done but to sell as quickly as possible before words gets out on the street. The survival of his firm is the utmost goal, even if it means economic collapse on Wall St. Will is being asked to boost his team's morale while admitting that everything they've worked for has been shameful. The film's very well acted, the players in the middle being the ones whose ethics bring the most to bear. Spacey is alternately morally grounded and cynical while Bettany's seeming cynicism is surface gloss. The film is a good fictional counterpart to documentaries like "Inside Job," a tale of greed that is meant to outrage and very timely as Wall St. is being occupied. And yet, the film's lack of budget hurts it. The office floor in which the action takes place is too shabby and dull an environment. The film's sound often seems to lack ambient sound, as if recorded in a vacuum. Still, this is a neat little morality play about the few whose actions caused the collapse of millions.

First time feature filmmaker, writer-director J.C. Chandor, has an all-star cast at his disposal to tell his version of events that sparked the economic disaster of 2008. The story does not burden the viewer with a lot of techno mumbo-gumbo explaining why those who should have known better, the leaders of the giant financial institutions, did not. You get a sense of why there is a crisis but “Margin Call” focuses mainly on the characters that naively sparked the new depression. While the likes of corporate president John Tuld (Jeremy Irons) and his senior staff “run” the company, it is men like Eric Dale and savvy analyst Peter Sullivan (Zachary Quinto) who understand the complex workings of brokering biz. The film show a disjoint between the mid-level workers and their knowledge of the market and the upper levels that are only interest in profits, no matter the consequence. It shows the house-of-cards that companies like Goldman Sachs, Lehman Brothers and Bear Sterns built and their mismanagement has affected people around the world. Along with Irons, Tucci and Quinto, “Margin Call” stars Kevin Spacey, Paul Bettany, Simon Baker, Demi Moore and other veterans whose names are more of a draw than the characters they portray. Do not expect mayhem, shootouts or high speed chases but do expect a corporate thriller that shows how our lives have been impacted by the inmates running our financial institutions.