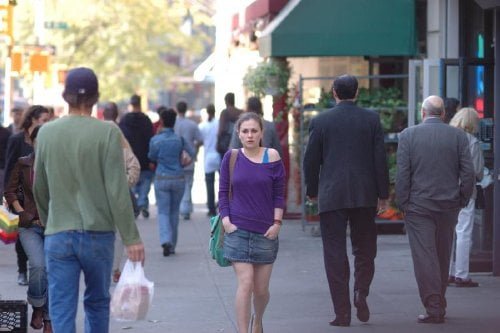 'Margaret, are you grieving Over Goldengrove unleaving? Leaves, like the things of man, you With your fresh thoughts care for, can you? Ah! as the heart grows older It will come to such sights colder'

Lisa Cohen (Anna Paquin, HBO's 'True Blood') is the privileged teenaged daughter of a NYC actress living on the Upper West Side. One day, her attempt to purchase a cowboy hat turns into a flirtation with a bus driver whose distraction causes the violent death of Monica Patterson (Allison Janney, TV's 'The West Wing,' "The Help"), who dies bloodily in Lisa's arms. The young girl's guilt over the woman's death and her panicked cover for Maretti (Mark Ruffalo, "You Can Count on Me," "The Kids Are Alright"), the driver, cause her to rail against all her perceived injustices in a post 9/11 world in "Margaret." Writer/director Kenneth Lonergan's troubled sophomore followup to 2000's indie smash "You Can Count On Me" was shot in 2005 (watch for a theater marquee featuring "Roll Bounce," Flight Plan" and "Serenity"), then held up by his reluctance to leave the editing room, where his three hour cut didn't satisfy his distribution contract, and the multiple law suits which followed. Now Fox Searchlight is putting out a 2.5 hour cut with little fanfare and that's a shame. "Margaret" is a work of great psychological understanding and one of the most artistically satisfying reactions to 9/11 put to film. It's hard to know whether to attribute its third act choppy shrillness to the prolonged editing process, but this version only whets the appetite for Lonergan's longer work. The poem from which the film gets its title, Gerald Manley Hopkins "Spring and Fall," is about an older man telling a young girl that her sadness at the turning of the leaves in autumn is actually her first recognition of mortality and that it is really herself that she is mourning for. Lisa's dramatic and tortured reaction to the death of a stranger and her inability to make the 'right' things happen in its aftermath is not only an insightful look into the mind of a teenager on the cusp of adulthood, but a metaphor for the loss of innocence and helplessness the city experienced years earlier. Lonergan carefully weaves multiple tendrils of Lisa's life into his theme. Her school days at Ralph Waldo Emerson High are often spent stridently defending her post 9/11 point of view against the statements of Angie (Hina Abdullah), an Arab student. Her once girlfriendy relationship with her successful mom Joan (Lonergan's wife J. Smith-Cameron, "You Can Count on Me") becomes combative. She embraces the idea of living with her west coast dad (Lonergan) but rejects the ranching vacation which was the catalyst for buying that hat. Her burgeoning sexuality becomes part of the confusion as she keeps the boy who really cares for her, Darren (John Gallagher Jr., "Pieces of April," "Whatever Works"), on the burner but offers herself to attached 'bad' boy Paul (Kieran Culkin, "Igby Goes Down") and the well-loved Midwestern teacher, Mr. Aaron (Matt Damon), who's tried to help her despite her verbal lashings. She confronts Maretti at his home and is astonished when she gets more understanding from his suspicious wife (Rosemarie DeWitt, SHOtime's "The United States of Tara," "Rachel Getting Married"). She hounds the detective on the case and finds Emily (Jeannie Berlin, 1972's "The Heartbreak Kid"), the victim's good friend (it's never clear whether a partner), to help with her crusade for justice (the use of the word 'strident' earlier was intentional as it comes into play with Emily, the only person to eventually call Lisa out). There's a lot going on here and Lonergan doesn't short shrift any of it until bumpy passages near film's end. He even debates his own theme, allowing us to see how ludicrous a student's argument that teenagers' uncorrupted idealism makes them the ideal world leaders, then having a student intelligently counterpoint accepted Shakespearean analysis against his teacher's (Lonergan's old Upper West Side high school buddy Matthew Broderick) weakening arguments. In parallel to Lisa's odyssey, we also see her mother Joan tentatively embarking on a new relationship for the first time in years. Ramon (Jean Reno, "The Professional," "Couples Retreat") is a South American with a love of the arts, especially opera. The American vs. foreign viewpoint is a sharply felt as the idealistic teenager vs. compromised adult, most sharply illustrated by Joan's reaction to the opera crowd, and her subplot's wrap is in thoughtful, understated yet surprising contrast to Lisa's launch. Lonergan's screenplay is so intelligent, so finely layered and true to human nature but although his ensemble cast expresses his vision almost perfectly, Paquin's late scenes often end on a shrill note which become an unpleasant harangue. Then again, Lisa isn't necessarily meant to be likable. Still, by the final mother and daughter scene at the Met, everything's come empathetically full circle. The film celebrates New York unlike any since the last Woody Allen to grace its streets and its tone is complemented by Nico Muhly's ("The Reader") vaguely Eastern European sounding score. Ryszard Lenczewski's camera spotlights the individual within New York's crowds while still drawing one to the faces of strangers. Performances, including Joan's fictional one and two operas (featuring sopranos Christine Goerke and Renée Fleming and mezzo Susan Graham) are all shot from unique angles which bring us onto the stage. This cut of "Margaret" is a flawed masterpiece. Maybe Lonergan's three hour cut is as well, but it is an additional three hours I'd gladly devote to finding out.