Marcel the Shell With Shoes On 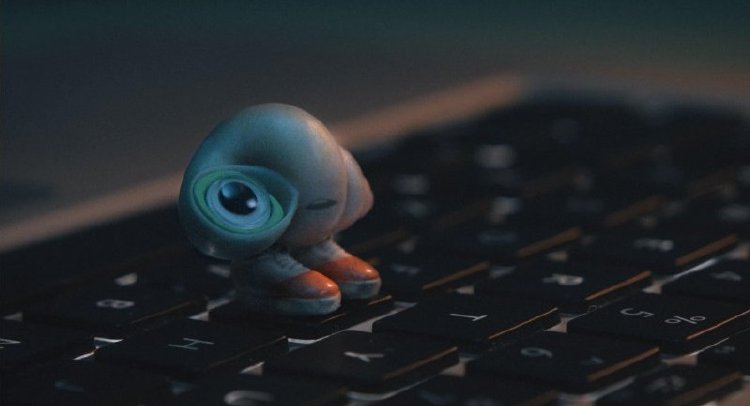 When independent filmmaker Dean (Dean Fleischer Camp) checks into an Airbnb after separating from his wife, he certainly isn’t expecting to find the subject of his next work, one who will become so popular on the Internet he will become the subject of his favorite TV show, ’60 Minutes.’  Everybody loves “Marcel the Shell With Shoes On.”

Back in 2010, Marcel (voice of Jenny Slate) made his first appearance on YouTube, the combined inspiration of Slate, who came up with the voice and improvises his dialogue, and her husband Dean Fleischer Camp, who actually created the character with about $6 worth of material.  The couple has since divorced, a fact folded into the plot of their beloved character’s feature film debut (you can catch photos of the couple sprinkled throughout the film).

Those familiar with Marcel will already know that he frequently muffs up his introduction and, having always longed for a dog, has satisfied himself by dragging a piece of lint named Alan around on a string.  Faced with the reality of Dean’s dog, Marcel will note that he can ‘smell his face.’  But given a bigger canvas, we now learn Marcel lives with his grandmother, Nana Connie (voice of Isabella Rossellini) and that they both used to reside with a much larger community of friends and family who hid in a sock drawer and ended up being thrown into a suitcase and driven away.  Marcel takes very special care of Connie, whose memory is beginning to fail, but who is still an avid gardener who makes friends with bees and earthworms which unsettle Marcel.

The combination of Dean’s stop motion animation/live action hybrid (and his own amused, off camera reactions to Marcel) with Slate’s endearingly high pitched, fragile vocals and innocent, often moving wisdom is artistic collaboration at its finest.  This little shell with its expressive eyeball and pink shoes looks at the world with something like a child’s eyes combined with adult empathy, frequently saying ‘the darnedest things.’  Marcel’s remembrance of Mrs. Kim alone is worth the price of admission, a single sentence that would have had me blowing milk out of my nose had I been drinking any at the time.  Dean’s muffled laughter hearing Marcel’s revelation of where he found his rope seems like the real deal, the filmmaker reacting to his ex-wife’s ad lib in real time.  These two depict carsickness hilariously without turning it into gross out humor.

Lesley Stahl is a game sport, showing up with her real production field team, but after Slate, the film’s MVP is Rossellini, her accent explained because she ‘came from the garage in a coat pocket,’ her reading of the Philip Larkin poem ‘The Trees’ not only thematically resonant, but as moving as Marcel’s small warbling singing voice.  Production Designer Liz Toonkel creates a fairly tale environment, the Airbnb all soft pastels, Marcel’s world all dollhouse aesthetic, common objects given new identity (honey – who knew?). Disasterpeace’s ("Under the Silver Lake") piano score gently cradles the proceedings.

Slate, Camp and their cowriter Nick Paley have expanded Marcel’s world ever so slightly, yet express so much about family, grief, filmmaking and celebrity.  Marcel makes the world a better place.