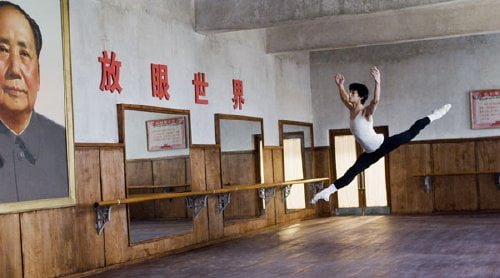 When just 11 years old, young Li Cunxin was taken from his rural village and sent to Beijing to study ballet as part of China’s Cultural Revolution. In 1979, as a member of an arts exchange program, he journeyed to Texas, met and fell in love with an American dancer. Two years later he defected to the US as “Mao’s Last Dancer.”

At the age of eleven, when three officials from Beijing visit a rural school, they don't find a student to their liking, but the young teacher points out Li Cunxin. He's taken to a local city where he turns out to be one in almost literally a million chosen to study at Madame Mao's Royal Beijing Dance Academy. Nine years later, once again he's not the first choice when officials think of whom to send as a temporary guest of the Houston Ballet, but an unlikely ally, Teacher Gao (Gang Jiao), notes his perseverance. Leaving his family behind for the second time, Li finds that the U.S. is not at all what he's been taught it would be and he must choose to perhaps never see them again if he is to stay as "Mao's Last Dancer." Director Bruce Beresford, who hasn't had a theatrical release since 2002's "Evelyn," has taken an incredible human story (adapted by Jan Sardi, "The Notebook," from Cunxin's autobiography) and turned it into a stodgy telefilm periodically elevated by some incredible dance and a pitch perfect performance from Bruce Greenwood ("Dinner for Schmucks") as the Houston ballet's choreographer Ben Stevenson. Well past the film's midpoint, when immigration lawyer Charles Foster (Kyle MacLachlan, HBO's "Sex and the City") arrives to escort Li from the Chinese Embassy after his defection, we see an overhead shot of Foster's car encased by the media and it is jarring because it is the first time the camera has been moved somewhere interesting. In fact, it almost seems like a second filmmaking team took over the picture as the third act plays a lot more professionally than the first two. Most films about the ballet suffer from stilted acting because in order for the dance to be convincing, ballet dancers must be cast and "Mao's Last Dancer" is no exception. Birmingham Royal Ballet principal dancer Chi Cao had two weeks of acting lessons before taking on the adult Chi and while he grows into the role he is far more effective on the stage. Supporting players like Hawaiian ballerina Amanda Schull ("Center Stage") and Australian ballerina Camilla Vergotis are even less convincing. Still, we have that anchoring Greenwood performance (he moves like a dancer) and Joan Chen in a small but seminal role as Chi's mother. "Mao's Last Dancer" is a story well worth telling - in a funny way it's like "Farewell My Concubine" crossed with "The Year of the Yao" - but despite some really incredible dance, Li's bestselling book may be preferable to Beresford's screen adaptation.

Bruce Beresford has been idle from directing for several years (his last film was the 2006 direct-to-DVD “The Contract,” of which I know nothing). The long time away from behind the camera shows in “Mao’s Last Dancer,” a stodgy biography that lacks spirit and emotion. Based on the autobiography by Li Cunxin, the film, in non-linear fashion, flashing back and forth between its present (circa 1980) and the past, tells the story of the rise of a great dancer amidst the political frictions of the time. Unfortunately, what could have been a good, interesting film is, in a word, tedious. At almost two-hours and with nowhere near enough dancing – the dance, by Chi Cao, principal performer for the Birmingham Royal Ballet, IS spectacular – making for a clock watcher of a film. Even though the Li Cunxin character is the focus of the film, Bruce Greenwood steals the show every time on screen as Ben Stevenson, the chorographer of the Houston Ballet and mentor to Li. Chi Cao shows his acting inexperience as Li Cunxin and is wooden, at best, when not dancing. The rest of the cast is notable in not being notable. Unless you absolutely love films about dance, then you may want to give “Mao’s Last Dancer” a pass.