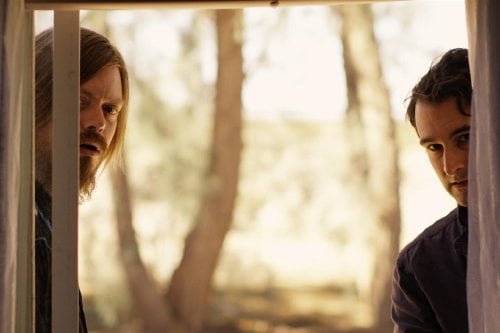 Brothers Nick (Jay Duplass) and Conrad (Linas Phillips) have drifted apart over the years. Nick is a devoted family man, while Conrad has spent his time obsessing with all things about death. The brothers’ lives intersect once again when Conrad shows up on his brother’s doorstep. The reason for this impromptu visit: Conrad wants to make amends and Nick agrees to join him on a “Manson Family Vacation.”

When he's informed by his legal secretary that 'Pat McGroin' called, Nick (producer Jay Duplass, "Paper Towns") isn't thrilled, realizing his estranged brother is coming for a visit. Nick's already at wits end with nonstop work and his son Max's (Adam Chernick, "The Angriest Man in Brooklyn") behavioral issues, which he deems sociopathic. When Conrad (Linas Phillips, looking like Nick Offerman's demented younger brother) makes his idiosyncratic arrival, Nick's sufficiently moved by Connie's wish to bond to agree to take the day off to 'do something together,' never dreaming he's about to go off on a "Manson Family Vacation." The Duplass brothers have been busy, not only with their own filmmaking projects, but producing works by new young talents like Patrick Brice, who worked with Mark on "Creep" before going on to make "The Overnight." Now they present us with writer/director J. Davis, who worked on Jay's documentary "Kevin" before casting him as the colead in his first feature, one which takes a simple premise about brotherly bonding and places it in a surprising framework. The Manson subtext not only gives the film a darkly comic bent, but deepens its emotional context. This little film is both familiar yet not, marking the debut of a unique voice. When he gets home, Nick pulls the old 'display the despised wedding gift' trick, hanging Conrad's painting, which pictures a family with a demonic looking child, over the mantle. He tells his wife that Conrad was always drawn to things like "Faces of Death," Death Metal and the 9/11 attacks, tastes which now disturb him in his own son. We're clued in that Nick's perspective on things may need adjusting by Amanda's (Leonora Pitts, "The Freebie") response, which is much more empathetic to Conrad's behavior. Nick still resents that Conrad made no appearance at their father's funeral. When Max approaches his uncle the next morning, he's curious about Connie's Helter Skelter book. Connie tries to feint, but ends up giving the kid some generic information, also informing him (and us) that he was adopted, but when Nick was born two years later, he was shunted aside. When Nick enters the room, Max announces he's seen 'cool pictures of dead people' giving Nick another reason to be furious. The two take off, first stop the Sharon Tate house (which was at 10050 Cielo Drive, not 5357 as seen in the film). Conrad's downright giddy, describing the events punctuated with borderline hysterical giggles. Nick's uncomfortable and antsy, so Conrad offers to take him to lunch, only to reveal that they're sitting in the same booth at El Coyote where Sharon Tate and her guests ate the night they were murdered. But there's a shift, Nick beginning to realize the age old hurts that haunt his brother. By the time they get to the LaBianca house, Nick is colluding, telling the owner (Suzanne Ford, "You, Me and Dupree") they are the grandchildren of the slain couple to gain entrance, then coming up with another ruse to get Connie in the kitchen (where he snaps Polaroid selfies in front of the fridge). The newfound camaraderie doesn't last, though, and Nick throws Connie out, but when Amanda insists he drive his brother to his new environmental job, Nick's thrown into an adventure he never foresaw. One of the interesting things about "Manson Family Vacation" is that while both Duplass and Phillips make their characters so uncomfortable (in thoroughly different ways) to be around, that when they team up, we actually root for them. By the time Conrad falls in with Blackbird (Tobin Bell, "Saw") and Sunshine (Davie-Blue) out in the desert, Duplass makes us feel his increasing panic at just where his brother might be heading while Davis accentuates that it is now Nick who is the outsider. The two actors enjoy a genuinely cathartic declaration of love for one another that ends the movie on an exhilarating note. Davis, who uses archival Manson interviews to comment on his fictional action, has found a great one to wrap, one which cements his themes of death, fathers and sons. Grade: