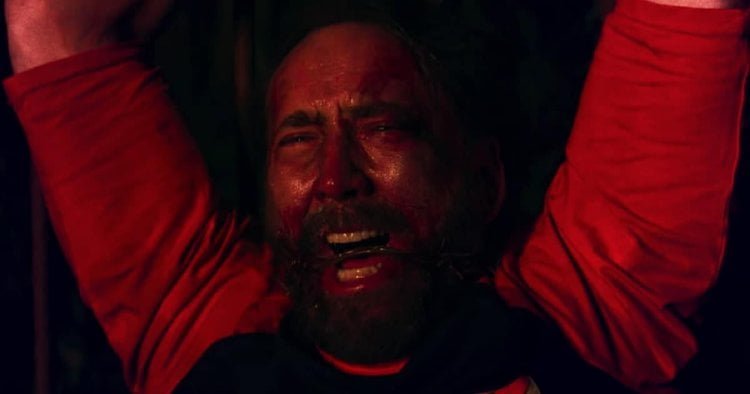 In 1983, logger Red Miller (Nicolas Cage) lives peacefully with the love of his life (Andrea Riseborough) by a lake in the Pacific Northwest. His world will become hell on earth when LSD-addled Mansonesque cult leader Jeremiah Sands (Linus Roache) spies Red's girlfriend on the side of the road and decides he must have "Mandy."

Cowriter (with Aaron Stewart-Ahn)/director Panos Cosmatos' ("Beyond the Black Rainbow") drug-fueled revenge flick is a heavy metal giallo with imagery seemingly inspired by a custom van mural painted by Frank Frazetta and a Nicolas Cage performance for the ages. This witchy, satanic throwback to the 80's trumps most actual horror movies of the era with its genuine sense of dread, real emotion, drug induced visuals and painstaking craft. "Mandy" is a cult film with serious chops. After Jeremiah's vanful of followers drives by Mandy, Mother Marlene (Olwen Fouéré) shows up at in her shop, engaging her while purchasing a green apple. Having learned of her lakeside home, Jeremiah instructs Brother Swan (Ned Dennehy) to fetch her. Swan goes out into the forest and blows into a stone instrument, summoning the demonic Skratch, Sis and Scabs on their ATVs. The trio break into the sleeping couple's home and take Mandy. Back at Jeremiah's lair Mother Marlene and Sister Lucy (Line Pillet) prepare Mandy with eye drops and insect venom, setting her off on an acid trip. Jeremiah asks her what she sees. 'I see the reaper fast approaching.' He asks if she 'likes the Carpenters,' then tells her he has something better and puts on a record of his cult's own making. As voices sing his praises, he presents himself to her, but Mandy laughs at him. Jeremiah's response is brutal and it is witnessed by Red, bound in barbed wire. Abandoned, Red extricates himself and mourns over what is left of his love, a skull and smoking cinders, then returns to their home for a scene of raging despondence that must be seen to be believed. Not only is Cage bloodied, disheveled and in his underwear, but he's been placed in a notable setting, a meticulously art directed bathroom of orange and yellow and dark woods. Grabbing a double bottle of vodka from beneath the bathroom sink, Cage howls, drowning himself and his wounds in booze. This is something beyond the bonkers performances we've seen from Cage in films like "Mom and Dad," a primal scream of grief. Wandering into the living room, he stands catatonic in front of the TV playing a commercial for 'Cheddar Goblin' mac 'n cheese, a mini Cosmatos marvel perverting the every day. Arming himself with a crossbow which he calls 'the reaper,' Red makes his way to Caruthers's (Bill Duke) trailer for information and hears of bad things attributed to a biker gang called the Black Skulls and a group of LSD peddling hippies who haven't been the same since a 'special batch' was made for them. Duke's exposition over, Red sets off on their trail picking up a series of weapons (a box cutter, halberd and chainsaw) and juicing himself with a pile of coke and mysterious, mind-melting substance along the way. So, go for the promise of a singular Nicolas Cage performance and be rewarded with so much more. Linus Roache is also outstanding as the charismatic leader with feet of clay, eerie and weird, masculine yet feminine. Fouéré is notable as his jealous partner. Andrea Riseborough's Mandy is enigmatic, a woman with an almost supernatural presence who foretells her own death in a childhood tale of baby starlings (Cage's totem is a tiger and Red meets one in the flesh). But above all, "Mandy" is the work of a man with a vision. Cosmatos' 'simple' revenge tale is anything but, loaded with portents, symbols and references. He has great command over his cast, Mandy's fiery death used to define Jeremiah's cult with by their reactions (one licks his lips, another points a finger gun while Lucy quietly expresses sisterhood and Marlene celebrates the eradication of a rival). The filmmakers' dialogue alternates between 80's cheese, passionate incantations ('I anticipate my lover's every move...') and Cage classics ('You're a vicious snowflake!'). Cinematographer Benjamin Loeb piles on the filters, the film drenched in red and fuschia. A melding of Jeremiah and Mandy's faces is extremely unsettling, she, apparently, never quite leaving him. An oppressive electronic score is one of Jóhann Jóhannsson's ("Sicario") last (the composer died earlier this year). Be warned, the movie is also drenched in gore, although its effects are vintage drive-in. There are so many influences here, from "The Devil's Rain" to Hammer and British folk horrors, yet "Mandy" stands on its own, a dark, despairing horror. Grade:

A young woman (Andrea Riseborough) walks down a deserted country road at night and, from a passing van, is seen by the leader of an evil cult. Soon, they abduct the woman, with the help of a demonic motorcycle gang, with not very nice intent. This sets her battered boyfriend, Red (Nicolas Cage), on a path of vengeance in his search for “Mandy.” Sophomore writer-director Panos Cosmatos creates a funky revenge vehicle for Nicolas Cage to drive around in with his story of the brutal cult, led by the charismatic Jeremiah (Linus Roache), who kidnaps Mandy, brutalizing Red in the process. Then, comes his revenge. I have always had an affectionate spot for Nicolas Cage. He has been brilliant and awarded for it (“Leaving Las Vegas (1995)” earned him an Oscar) but also did a lot of for-the-money projects to pay his bills. Still, I have always enjoyed watching him even when not so much the movie. “Mandy” is a flick for horror fans and I am not really a horror fan. But, it is fun to watch Nic Cage chew scenery in his blood-covered persona as he does battle, wielding his hand-forged axe and crossbow, with the murderous forces of evil. But, that is about all that “Mandy” held in store for me.