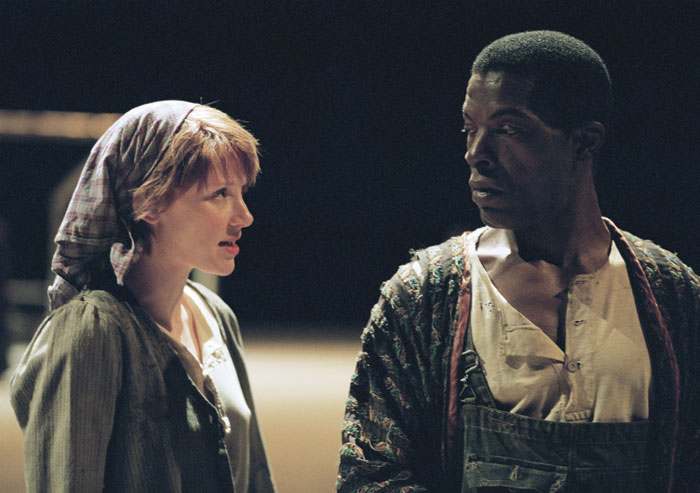 After fleeing the duplicitous town of Dogville, Grace (Bryce Dallas Howard, "The Village," taking over the role from Nicole Kidman) accompanies her father (Willem Dafoe, "Spider-Man 2," "The Life Aquatic with Steve Zissou," taking over the role from James Caan) and his gangsters as they travel into the Southern states, but her idealistic nature once again causes a rift when Grace intrudes upon the beating of a slave at the cotton plantation named "Manderlay."

Writer/director Lars von Trier began his incendiary America trilogy with the vivid and controversial "Dogville," but his second installment lacks the power of the first. "Manderlay's" characters are not as well etched, its message is less complex and the production is altogether drab, and yet the film still maintains a level of interest with its microcosm of society. Once again the practical paternal crime lord warns Grace that her attempts to abolish slavery at Manderlay will result in a different kind of enslavement and reminds her of the pet bird she freed in childhood was found dead beneath her bedroom window. But Grace refuses to listen. One slave escapes unseen to run away with a rich white woman. Grace's spirits begin to deflate when an older houseboy, Willem (Danny Glover, "Saw"), appears to be on the run, but instead he comes and invites Grace in. Manderlay's owner, Mam (Lauren Bacall, "Dogville") begs Grace from her deathbed to burn the book used to run the plantation, but Grace insists all should be revealed. Grace's father leaves his lawyer, Joseph (Teddy Kempner, "De-Lovely," "Dear Wendy") and gunmen Mr. Kirspe (Udo Kier, "Dogville") and Mr. Robinsson (Jean-Marc Barr, "Dogville," "Cote d'Azur") behind and leaves. Grace has contracts written up - Manderlay's Mays family will do manual labor while their former slaves will be freed and given parcels of the plantation. Grace is dismayed, though, when the newly freed prefer to play cards to working their land or repairing their huts. Afraid that cotton planting time has past, she consults Mam's book and discovers Manderlay's blacks have been categorized into seven groups, with category 1, the 'proudy nigger,' consisting of Timothy (Isaach De Bankolé, "Coffee and Cigarettes," "The Skeleton Key"), receiving the least food, and category 7, the 'pleasing nigger,' being the best looking and therefore most manipulative. Willem, her consultant, doesn't seem as riled as she by the injustices and advises her on how to proceed with the planting. Grace decides to institute a series of 'lessons' to turn things around and form a democracy and initially things begin to seem better. But Grace's proposed changes bring disaster to Manderlay and her democratic methods result in corruption and the establishment of capital punishment (albeit 'humane' in Grace's hands, von Trier underscoring his point). While Grace's trajectory at Manderlay is very similar to what she experienced in Dogville - rape, betrayal and revenge - Grace herself has changed dramatically. No longer the well-meaning innocent victim that Kidman portrayed, Howard's Grace is the Ugly American, a friendly do-gooder bringing democracy to the repressed despite whether it is their wish or in their best interests. Grace maintains control with the implied threat of her gun power and loses it when they withdraw. This Grace also has prurient interests in the 'proudy nigger,' making one ponder whether von Trier named "Manderlay" with "Mandingo" in mind. It is ironic that von Trier belittles Grace with Manderlay's blacks when she mistakes one for another because he has writ so many of Manderlay's denizens with little to distinguish them. The Mays family sees their matriarch gone within opening minutes and are only noticeable as returning players from "Dogville" (Jeremy Davies, Chloë Sevigny). The writing and the cast are second tier to "Dogville" and von Trier's 'surprise twist' eighth chapter revelation has been obvious since his staging back in chapter one. Manderlay's layout doesn't make the same strong visual statement that Dogville did, the wide scope of a plantation inherently less interesting than a town when chalked on a sound stage floor and the malaise seems to have affected cinematographer Anthony Dod Mantle ("Dogville," "Millions"), whose lighting is less definitive and lensing less crisp. One only need compare the repeat of a geometrical overhead shot, Manderlay's young Claire lying dead in her coffin vs. Dogville's Grace attempting escape in an apple cart, to see the difference. "Manderlay" has more the look of a filmed play than the stylish technical vibrancy exhibited in the first film. And so, with "Manderlay" von Trier has painted the U.S. as imperialist subjugators flying the banner of democracy, a rather common observation in many films lately, even those coming from U.S. shores, and a country that still enslaves its black citizens in one way or another. "Manderlay" is strong enough to interest those who appreciated "Dogville," but only just. "Manderlay" had more inherent drama in the news reports of John Reilly's cast defection in protest to von Trier's mule killing (the mule appears in the film, but its shooting was cut). Like "Dogville," "Manderlay" ends with Bowie's "Young Americans," the depression era photos of the former replaced here with stills of lynchings and urban poverty.

Grace (Bryce Dallas Howard (“The Village”)) has survived the degradation and humiliation of her experience as a virtual slave in Dogville - with the help of her gangster father (Willem Dafoe). As they head back to the big city they come upon an isolated old plantation that, in 1933, is still a society of white masters and black slaves. When they intrude upon a flogging of one of the slaves, she is incensed by this gross injustice. Grace takes on the task, again with her father’s help in the form of his henchmen, of putting right the wrongs of “Manderlay.” Lars von Trier has always been an imaginative, creative and artistic filmmaker since he came to my attention with “Europa” (1991). The first film (“Dogville”) in his trilogy, entitled “USA – Land of Opportunity,” was one of my favorites from 2003. It’s the story of a young woman (Nicole Kidman) who enters an isolated town, penniless and on the run, and proposes that the townsfolk make use of her labor in exchange for room and board. The slow-building tale of Grace being increasingly indentured and abused was done with tremendous imagination – shot on a huge soundstage with the town’s buildings just chalk marks on the floor and a few props – and was an intriguing character study on several levels. Von Trier follows up on this artistic tour de force with “Manderlay” (and the in-the-planning-phase finale to his trilogy, “Wasington.”) The second entry into the trio pales by comparison to “Dogville.” It has the look of the first with its similar set design (now the titular cotton plantation) but the favorable comparison stops there. The first film starts off innocently enough with Grace’s needs provided for by her town benefactors, only to be replaced by their constant and unreasonable demands and abuses. Manderlay” picks up where “Dogville” ends, with Grace and her dad heading back to the big city. Grace and her father (played with menacing effect by James Caan in “Dogville” replaced here with Dafoe, playing more like a doting pop than ruthless gang boss), along with his entourage of thugs, come upon Manderlay, a true throwback to the pre-Civil War South. The plantation masters, led by matriarch Mam (Lauren Bacall), run a mostly benign business with their enslaved wards living a relatively comfortable life. Grace arrives and, with her own past experience, is incensed by the servitude of the blacks and takes matters into her own hands. With her dad’s henchmen at her beck and call, Grace imposes dramatic changes on Manderlay. The owners and overseers become indentured servants, doing the bidding of their former possessions. The ex-slave population falls under Grace’s well-meaning tutelage as she tries to teach them democracy, free market economics and the importance of the right to vote. Her efforts don’t go quite the way she expects. Casting Bryce Dallas Howard as Grace, replacing Nicole Kidman, is the first of several weaknesses in Manderlay.” The young actress lacks the experience to lead the large cast and she makes Grace a naïve idealist who lacks people skills. The script, by von Trier, also fails to flesh out the characters of the supporting cast, making each player nondescript at best. Techs are second rate when compared to “Dogville.” Photography, by Anthony Dod Mantle, is muddy, which is a surprise since he also lensed the first of the trilogy and gave that film a crisp look, beautifully lighted. Art direction, by Peter Grant, another Dogville” alumni, is saddled with the less defined plantation setting that lacks the variety afforded in Dogville.” Other techs are equally bland. The screenplay is also second rate with its liberal preachiness and obvious disenchantment, by von Trier, with American hypocrisy. His road-to-hell-is-paved-with-good-intentions allegory hits you over the head again and again, making me scream, inwardly, “OK,OK, I get it!” This is not Lars von Trier at his best.