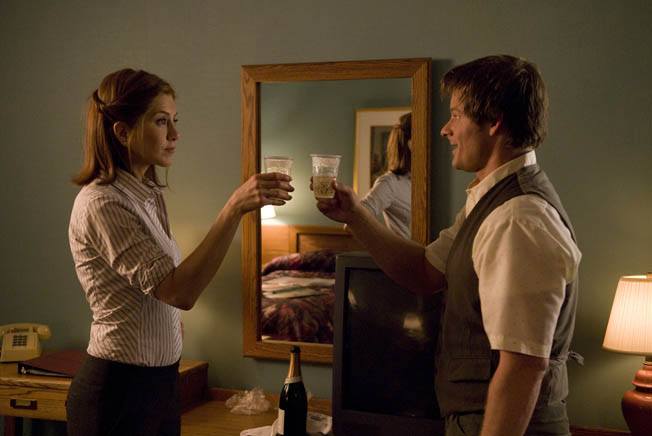 Mike (Steve Zahn, "Sunshine Cleaning," "The Great Buck Howard") works as the night manager and all around handyman at his parents' motel, The Kingsman, in a small Arizona town. It's a dull existence until Mike gets an eyeful of business traveler Sue Claussen (Jennifer Aniston, "Marley & Me"). Tongue tied, Mike tries to get Sue's attention by delivering free bottles of wine, compliments of the "Management."

Writer/director Stephen Belber hands over yet another quirky romantic comedy where the odds are wildly uneven and obstacles abound on the way to a pre-ordained happy ending. Despite the participation of America's sweetheart Aniston (who also exec produced) and indie comedy Everyman Zahn, "Management" mostly falls flat because Zahn fails to make us fall for him. His is a one note performance of utter, wide-eyed devotion that does not engage on a mature emotional level. "Knocked Up's" Seth Rogan stood a chance because he had personality. Zahn just hands us a winsome baby animal picture. There are pleasures to be found, though. Belber's writing is a mix of real character observation (Sue's melancholy is revealed to Mike's mother which gives her reason to believe her son has a chance) and the type of indie cliches that make one wince (Mike parachutes into a swimming pool with the precision of a special ops agent; Mike and Sue ride bumper cars; Mike becomes a Buddhist monk - hey! "Anger Management!"), but when he's on he's spot on (Sue dreams of running a soup kitchen and Mike, essentially, is homeless). Sue's place of work (she sells commercial 'artwork'), Corporate Bliss, is just as soulless as an Arizona motel room. When she opts for the security of ex-boyfriend Jango (Woody Harrelson, "Semi-Pro," "Seven Pounds"), a former punk rocker turned yogurt mogul, she lands in a McMansion, but a glimpse of Mike's parents' house revealed a real home. Meanwhile Mike's stalker behavior emphasizes his lack of a nest. When he shows up in Maryland at Sue's place of work, he ends up sleeping on her living room floor. In Washington State, where he aims to overthrow Jango, he's taken pity on by Al (James Liao, "Hard Luck," TV's "Prison Break"), the son of Chinese restaurant owners who gives him a job and a bed in the basement (shades of "The Rocker!"), where Mike is surrounded by supplies, just like home. Still, even lonely and with a loser job, would Sue offer Mike the opportunity to 'touch her butt,' then give him a shag in housekeeping before departing? What does Jango of the exciting background and current wealth see in mousy Sue (Aniston is clad in sweaters and coiffed in a ratty-ended bob)? I was much more interested in the offbeat Al, a terrific sidekick, who helps Mike serenade Sue on a souped-up mobile food cart (um, "Say Anything," anyone?). Truth be told, the real story in "Management" is the one between Mike's parents. As played by veteran characters Margo Martindale ("Paris, je t'aime," "Walk Hard: The Dewey Cox Story") and Fred Ward ("Tremors," "Feast of Love"), there is a story of love and family to be read between the lines. "Management" wears its quirk on its sleeve and its heart up it.