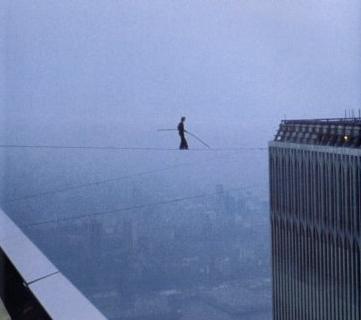 The tightrope walker had pulled some amazing stunts like wire-walking between towers at Notre Dame cathedral in Paris in 1971 and the Sydney Harbor Bridge in 1973. When he saw news articles about the building of the world’s tallest buildings ­ the two towers of the World Trade Center ­ Philippe Petit decided to tackle his greatest aerial feat of all in Man on Wire.”

On Tuesday, August 6, 1974, Philippe Petit and a group of coconspirators spent the evening on the roofs of the World Trade Center, hiding from security guards and setting up a cable that would span the towers. That next morning, Petit stepped out onto that cable and danced across the wire eight times 1350 feet in the air before being arrested for trespassing and disturbing the police, turned in as "Man on Wire." This is a documentary that speaks for itself, so mind-blowing is Petit's feat that words do not do it justice. Petit is a fan of caper films and director James Marsh ("Wisconsin Death Trip," "The King") has built "Man on Wire," which is based on Petit's book "To Reach the Clouds," like a heist film. We're introduced to Petit's earlier stunts, then told of how, as a teenager in a dentist's office, he first saw an article about the proposed WTC and decided then and there that he would wire walk between the towers before they were even built. In order to fully grasp what Petit accomplished, one must realize that he contacted the WTC president under cover as a French journalist in order to interview building workers and photograph beams. He had to arrange to smuggle in a vast amount of equipment. He had to figure out how to get an extremely heavy cable from one tower to the other, a distance of 200 feet, and then he had to figure out how to secure it against the buildings' swaying and winds. The night before he spent an hour on the wire, he and his amazingly loyal accomplice Jean Louis had to sit perched on a beam under a tarp suspended 400 meters in the air for three hours to escape detection. The relationships which supported this jaw-dropping stunt were also forever changed by it. Petit may be artistic, heroic even, but his singular vision demands a strong ego. One friend is still driven to tears recollecting events over thirty years later and the romance between Philippe and Annie collapsed after he achieved his dream. She was part of it and when it had been done, so went the love affair. The film is built with some extraordinary archival footage (Petit had childhood friend Jean-Louis, a photographer, as an assistant from adolescence and girlfriend Annie as support), reenactments and interviews with not only the animated Petit, but from his coconspirators, which included Americans with access to the WTC. Animation and split screens, still photographs, stop motion, black and white and color are all employed to great effect by Marsh. In addition to this incredible story is the time capsule of the early 70's. New York City was a very different place. Security was a very different thing. (While he was arrested, the authorities were as awed as the passersby - Petit was given a lifetime pass to the WTC's observation deck!) Always unsaid, of course, is that the towers no longer stand. No one will ever again walk in the clouds the way Petit did that day.