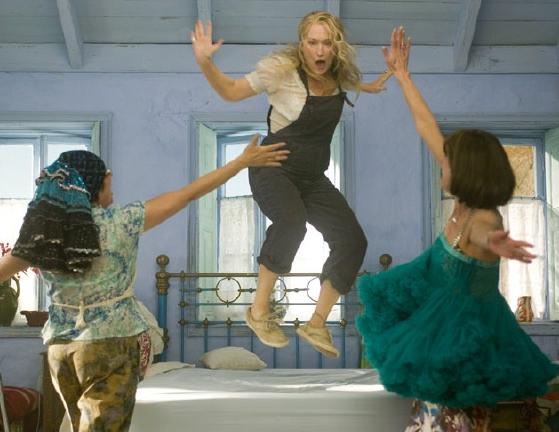 On a beautiful Greek Isle where she helps her single mom run a remote hotel, Sophie (Amanda Seyfried, "Mean Girls," "Alpha Dog," HBO's "Big Love") is preparing for her wedding. Everything is set except for one huge issue - Sophie's mom Donna (Meryl Streep, "The Devil Wears Prada") was never sure who her father was. Sophie recently found mom's journal from that summer twenty years and ago and has secretly invited the three possibilities, convinced she will know her father when she sees him, but when Donna discovers her three former flames stashed in her old goat house, it's "Mamma Mia!"

Stage director Phyllida Lloyd should kneel and kiss the feet of her cast who persist in entertaining us despite every roadblock she throws in their way. With no sense of how to block a shot and truly amateurish looking cinematography (Haris Zambarloukos, "Enduring Love," 2007's "Sleuth") and editing (Lesley Walker, "Shadowlands," "Tideland," perhaps doing the best with what was available), "Mamma Mia!" has been ineptly moved from stage to screen. But even if it were filmed by a tourist on an old Super 8 camera, Meryl Streep having fun is, well, Meryl Streep having fun and it's infectious. With her long, blond hair trailing wildly around her and her half-hitched denim overalls, Streep's Donna is a hippie earth mother with a notable past, from her string of lovers to her singing career with Donna and the Dynamos. Those Dynamos are Rosie (Julie Walters, "Educating Rita," "Harry Potter and the Order of the Phoenix"), a single cookbook author, and Tanya (Christine Baranski, TV's "Cybill"), a thrice-divorced, high maintenance diva and their arrival kicks things off into a far higher gear than Sophie's two indistinguishable pals do (Rachel McDowall and Ashley Lilley, given nothing to do but make up two-thirds of the film's three trios). No sooner are they entrenched than Tanya's creating sparks with bartender Pepper (Philip Michael) about a third her age and Rosie's playing dressup, trying to get Donna out of her crumbling hotel funk, as the girls break out into "Dancing Queen." The number's a real highlight even if it is threatened by too much out of focus closeup. Another is "Money, Money, Money," one of the only scenes Lloyd stages well, with Streep standing at ship's bow trailing yards and yards of flowing fabric flanked by her backup singers on Skidoos. Meanwhile, the three potential dads are gathering. Businessmen Sam Carmichael (Pierce Brosnan, "Die Another Day," "The Matador") and Harry 'Headbanger' Bright (Colin Firth, "Then She Found Me," "When Did You Last See Your Father?") miss the ferry and are offered a ride on Swedish adventurer/author Bill Andersen's (Stellan Skarsgård, "Exorcist: The Beginning," "Pirates of the Caribbean: At World's End") boat. It's pretty clear that Sam's the one Donna's most upset about seeing, as he presumably ditched her to go back to a fiancee in England. Brosnan, who I recall singing rather well in "Evelyn," is horrible here, but endearingly so. Perhaps that's the point. However, Lloyd foists all six choruses of "The Winner Takes It All" on Streep in a pre-wedding number between her and Brosnan in which the actors, particularly the non-singing Brosnan, run out of ideas what to do with themselves, seeing as how their director keeps them on one rocky outcrop. When in Doubt, Lloyd also has a propensity for lining people up - twice on a pier for musical numbers, almost always when presenting Brosnan, Firth and Skarsgård. Her use of literal Greek choruses also lacks inspiration. The wedding itself offers surprises, as does the extended celebration afterwards in which, of course, everyone is paired off. And of course, that old legend about Donna's hotel being Aphrodite's spa wasn't told early on for nothing. The closing credits feature two more musical numbers, once again unartfully shot, but everyone's so into taking the piss out of themselves, audiences are sure to stay until the end. "Mamma Mia!" may be amateurish filmmaking, but it sure makes one want to party with these people.