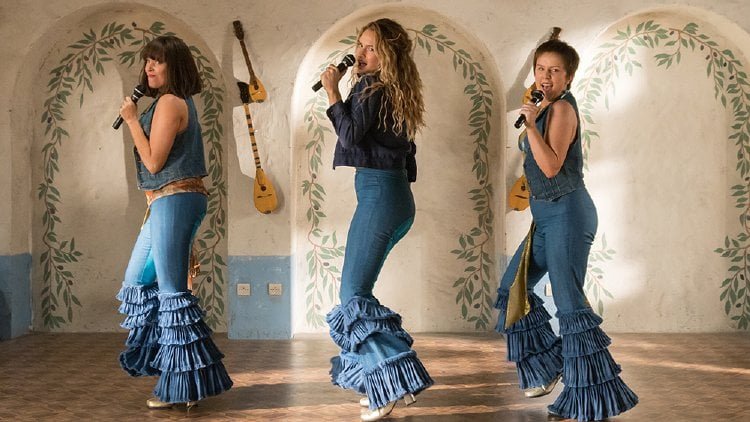 A year after her mom Donna's (Meryl Streep) death, Sophie (Amanda Seyfried) is anxiously preparing for the opening night celebration of the renovation she has done on Donna's old Greek seaside hotel, rechristened Hotel Bella Donna. With stepdads Harry (Colin Firth) and Bill (Stellan Skarsgård) unable to attend and her husband Sky (Dominic Cooper) contemplating a hotel management job in New York, only Sam (Pierce Brosnan) and mom's lifelong friends Rosie (Julie Walters) and Tanya (Christine Baranski) are there to comfort her when a storm disrupts all her plans in "Mamma Mia! Here We Go Again."

Ten years after the original Streep led celebration of all things Abba and an unconventional life, we're back with new writer/director Ol Parker ("Imagine Me & You") to look both forward and back. The good news is that Parker is a far stronger filmmaker than Phyllida Lloyd and Lily James positively sparkles as the young Donna. Unfortunately James has been surrounded with little known actors to portray her three lovers and two best friends and, excepting Jessica Keenan Wynn's Tanya, they are pale imitations of the originals. Likewise this film's song selections, Abba's biggest hits, save 'Fernando,' consumed by the first film (a couple, like the titular track and 'Dancing Queen,' have encores here). Cap everything off with the late breaking appearance of Cher, looking like a waxwork as Sophie's estranged grandmother Ruby, and your enjoyment of the film will directly correlate to how many choreographed song and dance numbers you can tolerate. The first flashback establishes Donna as a free spirit from the get go, Oxford University's valedictorian shedding her robes to engage the entire class along with Dynamos Tanya and Rosie (Alexa Davies) in a spirited rendition of 'Kiss the Teacher' which even the school vice chancellor (Celia Imrie) joins. Discussing future plans, Donna announces she's off to find her fate, walking directly from an airport escalator into the streets of Paris (Parker uses several imaginative transitions like this, although they fall off as the film progresses). After a meet cute with Harry (Hugh Skinner, failing to live up to Harry's 'Headbanger' nickname) in a Paris hotel lobby and a boisterous restaurant staging of 'Waterloo,' Donna's off to Greece where a missed ferry finds her petitioning a ride in Bill's (Josh Dylan) boat. Disembarking, she immediately squats in a run down farmhouse whose crumbling structure endangers a horse. Looking for help, she encounters Sam (Jeremy Irvine) and sparks fly for the third time, albeit burning more brightly. Entranced by the truly awful performance of Lazaros (Panos Mouzourakis) in the local taverna, Donna asks to audition and is hired on the spot by Lazaros, whose mother just happens to own the old farmhouse. She invites Donna to stay for free if she'll fix up the property. Heartbreak and miscommunications ensue, but Donna is happy with her single life, that now includes her beloved daughter. Everything about this production, from production design to cinematography and choreography, is far superior to the original. I'm beginning to be convinced James can do anything, the young actress exhibiting a fine singing voice and polished dance moves. But Skinner and Irvine are almost interchangeable and Davies never convinces as a match for Walters. Parker's sprinkled his back story with neat little tidbits, like the tale of fisherman Alexio's wooing of Apollonia and life in the taverna, but the current day catastrophes are far less interesting, at least until a luminous Streep appears as a spirit for a 'My Love, My Life' duet with Seyfried. Andy Garcia is introduced early as Sophie's new hotel manager only to disappear entirely until a huge coincidence puts him in the spotlight. Cher seems to have stepped into the proceedings from another planet entirely, her end credit performance jarring, Vegas on the Greek coast. "Mamma Mia! Here We Go Again" works in fits and starts, just like the original, but for different reasons. Grade: