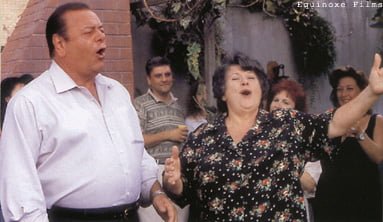 Maria and Gino Barberini (Ginette Reno and Paul Sorvino) emigrated from the old country to Montreal's Little Italy community 30 years ago. They hold dear the values of their birth land and their world is shattered when their son, Angelo (Luke Kirby), announces that he is getting his own apartment. But, when they learn that Angelo's boyhood friend, Nino (Peter Miller), is moving in, too, their relief is palpable. That is, until they learn that the young men are more than roommate - they're lovers - in "Mambo Italiano."

Angelo (Luke Kirby, "Shattered Glass") has some real problems, he tells the Gay Hotline, mostly due to his Italian heritage. Tired of being fixed up with 'nice Italian girls' by his mom Maria (Ginette Reno, "Leolo"), Angelo decides to come clean about his roommate Nino (Peter Miller), a childhood friend who is now a Montreal policeman and his lover. Maria and dad Gino (Paul Sorvino, "Goodfellas") become engaged in games of self-denial and one upmanship with Nina's mother Lina (Mary Walsh, "New Waterford Girl") while Nino rejects his outed lifestyle in "Mambo Italiano." Canadian writer/director Emile Gaudreault ("Wedding Night") goes the "Big Fat Wedding" route with this shrill, artificial tale of gay romance amidst ethnic family comedy. Canadian singer Ginette Reno is the lone standout in a cast of characters that are either unconvincing or unlikable. Some initial chuckles come via Sorvino's immigration soliloquy, where he discovers that not only is Canada the 'fake' New World, but that within those boundaries, Quebec is the 'fake' province to Ontario's 'real' one. His is a life of disappointment. Sister Anna (Claudia Ferri, "Leolo") arrived after the event known as 'what your father did to me while I was sleeping' followed by the hapless Angelo, bullied at school until even his best buddy Nino dropped him. Only an adventurous aunt, who taught Angelo how to dance, provided a ray of sunshine, but she was snuffed out by the conventional life forced upon her by family. When Angelo runs into the adult Nino, sparks fly, but Nino once again becomes embarrassed to be seen with Angelo. He's set upon by Pina (Sophie Loraine), a big-haired harridan whose marriage dreams dovetail nicely with Lina's agenda to prove that her son is not gay. Angelo sulks until he's pursued by the man at the other end of the gay hotline and his parents take pride in him in order not to be outdone by Lina Paventi. Joan Plowright lookalike Ginette Reno is wonderfully warm and funny as Maria Barberini, but Sorvino resorts to exaggerated hand-wringing while overdoing the spaghetti stylings. Claudia Ferri is annoyingly shrill and her character's quirks are both underwritten and unfunny. Kirby's schlemiel cannot help but be sympathetic amidst this cacophony and his sarcastic telephone nature produces some real laughs, but his dire rantings about his Italian heritage being the root of his problems are never justified. Walsh and Loraine play broadly and brassy. Gaudreault has written Nino as selfish and shallow leaving Miller will little to do. "Mambo Italiano" has an extremely artificial look resembling cheesy television sets from the 1970s, making it unclear as to what decade the film is set in.

"My Big Fat Gay Italian Relationship" would have been a more appropriate name for a movie that tries to be a mainstream ethnic family comedy that deals with being gay, with all the wacky consequences, but does so only on a superficial level. Based on the unproduced stage play by Steve Galluccio, helmer/scribe Emile Gaudreault takes us to the Italian enclave of Montreal as Angelo calls a gay hotline to tell his life story. Angelo has always been the underdog, picked on in school and forced to have a secret friendship with the more outgoing Nino. But, Nino, too, rejects his friend and Angelo comes to realize that he is different. His family drives him crazy and, when he tells his parents that he is getting his own place, his father, Gino, tells him that a good Italian boy should only leave his parents home in one of two ways - get married or die. Angelo exercises his third option and, shortly after he moves in to his new digs, he is burglarized. All hell breaks loose in the Barberini household. Their fears are tempered, somewhat, when mama and papa learn that now-a-policeman Nino is going to move in and become their son's protector, at least in their parental eyes. This comfort is short lived, though, when Angelo and Nino become more than roommates. Nino wants to keep his gay relationship secret, to protect his job, but word soon gets to the Barberinis. "Mambo Italiano" follows the expected path where both Angelo's parents and Nino's mother, Lina (Mary Walsh), believe that the love of a good woman will straighten everything out, so to speak. Nino, too, because of how it will affect him, wants to distance himself from Angelo and beds the very willing Pina (Sophie Lorain) to prove himself a macho Italian man. Angelo, of course, finds himself and is comfortable with being gay and everyone lives happily ever after. Casting, for "Mambo Italiano," is awkward. Luke Kirby is totally miscast as the focal Angelo. The actor doesn't have the on-screen presence to anchor the film - I did not care what happens to Angelo - and too much reliance is placed on the shoulders of the veterans. Unfortunately, and surprisingly, Paul Sorvino gives a campy treatment to Papa Barberini with a horribly clichéd Italian accent and forced performance that is only a little better than Michael Constantine's silly father character in "My Big Fat Greek Wedding" - at least Gino doesn't carry around a bottle of Windex. Ginette Reno, as Mama Barberini, helps things out some with her convincing spin on the demanding, very vocal matriarch of the Barberini family. Mary Walsh is shrill as Nino's mother and lays on an accent as bad as Sorvino's. Peter Miller, as Nino, and Sophie Lorain as his love interest are bland with neither looking the part of an Italian-Canadian. Claudia Ferri, as Angelo's neurotic sister Anna (she goes to see a shrink, but only once, then on to the next one and the next?), is burdened with a sidebar story that is pretty pointless. Techs are bright, artificial and exaggerated with colors, colors, and more colors kicking things up a notch, but adding not much to the equation. The outcome is a film that looks like a TV show and, I'm sure, it is being touted, somewhere, to be a comedy series. I hope not. "Mambo Italiano" should go straight to video and not hog a big screen at a theater near you.