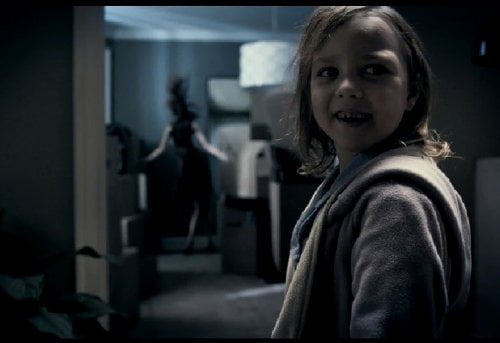 When their parents died, young Victoria (Megan Charpentier, "Red Riding Hood") and Lilly (Isabelle Nélisse) vanished without a trace. Their young uncle, Lucas (Nikolaj Coster-Waldau, HBO's 'Game of Thrones'), and his girlfriend Annabel (Jessica Chastain, "Zero Dark Thirty") have been searching for them for five years when they're found in a ramshackle lake house deep in some woods. Soon after taking the girls into their home, though, Annabel becomes convinced something uninvited came with them in "Mama."

Producer Guillermo del Toro ("Pan's Labrynth") watches a lot of shorts and one by Andy Muschietti called "Mama" so impressed him he contacted the filmmaker to talk about turning it into a feature (watch it here). I had my reservations about just how a 3 1/2 minute short, especially this one, could survive the adaptation, but damned if they haven't pulled it off - for all of about 60-70 minutes. Director Andy Muschietti, his producer sister Barbara and their cowriter Neil Cross (BBCA's 'Luther') came up with an interesting haunting angle and a before-she-was-famous Jessica Chastain does her bit to raise up the material, but the filmmakers seriously lose their grip with a protracted finale that overexposes its titular monster (Javier Botet, "[Rec]") and turns downright silly. That's not to say there aren't some problems before then, but the set up's pretty effective. After hearing a news account about a two financial execs being shot, we see blood-spattered dad Jeff arriving home and announcing to his two Hummel-like daughters that they must leave immediately and that mommy 'isn't feeling well.' Jeff's plans to complete his murder-suicide are interrupted by a creature that looks part wraith, part tree branch (you can see Del Toro's sensibilities) in the dilapidated home they've taken shelter in. Five years later, those little girls are still alive, but feral. However after the eldest, Victoria, responds to her uncle after he returns her eyeglasses, their psychologist, Dr. Dreyfuss (Daniel Kash, "On the Road"), decides they can go home. But not after a custody battle with the girl's mother's sister Jean (Jane Moffat, also providing Mama's voice), who has the financial means artist Lucas and his rocker girlfriend do not. There are the usual bumps in the night, strange child behavior and interactions we can see but the adults on screen can not before Lucas is attacked and ends up in a coma. This leaves Annabel, first seen rejoicing over a negative pregnancy test, in charge of these two strange little creatures, and once she has a bonding experience with Lilly, it's a battle of maternal wills. While the short delivers a good, creepy jolt, the filmmakers overdo things here. Lilly is shown scuttling about in a manner that obviously recalls "The Exorcist's" infamous spider walk, and it is clearly not natural (and clear it is not Nelisse who is accomplishing it). The kids make provocative drawings all over the walls, but the device is too close to last year's "Sinister." Mama herself is kind of creepy, as long as they keep her mostly suggested or seen in real quick cuts. She's even creepier when her human form is revealed as a woman with such exaggerated Slavic features she resembles an alien. This happens by way of an old photograph and a dream of Annabel's that is truly unsettling. And then there are all the questionable character motivations. Lucas is practically forgotten once he enters his coma, only to release himself out of the hospital to show up on a rural road where he's almost hit by Annabel who is en route to the same place. The shrink makes one unethical move after another. And no matter how much the filmmakers might deny it, their finale uncomfortably suggests that it is OK to favor one child over another, especially if the unfavored one isn't normal. It should be noted that the kids are pretty good here, asked to perform in radically different manners. "Mama" starts out with far more promise than one might expect and Jessica Chastain shows how much genre material like this is improved when good actors are cast, but everything is squandered when the 'less is more' approach is dropped and the writers over-mythologize their material.