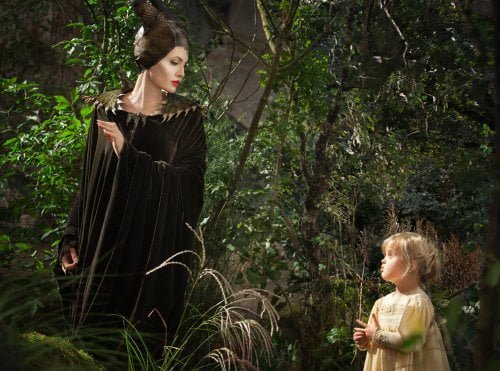 Beautiful young faerie Maleficent (Ella Purnell) is a kind-hearted and loving creature living in an idyllic forest fantasy world called the Moor. Years later, now all grown up (Angelina Jolie), the faerie queen meets her first human, Stephan (Sharlto Copley), and they fall in love. He leaves her, opening the door for ambitious King Henry (Kenneth Cranham) to invade her beloved forest. The king does not know, however, the incredible powers of “Maleficent.”

There were once two neighboring villages - one where normal people lived, ruled by a greedy King Henry (Kenneth Cranham, "Hot Fuzz"), the other a place of magical creatures protected by a fairy with enormous wings. That fairy fell in love with a human, one whose ambition in later years would turn the delightful creature into the vengeful "Maleficent." The directorial debut of "Life of Pi's" visual effects artist Robert Stromberg is chockablock with sumptuous imagery, not the least of which is a glamorously chiseled Angelina Jolie, but in revamping the fairy tale, screenwriter Linda Woolverton ("The Lion King," "Alice in Wonderland") has thrown the baby out with the bathwater. Falling into the same trap as "Oz the Great and Powerful," Woolverton's revisionist take uses the spurned love of a supernatural female as the catalyst for an evil makeover and makes a muddle of the original Sleeping Beauty tale in the process. The film opens like a picture book, Janet McTeer's ("Albert Nobbs") stately narration lulling us into bedtime story land as we first spy the magical world Maleficent (Isobelle Molloy) calls her home. Trees speak and pixies Knotgrass (Imelda Staunton, "Harry Potter's" Dolores Umbridge), Flittle (Lesley Manville, "Another Year") and Thistletwit (Juno Temple, "Year One," "Killer Joe") flit about like winged Munchkins. When a poor young orphan, Stefan (Michael Higgins), comes to the perimeter of the moors, Maleficent shows herself and the two become playmates whose friendship evolves into romance. But Stefan has ambitions of living in the palace, and when he becomes a servant of the King, he abandons her. When the dying King decrees his throne will go to the man who can kill the fairy his army couldn't, Stefan (now Sharlto Copley, "District 9") uses Maleficent's trust, but although he finds he cannot kill her (now Jolie), he cuts off her wings. She awakens to discover her mutilation and the moors become a less happy place, shielded by a giant thicket of thorns, and when Maleficent hears about the birth of Princess Aurora, she visits the place to bestow a gift - and a curse - upon the infant. The real stars of "Maleficent" are the art direction (led by David Allday, "Charlie and the Chocolate Factory") costume design (Anna B. Sheppard "Schindler's List") and makeup. The film's look draws from "The Wizard of Oz," "Harry Potter" and, of course, the Disney collection and special effects are wondrous, especially the many transformations of Diaval (Sam Riley, "Control"), a crow Maleficent saves from death who becomes various creatures as her servant. Costumes are finely detailed, yet organic to the story. Maleficent's ruby pout, eerie eyes, cheekbone prosthetics and twisted horns, the latter 'costumed' in adulthood, don't obscure Jolie but transform her. Other aspects of the production, like the film's 3D conversion, are also better than average - it's generally used for depth and the showy flying sequences (where, oddly, the adult Maleficent's skirts always hang straight). One can hear the influence of Danny Elfman in James Newton Howard's score ("Snow White and the Huntsman"). Jolie's quite good in a role where looks speak louder than words, although her pet name for Aurora, Beastie, rolls deliciously off her tongue, a mix of sarcasm and affection. Riley is so good as Diaval, who becomes protective of the young princess, one wishes Woolverton had made his lips the vehicle for the kiss that breaks Aurora's spell. The trio of British actresses who make up Pixies, given human form to act as Aurora's aunties, provide comic relief while carving out distinct personalities. As the grown up Aurora, Elle Fanning's ("Somewhere") only task is to be radiant and her Prince (Brenton Thwaites, "Oculus") is a mere pretty face. Sharlto Copley lacks presence as Stefan. "Maleficent" has a palace dungeon-full of spinning wheels, but Sleeping Beauty seems a mere pawn here. We see the curse lifted, but then it's not. Aurora is horrified to learn the real identity of her 'fairy godmother,' then apparently suffers from amnesia. The Prince is a necessary prop. Novelist Gregory Maguire ("Wicked") started a trend with his revisionist series of "Oz" books, but Disney's attempts to jump on his bandwagon are erratically contrived.

The story of Sleeping Beauty has been with us for centuries, from the 1697 The Beauty Sleeping in the Wood by Charles Perrault to the Grimm Brothers’ Little Briar Rose to, most famously, Disney’s 1959 classic, “Sleeping Beauty.” Almost all focused on the titular Beauty but Disney Studios takes the oft-told story and turns it on its ear. The perennial wicked queen, called Maleficent here, is far more complex than the character we are used to seeing or reading. This leads to some confusion since the mind is used to the bad guy wicked queen being the bad guy, not nuanced with a range of emotion and feeling, good and wicked. Angelina Jolie is ethereally gorgeous with her fantastical looks and a face that shows a range of emotions from kindly to murderous. Coupling this centered performance this with stunning costumes – all in black for Maleficent – and terrific special F/X that bring the creatures of the Moor, trees included, to life to battle the invading humans works well. My only complaint is there is not enough of effects and stunts and too much talking to push the narrative along. The production, with an estimated $200 billion budget, is of lavish proportions. The story, by Linda Woolverton, is based on the above-mentioned source material but confuses the myth with changes to the story. At one point, for example, a change-of-heart Maleficent reverses the spell on Aurora (Elle Fanning, the Sleeping Beauty)…but it does not reverse. The story also jiggers the “awakened by the kiss of a true love” part of the story, diverging from the familiar. The whole package is an entertaining spin on a classic story. It does not always work but it is an extravaganza of a movie.