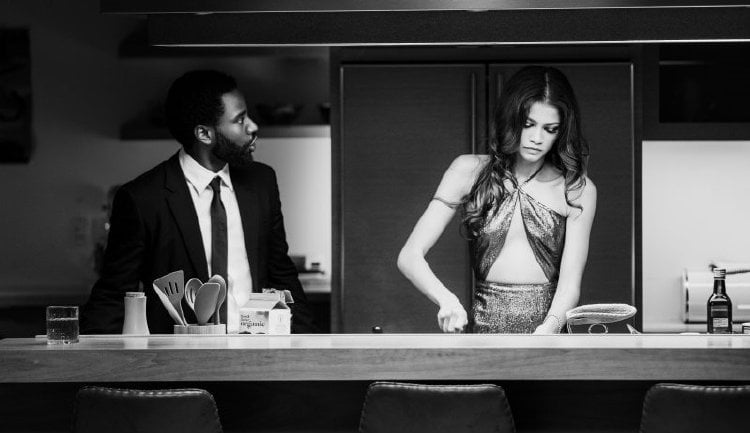 A hitherto unsuccessful filmmaker’s successful premiere is the catalyst for relationship trauma for “Malcolm & Marie.”

With Hollywood productions shut down during the pandemic, writer/director Sam Levinson decided to make use of his on-hold ‘Euphoria’ crew and star with this two-hander relationship drama.  Not being able to get a shooting permit in Los Angeles, Levinson and his team ended up in Carmel where the Caterpillar House provides a spectacular setting.  He spun the story from his own personal experience, having forgotten to thank his wife, Ashley, after the premiere of his 2018 film “Assassination Nation.”  She produced this one.  'Euphoria' cinematographer Marcell Rév (“White God”) achieves Levinson’s dream of old Hollywood by shooting on 35mm b&w film.

The glamorous couple that arrives in the glass walled house immediately split up, Marie (Zendaya) heading to the toilet while Malcolm (John David Washington, whose sister Katia was an “Assassination Nation” producer) puts on a record and begins to dance (Rév follows him with an outdoor tracking shot down the length of the house and back).  He’s on a high, having been surrounded by admiring critics after the house lights came up, the ‘white lady from the LA Times’ having compared him to Spike Lee, Barry Jenkins and John Singleton (this comparison will later suffer his own derision).  Marie comes out into the kitchen and prepares boxed mac ‘n cheese for him, but Malcolm comes to realize she’s angry and begins to prod, noting that she is ‘meek’ around his star Taylor.  Wrong thing to say.  And what’s bothering her is that he failed to thank her in his speech, even though she’d accepted his apology for the oversight earlier.  We learn she was his muse, a former drug addict whose experiences he used for his film.

And so we have a conversation that ebbs and flows all evening long, periods of willful hurt followed by introspection and contrition.  There is deep resentment on both sides.  There is also love.  The film is purposefully reminiscent of “Who’s Afraid of Virginia Wolfe?” without quite as much crazy or alcohol.  Levinson is, of course, also delving into the nature of filmmaking itself, Malcolm’s tirade against that same LA Times critic after reading her (rave) review one of the film’s funniest moments as he rejects her politicization of his race.  The relationship of artist and muse is, of course, its very heart.

The film does begin to feel a bit repetitive around its midpoint, Marie’s continual need to probe sore points as wearying to the audience as to Malcolm.  Thankfully the two actors are so committed, Washington in particular commanding attention, that they keep us rooting for the relationship.  Both are adept at switching mood, anger converted into shared laughter at the drop of a hat.  Neither is, of course, difficult on the eyes.  Nor is the location, a sleek modern marvel designed to flow into the landscape.  Marie’s frequent outdoor smoke breaks not only allude to old world Hollywood films, but allow Levinson a change of scenery.  A front-of-the-mix jazz score by Labrinth seems to accentuate the modern architecture.

With “Malcolm & Marie,” Levinson complicates the power dynamics of a relationship with the artistic demands and insecurities of Hollywood and wraps it up in a shimmering black and white package.