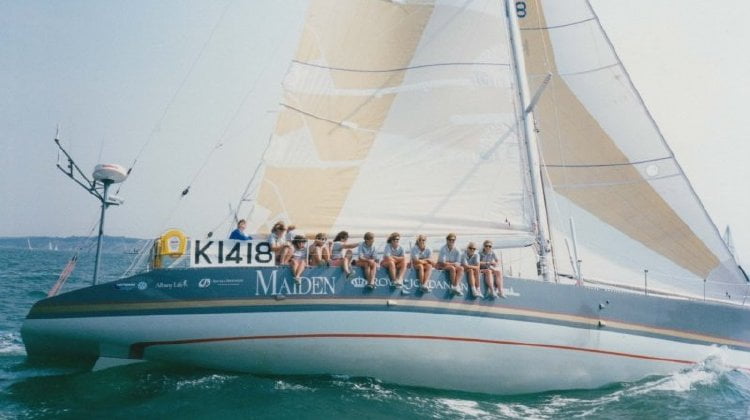 Tracy Edwards was a cook aboard charter boats, skippered the first all-women yacht crew in an around-the-world race (finishing second in class) in 1989, was named the first female Yachtsman of the Year and was knighted by the queen. The story of the record-breaking voyage is brought to new light in “Maiden”

When Tracy Edwards' beloved dad died when she was 10, her mother struggled, remarrying a man who turned out to be an abusive alcoholic. Tracy ran away at 16, becoming a member of a tribe of hard partying, constantly moving boat crew workers. When she learned about the Whitbread Round the World Race, 32,000 miles of open sea yachting, she begged until she found one of only four positions given to women in 1985, that of a cook. The experience, featuring camaraderie but also gobs of sexism from all quarters, made Tracy determined to form the first all female crew for the 5th race in 1989. For four years she struggled, mortgaging her house to pay for a beat-up second hand racing yacht and eventually using a prior passing acquaintance with Jordan's King Hussein for sponsorship of the 58-foot "Maiden." Alex Holmes took on the challenge of making this story into a film when he heard Tracy Edwards speak at his daughter's elementary school. Although he is a documentarian, he'd envisioned a feature, never suspecting that Edwards had had two video cameras on board during her historic race, one manned by girlhood best friend Jo Gooding, the Maiden's cook, the other mounted on the back of the boat. Combining these old tapes with news footage from the time, animated route maps and present day interviews, Holmes and his editor Katie Bryer have fashioned one of this year's most rousing and emotionally satisfying documentaries. This one had me busting with pride for my gender. The stage is set with Tracy's childhood, featuring a mom who drove go-carts and a dad who engineered them. But things quickly take a sad turn, resulting in an angry and rebellious teenager, traits which would live on in the young skipper. She gets into the boating life when, working at a bar, she's asked if she'd like to be the stewardess for a charter which just lost theirs. She set sail that very evening, reveling in the lifestyle's freedom. After initially being rejected for cook aboard Atlantic Privateer for the 1985 race, Tracy had a chance meeting aboard a boat with King Hussein, who heard her story and told her she simply must pursue this. She persevered and got the spot, but wanted more. The seemingly easiest part of her four year struggle to enter into the 5th race was attracting an extremely talented crew, one who were willing to take on the restoration of the Maiden, tough work that nonetheless gave each of them a thorough understanding of their vessel. Even the crew's doctor, Claire, took on the job of learning plumbing, figuring she had experience with human fluids. That doctor was involved in the Maiden's initial kerfluffle, a leadership clash between Tracy and her First Mate Marie-Claude that resulted in the latter's firing days before the start of the race. The Maiden and her crew were treated as a puff piece by journalists who, along with the race's male crews, didn't think they'd even finish the first of the race's six legs. The Guardian's Bob Fisher labeled them 'a tin full of tarts.' They all ate crow when the Maiden sailed into Punta del Este, Uruguay, but Tracy was disappointed to be third out of the four in her class. What she and her crew did next was simply astonishing, winning the longest and most difficult leg of the race. Even then their accomplishment was regarded as a fluke, so she showed them again. And although the Maiden subsequently lost too much ground reacting to a leak in the race's fourth leg to win, their welcome back at Southampton not only surpassed the winner's (in a truly wondrous moment), Tracy became the first woman to be awarded Yachtsman of the Year. The film is full of all kinds of drama, from the stomach churning look at 'surfing' huge waves to snow piling up on deck in twenty below temperatures. When two men are swept overboard on a competitor's boat, Claire talks them through revival efforts over radio (one man died). A military helicopter from the Falkland Islands is kept on alert as they take on water. The women seen shaving their legs from a bucket on deck make the cheeky decision to sale into Fort Lauderdale wearing swimsuits. Birthdays and Christmas are celebrated on board. Depressed when she realizes she cannot win, Tracy sleeps in her captain's chair for the last days of the journey, speaking little, only to be lifted by the welcome of a conquering hero. The film's score by Rob Manning and Samuel Sim beautifully complements every emotion without ever feeling manipulative. The woman who poo poos the concept of feminism before she begins the race embraces it wholeheartedly by the end of it. Tracy Edwards and her crew accomplished something quite magnificent and Alex Holmes has done that feat proud. Grade: