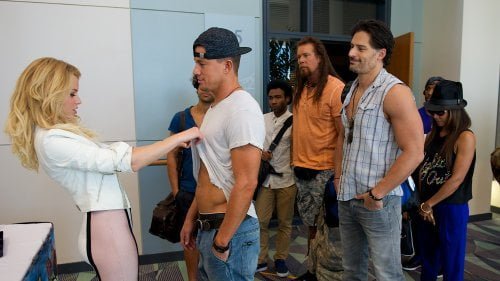 Three years after starting his custom furniture business, Mike Lane (Channing Tatum) gets a call from the Kings of Tampa, luring him back under false pretenses. But once he's there, Mike feels the need to break out the old moves and agrees to join the guys for one last big blowout at Myrtle Beach's annual stripper convention in "Magic Mike XXL."

While Steven Soderbergh still produces, shoots and edits, for this outing he's handed the directorial reins over to his long time first AD Gregory Jacobs. What is puzzling is that neither of them called out screenwriter Reid Carolin ("Magic Mike," "22 Jump Street") for utterly failing to do his job. The film, a road trip movie, might as well have been scriptless as it meanders on its road to nowhere (dramatically speaking). Instead of being treated to Tatum's incredible dancing, we're bludgeoned with simulated sex acts and American Idol auditions, the only set pieces of note both having appeared in the film's trailer. Tatum's promotional events have been far more entertaining than the movie he's been shilling. With Dallas haven taken 'the kid' off to Europe, Big Dick Richie (Joe Manganiello), Tarzan (Kevin Nash), Ken (Matt Bomer) and Tito (Adam Rodriguez) plan on using Tobias (Gabriel Iglesias) as their new MC, but after an obligatory stop at Mad Mary's drag queen bar and Richie's impromptu number at a gas station, an accident sidelines their MC. Mike decides to look up an ex, Rome (Jada Pinkett Smith), in Savannah to fill in and the lads get an eyeful at her revolutionary subscription club Domina where women gather to gawp at and play with Malik ("Step Up Revolution's" Stephen Boss), Augustus (former NFLer Michael Strahan) and crooner Andre ("Dope" joke Donald Glover, TV's 'Community'). Their next stop brings them to the old money manse of Southern belle Nancy (Andie MacDowell, "Groundhog Day") where the lads dig into her fancy wine cellar. Mike also finds Zoe (Amber Heard, "Pineapple Express"), the photographer he'd flirted with back on the beach at Mary's, urging her to come and shoot his competition. Everyone's seen Tatum's "Flashdance" homage to his signature song Ginuwine’s 'Pony,' a number he performs for his own entertainment while working in his shop. If only there were more of this. Instead we get doses of his goofy charm in a couple of scenes with Heard. Manganiello caps Tatum's professionalism with his hilarious convenience store clerk dare, but both of these scenes are in the film's early goings and it's seriously downhill from here. The Domina set midsection is distasteful, like an R-rated trip through a seedy bordello rather than the 'celebration' Rome is purportedly creating for her 'queens.' When the boys show up at Myrtle Beach, they're blocked from a spot by Paris (Elizabeth Banks, "Pitch Perfect 2") until she spies Rome, who surprises the lads by showing up and revealing another former attachment of the saphhic variety (both women have been given that unflattering, hard appearance that goes hand in hand with porn). The final big showdown at the convention, where each gets his own number, features Manganiello buckling his audience-plucked volunteer into a sex swing. Talk about a grind. "Magic Mike XXL" is kind of like Soderbergh's "Ocean's Thirteen," a sequel where the cast and crew appear to be having a lot more fun than those of us left to watch their 'work.' This is the second sequel in a week where the love interest who drove the original plot has upped and vanished. Perhaps Mila Kunis ("Ted") and Cody Horn ("Magic Mike") were onto something. Rewatch Tatum's test screening prank rather than wasting your money on this lazy mess. Grade: