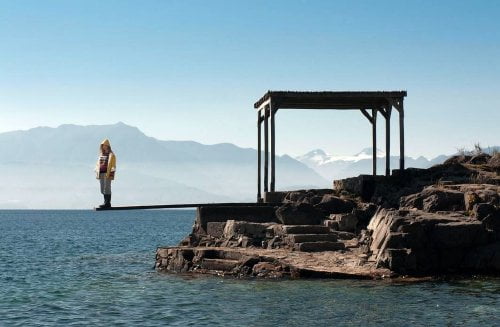 Alicia (Juno Temple, Cera's "Year One" costar) leaves the U.S. for the first time to join her cousin Sarah (Emily Browning, "Sucker Punch"), an exchange student in Chile. On the road to a vacation house with Sarah's boyfriend Agustín (Agustín Silva, "Crystal Fairy"), local xenophobic friend Barbara (Catalina Sandino Moreno, "Maria Full of Grace") and creepy fellow American student Brink (Michael Cera, "This Is the End," "Crystal Fairy"), Sarah receives a phone call calling her back to Santiago. She insists Alicia travel on. Obviously nervous being left with strangers, the young girl's instincts prove right as she descends into a nightmare of "Magic Magic."

Writer/director Sebastián Silva ("The Maid," "Crystal Fairy") made two films with Michael Cera which debuted at the 2013 Sundance film festival and it is a mystery why this one didn't make it into theaters. This Sony Home Entertainment DVD release doesn't have much in the way of extras (a 'making of' featurette), but it's a gem of a film. Unsettling from the get go, Silva never lets up. Influences from Hitchcock to Polanski and "The Texas Chainsaw Massacre" can be seen (the film even bears more than a passing resemblance to Cristian Mungiu's "Beyond the Hills"), yet the film is its own beast. Even the stunning rural lakeside shots (by infamous cinematographer Christopher Doyle "In the Mood for Love" and co-director of photography Glenn Kaplan) which begin the film are eerily cast by the vaguely ominous score. Upon her arrival, Alicia is immediately made to feel unwelcome when her request for a shower after a grueling journey is met with eye rolling (this is a 180 degree turn to the welcoming Chileans of "Crystal Fairy"). On the road Barbara makes disparaging remarks about the 'white people' who have screwed up her country. In a very disturbing scene, two puppies are found by the side of the road, one sick and covered in sores. The group takes alone one, then abandons it when it won't stop whining, a clear metaphor for Alicia who looks out the back window, stricken by their heartlessness. When they motorboat across the lake the motor squeals like the pup's yips. And Alicia accidentally drops one of Barbara's bags into the drink. With no cell reception, Alicia's totally cut off from anything known. Cawing birds and the company's strange behavior keep her up at night. A playful shepherding dog humps her leg. Horses seem to give a strange warning. The effeminate and menacing Brink's passive aggressive behavior rattles her nerves and his fascination with the home's shotgun isn't reassuring. Finally, Sarah returns and although she's concerned about Alicia's state of mind, things get worse (and the fact that it's obvious to everyone but Alicia that her cousin left for an abortion just adds to the creep factor). Sarah's cast as an outsider when she's the only one too afraid to jump into the lake off a high rock (her point of view is distinctly more terrifying than the others'). Then, when shown an animated hypnotism graphic on Agustín's laptop, Alicia begins to respond to Brink's commands, one more outrageous than the next, until she snaps to screaming after placing her hand into the roaring fireplace. Is Alicia being "Gaslight"-ed? Silva keeps us guessing until the bitter end, even after cannily replacing Alicia's POV with that of the group. Temple is utterly convincing as a naive, fearful girl in a den of 'sadists' (only Agustín appears to have any empathy) where even the landscape overwhelms. With the aid of subtle makeup, we see her mental state reflected in her physical appearance. Even better is Cera, who can appear threatening while just standing around. The actor plays psychological warfare as cover for his confused sexual identity, backtracking cruelty with feigned innocence (or is it?). He seems to be taking a page from Matthew McConaughey's recent playbook, but the younger actor has moved faster and found a muse in Silva. Sandino Moreno is cold as ice. Browning balances worry with distraction and Silva provides the only calming factor. The production really serves the material with camera work which makes the ordinary disturbing. Two scenes are edited - one visually, the other aurally - to suggest time shifts and possible delusion. The DVD is presented in its original 2:40:1 widescreen aspect ratio. The making of featurette gives a good feel for how Silva works with his actors and we learn that Cera, who speaks Spanish frequently in the film, lived with the director's family for three months in his absence. Doyle cavorts about in what looks like a bathrobe.