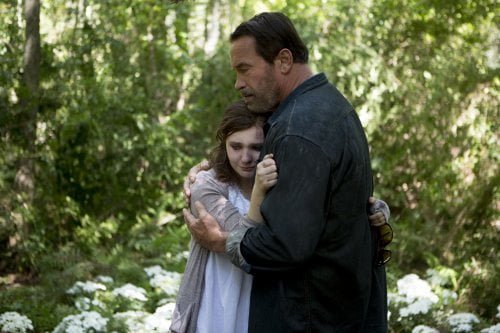 When his 16 year-old daughter from his first marriage is infected with the necroambulent virus which has swept across the country and runs away, farmer Wade Vogel (Arnold Schwarzenegger) spends two weeks looking for her. He is intent on protecting her for the last weeks before she 'turns,' and will struggle with the three only options he has for "Maggie."

At 68, Arnold Schwarzenegger makes his first foray into independent film, so taken by John Scott 3's Black List script that he decided not only to star, but produce. If you think you've over-indulged in all things zombie of late, think again as "Maggie" is something different, a drama that is more about a father's grief, the societal implications of a disease that instills fear among the healthy (think AIDS in the early '80's') and how we cling to our humanity when facing a black void. The movie begins with a collage of sounds and images, a phone call from Maggie (Abigail Breslin, "Zombieland"), Wade driving by a trashed city, an explanation that a person's sense of smell becomes elevated before 'the turn,' Maggie's arrest as a curfew breaker, flashes of a Nosferatu-like infected person attacking, Wade wandering the halls of a hospital filled with people in various states of decay. Once reconnected, Wade and Maggie, who wears sunglasses to shield her milky eyes, stop at an abandoned gas station, the only sound that of a dog barking in distress (neither checks on the animal, more disturbing than the turned owner Wade finds in the men's room). Back on the farm, Maggie is greeted with curiosity and acceptance by her much younger stepbrother Bobby (Aiden Flowers, 'The Originals'' young Klaus) and stepsister Molly (Carsen Flowers) while her dad's second wife, the deeply religious Caroline (Joely Richardson, 2011's "The Girl with the Dragon Tattoo"), wrestles between love and protection of her own, driving a wedge between her and her husband. In one tensely edited scene, Caroline chops a tomato at the kitchen window as we watch Maggie on a swing outside. Suddenly she's gone and Caroline runs out to find the girl crumpled on the ground, a finger twisted at a nasty angle. After making the foreshadowed corrective, Maggie runs outside and when Wade finds her, he also finds the neighbor's husband and child, kept too long by their wife and mother Bonnie, his potential fate needing to be dealt with for another. Movie title sequence designer Henry Hobson makes his directing debut here, alternating long, languid character moments with interactions outside the Vogel family which provide exposition. Local cops appear to check in on Maggie, but as Wade counts Sheriff Ray (Douglas M. Griffin, "Dallas Buyers Club," 2013's "Oldboy") among his friends, he's given wider berth. Ray's daughter Allie (Raeden Greer, 2013's "The Host") visits and convinces Maggie to join a group of kids which will include the infected Trent (Bryce Romero, "The Maze Runner," "Hot Pursuit"). Trent's dad is also a cop, Holt (J.D. Evermore, "Dallas Buyers Club," "Wild"), and so he tells the group just what happens when it is time for Quarantine, a sanitized term for a living hell. Wade does not hear these details from the family doctor (Jodie Moore, 2013's "Oldboy"), but the sympathetic medic tells him he has only three choices, the hardest of which will be the kindest. The screenplay takes BBCA's 'In the Flesh' concept, in which the undead can be 'maintained' within a divided society of the living, and removes any trace of hope. Schwarzenegger gives a quiet, pained performance, his accent more muted than its ever been on screen, conveying that with Maggie, he not only loses a daughter but the last vestige of his late wife. Breslin also forgoes hysterics for a more muted panic as her symptoms ramp up, from physical horrors (a lone scene in a bathroom is horrific) to a dread filled blackout (involving a symbolic fox). Richardson has perhaps the toughest role, her stepmother truly caring for her husband's daughter but damned that those she must protect are also her own. It is she who shares Breslin's two scariest moments on screen, showing an inner strength that Wade is too grief stricken to see. Hobson's made some strong directorial choices, although his use of desaturated color, while we can see what he's going for, is dated and draws too much attention to itself. Musical choices include somber piano chords, muted violin and the gong of a kettledrum. A thunderclap may be a cliched horror convention, but Hobson uses one to great effect. While the film's pacing is a bit deliberate, Hobson delivers a stunning conclusion, one which upends expectations. With its imagined horrors, "Maggie" celebrates life. Grade: