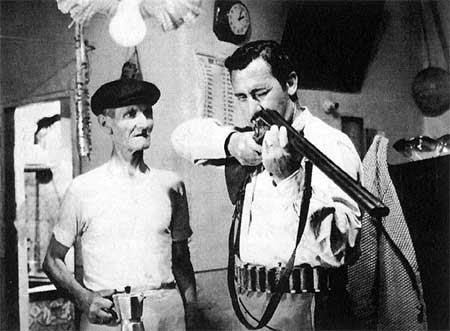 Scooter manufacturing plant supervisor Nino Badalamenti (Alberto Sordi, "I, Vitelloni") is beside himself over his two week vacation in Sicily where his northern wife and their two blond daughters will meet his family for the first time. Before he goes, his boss gives him a package for Don Vincenzo (Ugo Attanasio), a man Nino remembers with great affection, but the message it delivers makes Nino the prime target for a favor for the Don and Badalamenti finds himself a cog in the wheel of the "Mafioso."

'You can take the man out of Sicily....' Rialto Pictures ("Army of Shadows") once again proves their genius at resurrecting films from the past, often little known, and shining a well deserved light on them with theatrical rerelease. This 1962 film is a marvel, a piece before its time that is incredibly funny while delivering a gut punch of a morality drama. Nino is a hyper bundle of energy rushing his vaguely sarcastic beauty of a wife and two cherubic daughters to the train. When they board the ferry for their final destination, Marta (Norma Bengell, "Eros") voices a fear of Italy vanishing behind her, a strange comment that proves highly perceptive. Nino's extended family proves comedic gold. There are the black clad crones whom Nino cannot tell apart and who view his wife with suspicion and a mustachioed sister, Rosalia (Gabriella Conti). They are greeted with a family banquet that overpowers the stylish Marta who struggles with her pound of grilled swordfish only to discover that the third course was a mere appetizer. The home provides little privacy and the special silver bed they are given houses a live chicken underneath. The ebullient Nino revels in his friends and family and lies to both Marta and his parents to keep the peace between them, but Marta becomes the toast of the house after she introduces Rosalia to hot wax treatments and reveals the beauty beneath the beard. But as Marta finally learns to love her husband's homeland, he himself is plunged into its underbelly and Sicilian secrets he's been too sunny to recognize. Director Alberto Lattuada does an adept tightrope walk, slowing twisting dazzling comedy into deeper and darker depths. He signals his audience as to what's coming, but never shows his real hand. Nino's fairground shooting gallery tryout still plays comically due to the character's complete naivety, but by the time Don Vincenzo insinuates his request ('You can say no'), Lattuada's smoothly switched gears. "Mafioso" is a film that seems very ahead of its time with its stereotypical Italian peasant humor and moral and societal commentary. One can easily see it as precursor to Coppola's Godfather films, Nino's innocence corrupted akin to Mike's. Alberto Sordi is just brilliant as Nino, as unbridled as a puppy at film's beginning, a whipped dog by film's end. Technically the film is first rate as well, its bleached out black and whites suggesting the blazing sun. Cinematographer Armando Nannuzzi is great at suggesting extreme contrast - the leisurely happy journey against the stressful rushed one or the same workplace housing the same, but very changed man. "Mafioso" makes one wonder just how many other great, undiscovered films are out there and once again "Rialto Pictures" has released one of the best old films I had never heard of. Bravo.