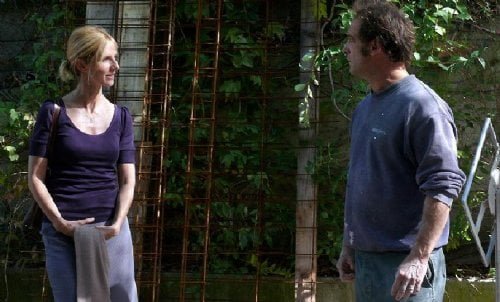 Jean (Vincent Lindon, "La Moustache," "Those Who Remain") is a happily married mason living in a provincial French town with his wife Anne-Marie (Aure Atika, "OSS 117: Cairo, Nest of Spies," "48 Hours a Day") and his young son Jérémy (Arthur Le Houérou). He takes tender care of his elderly father (Jean-Marc Thibault) who lives in a retirement home. But when he picks his son up at school one day, he finds himself irresistibly drawn to his teacher, "Mademoiselle Chambon."

Writer/director Stéphane Brizé has made a slow moving bittersweet romance that relies on long, dialogue free takes of Jean and Anne-Marie's everyday lives juxtaposed with long, almost dialogue free takes of Jean and Véronique Chambon (Sandrine Kiberlain, "Après vous...," Lindon's ex-wife) awkwardly stealing glances at one another or Jean watching transfixed as she plays her violin. Unfortunately, the whole exercise ends up coming off as a not very good chick flick for men. Brizé adapted the story from an Eric Holder novel and it is stuffed to the gills with stereotypes. The strong, silent, macho guy, under-educated but caring of his family, yearning for the refined intellectual who is estranged from hers. It is telling that throughout the film I kept recalling the 1979 Australian film "Tim," in which the middle aged Piper Laurie ends up with her mentally challenged gardener played by Mel Gibson. Lindon is usually a fine actor, but here his longing looks are shot by Brizé to shine light into his eyes as his thin-lipped muzzle reflects the beginnings of a sad smile. There is no chemistry between Lindon and Kiberlain and Aure Atika exudes a lot more sex appeal. When Brizé settles on Jean, his point appears to be the numbing repetition of blue collar life. We watch for minutes on end as Jean jackhammers, as Jean carries rocks, as Jean sledgehammers down a wall. His wife continually makes the same set of moves at her job in a print shop. Even when Jean visits his father, he is seen washing his feet, again a series of repeated motions. The admiring Jean returns to Mademoiselle's class room and tells her he once saw her perform on TV and asks her to play again, she goes all shy. Then she asks him to substitute for a father who can no longer come to class on career day. Jean protests that he is in construction, but Chambon says the class will be interested. When he appears, she writes 'macon' on the board, elevating him above the laborer he truly is. He radiates self esteem and conveys some upon his son, throwing in 'Jérémy already knows this' before an explanation. The scene smacks of condescension, not from father to son but from teacher to father. After Jean replaces a window in Chambon's apartment, she tells him how wonderful it is but that she may not enjoy it much longer as her teaching position moves each year. They awkwardly listen to a CD together and end up in a kiss. Later, she arrives at his site to tell him that she has been offered a position in the town to replace a retiring teacher. When he does not respond, she feels rebuffed and turns the position down. The most serious communications occur with no words here. Jean convinces Chambon to play at his father's birthday party and Anne-Marie traces her husband's look to Véronique as she performs and understands all, not a stereotype, but a cliche (Atika does well with nonetheless). Will Jean leave with Chambon as he has told her he would? The answer is not surprising. Brizé's film has been praised for its wordless exchanges and strong emotions but although it has been prettily photographed, none of that emotion comes through. "Mademoiselle Chambon" relies on a score jacked up to silent movie pitch for its final scene, becoming almost comical as a result. The film is off key from start to finish.