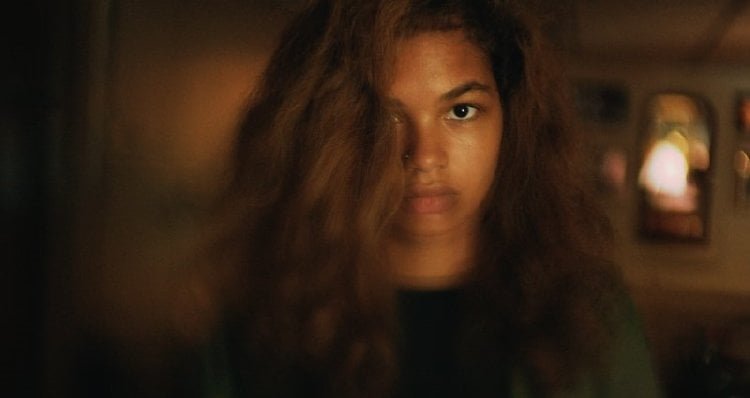 When a teenaged, mentally ill biracial actress suddenly finds herself caught between the mother (Miranda July) she has a fraught relationship with and the experimental theater director (Molly Parker) who not only wants her to star in her play but wishes she were her own daughter, the only path left for her is to find "Madeline's Madeline."

Writer/director Josephine Decker's experimental film came together much like her end result, a workshopped musical developed from real life experience (hers and Helena Howard's, the young actress she discovered at a NJ teen arts festival). While the film won't be for those who like their narratives neatly laid out, those willing to experience something different are in for a compelling tug of war and outstanding performance from newcomer Howard. 'You are not the cat. You are inside the cat.' we hear as Madeline purrs, her feline moves modeled after her pet's. She will swim by the sea in a sea turtle costume and rage on a NYC street in a pig mask. Theater director Evangeline tells her students that the pendulum of the mind does not swing between true and false but between sense and nonsense. 'Duck and drive!' Madeline instructs her mother, come to pick her up. Seeing her daughter as a victim, Regina talks to Madeline about the other kids picking on her. Madeline is angry, the kids merely scattering after a prank mooning Evangeline. We can feel the tension between mother and daughter, unsure how much of Madeline's rage is warranted. When some neighborhood boys ask Madeline if there are bodies in her basement, she invites them to look. They end up watching porn and when Regina finds them, she freaks out. Madeline responds by pulling a lock of hair out of Regina's scalp. Evangeline offers the maternal encouragement Madeline craves, but when she gives the girl an assignment to use her own life, while Madeline's performance stuns the company with its veracity, their director's decision to build their play around her is controversial. Evangeline, whose own pregnancy has thrown Madeline for a loop, even brings Regina into the work, eventually setting off a lockout revolt where the troupe performs as their director pounds on the door. The film has been designed from the perspective of a mental illness which is never defined, cinematographer Ashley Connor's (Decker's "Butter on the Latch") camera going in and out of focus, weaving in close to the action then out for exterior scenes. The film's sound design is its match, voices and chorales layered in among the dialogue, the film set to the beat of the 'Hey nah nah, hey nonni nooni nah' of the troupe's tribal chant. Decker's film is like an expansion on the ideas of Anna Rose Holmer's "The Fits," more experimental yet less narratively clear. Parker and a cast-against-type July are fine in their competing roles, but Howard is a true revelation. Grade: