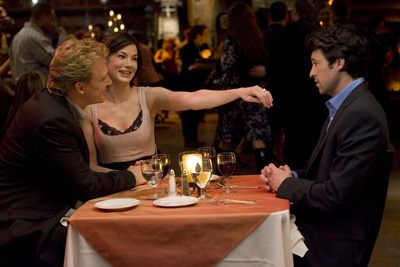 Tom (Patrick Dempsey, TV's 'Grey's Anatomy,' "Enchanted") has the perfect bachelor life and can always count on his best friend Hannah (Michelle Monaghan, "Gone Baby Gone," "The Heartbreak Kid"), but when she leaves for an extended business trip to Scotland he misses her so much he resolves to ask her to marry him on return. He's shocked, then, when she comes home and asks him to stand up for her when she marries wealthy Scottish businessman Colin (Kevin McKidd, HBO's "Rome"). Tom needs to figure out if he is "Made of Honor."

It doesn't take a genius to recognize first time writer Adam Sztykiel's screenplay as "My Best Friend's Wedding" with the sexes reversed but "Made of Honor" gets almost everything wrong, from resisting "Best Friend's" resistance to a too neat 'happily ever after' wrap to ickily lewd comedy over the romantic variety. Only Michelle Monaghan's innate likability and stunning Scottish locations keep "Made of Honor" from sinking like a stone. Tom has become wildly wealthy from having invented the coffee 'collar,' those cardboard cuffs that keep one from scalding oneself when holding a hot cup of joe. (If his claims that he receives ten cents for each one sold are to be believed, Tom apparently is the culprit responsible for the five dollar cup of coffee.) Tom sees Hannah religiously each Sunday when they do perfect couple things like ordering food for each other and crawling through antique marts. The rest of the time he juggles women via his rules (no 'back to backs,' no more than two dates in one week) and plays b'ball with his buds. Hannah's trip has Tom pining away and finally ready to commit, but she returns with the perfect man in Colin, a well hung Scottish Duke who can slam dunk. As Hannah's 'maid' of honor, Tom must contend with bridesmaid cousin Melissa (Busy Philipps, TV's "Freaks and Geeks"), one of his dumpees, while working from the inside to prevent the wedding. The action moves to Scotland for the wedding, where Tom is overcome during Highland Games in which all the spectators wear - renaissance costumes? Considering that the filmmakers make Dempsey look believably young in a college dorm flashback, he spends the rest of the movie looking too old and worn for the fresh faced Monaghan. So it's hard not to side with the stalwart Colin, engagingly if somewhat stiffly portrayed by McKidd who provides this film's version of the singalong. ('Have you met Colin?' asks a bridesmaid of Dempsey - 'Isn't he dreamy?') Handed some objectionable material, Sidney Pollack is still likable as Tom's dad and Kathleen Quinlan ("Breach") projects concern as Hannah's intuitive mom. Emily Nelson is perky as a plus size bridesmaid determined to wear a size eight gown. But the film's brought down with its disturbingly low humor. Tom meets Hannah in college when he mistakenly crawls into her dorm room bed wearing a Bill Clinton mask thinking she's her Monica wannabe roommate and that's about as wholesome as the sex jokes get. We're first introduced to Hannah in her present day job as an art restorer, kneeling before a nude while bobbing her head. If that isn't distasteful enough, Tom's dad is negotiating his pre-nup ten minutes before his sixth wedding and the debate is over how many times a week he is entitled to sex - could he be more up front about paying for it? Then there's the sex toy saleswoman mistakenly invited to Hannah's shower who provides the glow-in-the-dark thunder beads Hannah's grandmother wears as a necklace throughout the rest of the film. How romantic! "Made of Honor" is utterly generic and predictable and its humor often of questionable taste. It does work as a Scottish travelogue. Monaghan can surely weather this one, but Dempsey gets demerits after the far better "Enchanted."