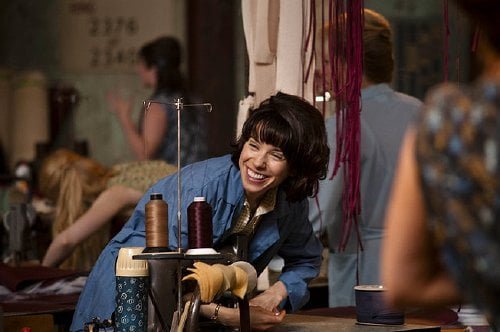 In 1968, the women workers at the Ford plant in Dagenham, England were paid half of what their male co-workers made doing the same job. When their union officials agree with Ford executives that the ladies should be deemed unskilled, not semi-skilled, workers, they join forces to strike against their corporate bosses and demand equal pay for equal work in “Made in Dagenham.”

In the 1960's, the 187 women who worked at Ford, Britain's largest car manufacturer, voted for a new grading system. They were shocked to discover that their work, assembling car upholstery, was newly classified as 'unskilled,' a move that would keep their pay well below any of the 55,000 men who worked there. Union representative Albert Passingham (Bob Hoskins, "The Long Good Friday," "Mrs Henderson Presents"), who was brought up by a single mother working multiple, low paying jobs, encouraged the plucky Rita O'Grady (Sally Hawkins, "Happy-Go-Lucky," "Never Let Me Go") to join a meeting with company execs about a possible work stoppage. Rita surprised herself and just about everyone else when her demands for equal pay made history in "Made in Dagenham." This inspiring drama about the power of one voice is as meat and potatoes as its blue collar subjects. As written by William Ivory ("The Closer You Get") and directed by Nigel Cole ("Calendar Girls," "A Lot Like Love"), this little known (at least to U.S. audiences) piece of history is a solid David and Goliath tale with shades of class snobbery, the war of the sexes and generational clash in post-war Britain. Hawkins keeps the whole centered, although the role isn't as much of a creative challenge as her happy-go-lucky Poppy. The thirty year-old "Norma Rae" is still the gold standard for the subject. Working in sweatshop conditions, Ford's women often stripped down to bra and panties to work, keeping many of the menfolk at bay. Their cheery camaraderie belie their conditions, but once Rita and shop steward Connie (Geraldine James, "Sherlock Holmes," "Alice in Wonderland") report back from their meeting with Peter Hopkins (Rupert Graves, "Mrs. Dalloway," "Death at a Funeral") and their less-than-supportive Union head Monty Taylor (Kenneth Cranham, "Hot Fuzz," "Valkyrie"), they take a new view of things. Soon they're out picketing, receiving free veg from saucy Brenda's (Andrea Riseborough, "Happy-Go-Lucky," "Never Let Me Go") latest boyfriend and pep talks from the admiring Albert. Rita begins to travel to other British cities to get the word out and she catches the attention of Secretary of State for Employment and Productivity Barbara Castle (Miranda Richardson, "The Young Victoria," TV's 'Rubicon'), but when the backlog of Dagenham's upholstery runs out, the entire factory shuts down, putting the men out of work. Most of them, including Rita's husband Eddie (Daniel Mays, "Vera Drake," "Nanny McPhee Returns"), don't find the women's strike as cute or easy to support anymore. "Made in Dagenham" plays much as Hollywood would have made it. Most of the women are attractive and only a few make it as individuals. There is strife between Rita and Connie when Connie's convinced by Rita to attend an out of town meeting only to return home to tragedy. There is no strife when Ford tries to break the strike by luring Sandra (Jaime Winstone, "Donkey Punch," TV's "Dead Set"), the pretty blonde who introduces Mary Quant hot pants to the manufacturing plant, to work as a brochure model. Rita makes it to the shoot in the nick of time and Sandra's moral compass points correctly. There's a nice parallel between Rita and Lisa Hopkins (Rosamund Pike, "An Education"), the Cambridge educated wife of Peter and a teacher at the school Rita's kids go to, but there's slippage with Albert's character who simply fades away as the story ramps up. Castle is awkwardly inserted into the film at varying points so her role during the film's climax is predefined. Hawkins plays Rita simply. She's initially shy about speaking up, but once she's in Albert's meeting she doesn't stop, despite Monty's admonitions. Hawkins goes all in, brusquely expecting support from husband, giving him a telling off when he wants a gold star. James makes Connie so meek and subdued you wonder how she was elected shop steward. Riseborough provides the brassy comedy. Best of support is actually Pike who only appears in three scenes but makes each, especially the last, count. "Made in Dagenham" is a good film about an interesting piece of feminist history, but overall it plays a bit too refined for the way it probably really went down.

Sally Hawkins plays energetic Ford worker Rita O’Grady who becomes the de facto leader in a work stoppage by the woman at the Dagenham plant. It is an earnest role in an earnest film that fictionalizes the true events that ultimately led to equal pay for British women. Hawkins anchors the working class ladies as they rise, as one, against the chauvinistic treatment by Ford executives. Its heart is in the right place but the telling of this inspirational story falls flat. Director Nigel Cole, who brought us the cute and fluffy “Calendar Girls,” trades in cute for serious with a screenplay by William Ivory. The result is a rah-rah ladies-feel-good-about-yourselves flick. It is telling when a major character – in this case, Bob Hoskins as Albert Passing, the union representative who is sympathetic and supportive of the women’s cause – disappears from the story at the halfway mark without explanation. This is a real problem as Passingham is the main influence on the ladies’ decision to fight the Man for what is right and just. At about the time Albert vanishes from the scene, though, he is replaced by Miranda Richardson as British First Secretary of State Barbara Castle, the self-proclaimed “feisty redhead” who comes to champion the strikers’ cause. The actress helps fill the vacuum created when Passingham disappears but his is a loose end that is one of the things that unravels “Made in Dagenham.” Rosamund Pike is solid as Lisa Hopkins, the wife of a senior Ford exec who also supports Rita and the rest of strikers – much against her husband’s will. The strong female empowerment sentiment of “Made in Dagenham” will appeal to the feminist audience that it so squarely aims for. It is also a mild education in British labor history and gives a fair period look to late 1960s England. The story, though, is clichéd (I kept on thinking of the far superior “Norma Ray” through the entirety of “Made”) and weakens the film.