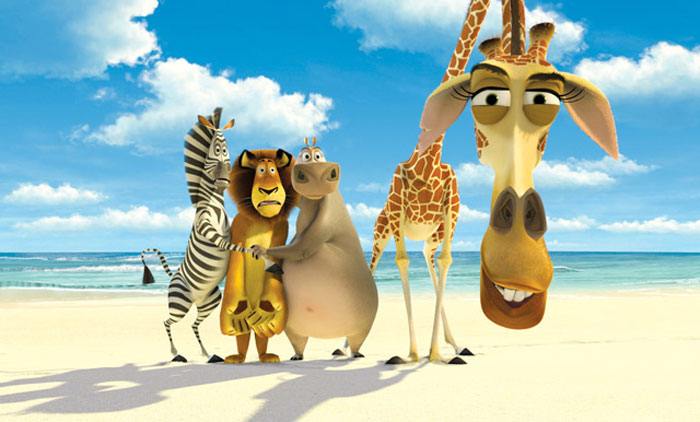 Marty the Zebra (voice of Chris Rock) has lived the easy life for 10 years as a main attraction at the Central Park Zoo. But, what he wants most is to go to the mythical “wild,” a place he believes to be somewhere near Connecticut, and sets out one night to find it. When his best friends, Alex the Lion (voice of Ben Stiller), Gloria the Hippopotamus (voice of Jada Pinkett Smith) and Melman the Giraffe (voice of David Schwimmer), learn of Marty’s disappearance, they decide to intervene and bring their black and white striped friend home. Instead, the quartet triggers a movement to return all the zoo’s animals to the wild and they end up in “Madagascar.”

Alex the Lion (Ben Stiller, "Meet the Fockers"), king of the Central Park Zoo, does everything he can to make his best friend Marty the Zebra's (Chris Rock, "The Longest Yard") birthday special, but Marty yearns for something more. When four penguins surface in Marty's pen while digging their way out of the zoo, Marty becomes determined to escape to the wild as well. An aborted attempt to board a train in Grand Central Station convinces zoo humans that Marty and his friends Alex, Melman the Giraffe (David Schwimmer, TV's "Friends," "Band of Brothers") and Gloria the Hippo (Jada Pinkett Smith, "The Matrix: Revolutions") would be happier elsewhere, but those pesky penguins hijack their ship and the crated foursome end up shipwrecked on "Madagascar." Directors Eric Darnell ("Antz") and Tom McGrath and TV series writer Mark Burton and Billy Frolick deliver a cute computer animation that helps erase the bad taste of Dreamworks' last entry, "Shark Tale," while not exactly whetting the appetite for their next. "Madagascar" starts with a fun premise and amusing characters then runs out of gas. Still, it's entertaining enough and should keep parents amused and kiddies delighted. If there's a message here, it is that nature is brutal and one should think about the source of one's steak. The film's opening sequence is a beaut. As the theme from 'Born Free' plays (one of many movie themes used, among them "New York, New York," "Saturday Night Fever" and "Chariots of Fire"), a zebra gallops across a perfect veldt and performs increasingly difficult acrobatic maneuvers until he's stopped dead by a lion. Alex has interrupted Marty's morning workout on his treadmill, which faces an African grassland mural. Of the four friends, three are quite content with their lot. Alex is attached to his perfectly served up steaks, his heat lamp and the gift shop memorabilia bearing his likeness. Gloria loves her massages and fruit salads. Melman is a hypochondriac soothed by his medications and numerous doctor appointments (a very funny concept abandoned by the screenwriters in the film's second half). The plotting penguins, boss-man Skipper (director McGrath), big guy Kowalski (Chris Miller, "Shrek's" Magic Mirror), puny Private (Christopher Knights, "Shrek 2's" Three Blind Mice) and silent henchman Rico, steal the film hijacking the ship and performing a mid-ocean U-turn towards Antarctica (don't worry - they reappear after learning their destination wasn't what they dreamed of either). Meanwhile the four main characters wash ashore and are welcomed by the hilariously inept King of the Lemurs, Julian (Sacha Baron Cohen, UK TV's Ali G), who is impressed when Alex scares off his tribe's natural enemies, the Hoosa. After a few days without steak delivery, though, Alex begins to revert to his beast within and even his friends are at stake. "Madagascar's" script is far less annoyingly pop-referential than "Shark Tale's," instead going back to the well of classic 2-D animation exaggeration (a little old lady who batters Alex could be related to Tweety's owner). Humor related to the animals'' characteristics, like monkeys' proclivity to throw poo, should have been further developed - Marty's constant musing as to whether he is white with black stripes or the opposite seems like a weak attempt to play off his voice actor's race (and makes no sense given the zebra's underbelly is white anyway). Consistently, the supporting players - the monkeys, the penguins, the lemurs, get the best jokes (the lemurs are introduced having a rave to Real2Reel's "I like to move it, move it"). Starring vocals are serviceable. Cohen is the goofy standout and Andy Richter ("New York Minute," "Elf") is aided by the cartoonists' rendering of his mouse lemur. In one small scene, David Cowgill adds heaps of flavor voicing a NYC police horse Marty stops for directions. Animation is OK - Alex's nose looks nice and velvety and Marty's snout looks good, but everything else looks rubbery and landscapes tend to be muddy. "Madagascar" is middlin' cute.

I had the opportunity, a while back, to see a work-in-progress showing of the first 45 minutes of Madagascar” and was so amused I was eager to see the completed movie. The humorous story of friendship and loyalty of the four four-footed amigos is interleaved with a Great Escape-type yarn about a gang of militant penguins trying to get to Antarctica. With this as the setting for Dreamworks’ latest foray into computer-generated animation, it looked like it could only get better. Unfortunately, “Madagascar” loses steam and imagination at the halfway mark and what had been such a good start slips into unsatisfying mediocrity. Truth be told, when Marty, Alex, Gloria and Melman talk about going to the wild, it is more interesting than when they actually get to there. The scenes in New York City – from Central Park to Times Square to Grand Central Station – are the best in the flick and give it a lot of energy. When they finally land in Madagascar and meet a colony of lemurs (amusingly led by King Julian (voice of Sacha Baron Cohen)) things become merely routine. Madagascar” fails to create the lovable characters of such classic animations as “Beauty and the Beast” (one of the first animated films to utilize CGI, if only briefly), “Toy Story” and, even, Dreamworks own Shrek.” Instead, Marty, Alex, Gloria and Melman are TV-cartoon level characters, at best. It doesn’t bode well when the secondary critters are more compelling and fun than the leads. The penguins, in particular, steal the show whenever they are on screen. Skipper (voice of Tom McGrath), Private (voice of Christopher Knights), Kowalski (voice of Chris Miller) and mute Rico are a riot of resourcefulness as they take charge in their mission to get to Antarctica. Also amusing are Willie (voice of Code Cameron) and also-mute Phil, a pair of philosophizing chimpanzees that take poo-throwing to lofty, intellectual heights. Dreamworks Animation has been vying for the title of king of CGI against Disney/Pixar and, to date, has yet to outclass that team – though this may soon change now that the animation giant, Disney, and Pixar have parted ways. The computer-generated imagery of Madagascar” is clever enough, in a Chuck Jones/Tex Avery kind of way, with the cartoon stretch and squish of the characters used to good comic effect. But, the mastery of detail that is always present in Pixar’s animation isn’t present here. Ever since Dreamworks first foray into GCI anime with “Antz,” I’ve always noted an almost murky quality with the background art in all of their animations. “Madagascar” does it better but does not reach the level of such works as The Incredibles.” There is enough action and cute characters to keep the young youngsters happy while watching “Madagascar” and it should do well in the after market as a video babysitter. It doesn’t have enough mature humor to satisfy older kids and adults and seems long even at under-90 minutes. The promise of the first half is not met in the second.