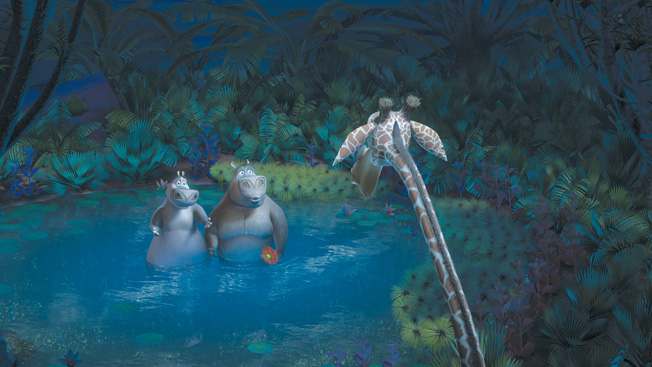 It has been three years since Alex the Lion (Ben Stiller), Marty the Zebra (Chris Rock), Melman the Giraffe (David Schwimmer) and Gloria the Hippo (Jada Pinkett Smith) landed on the island of Madagascar. They want to return to their home at the Bronx Zoo, but how to get there? They enlist the help of King Julian (Sacha Baron Cohen) and his minions to help them on their way in “Madagascar: Escape 2 Africa.”

When the original “Madagascar” came out in 2005, the youngsters were thrilled and, thanks to the devious and funny gang of penguins, it kept the adults amused, too. The follow up to the children’s hit represents a leap forth technically but story-wise it will appeal only to its little kid audience. When they take off in a makeshift airplane to go home and it falls far short of their destination, the gaggle of travelers finds themselves in a land where there are herds of animals just like them. In fact, Alex soon learns that he is with not only his kindred kind, he reunites with his mother (Sherri Shepherd) and father, Suba (the late Bernie Mac), the pride’s alpha-leader. However, an ambitious contender to the throne, Makunga (Alec Baldwin), convinces Suba that his son must go through the required right of passage. The conniving usurper sends in a ringer, the enormously strong but none-too-bright Moto Moto (Will I Am) to make sure Alex loses. He does and the young lion is banished from his family and friends. A crisis ensues when some disgruntled humans dam up the stream that is the only source of water for all of the creatures in this part of the African savannah. Alex and his friends vow to save the day and head off on the dangerous mission to destroy the dam and protect their new friends, All the while, we are subjected to cutesy song and dance numbers (remember “I want to move it, move it!” from the first) all aimed at entertaining the kids that will see “Madagascar 2” in theaters and on DVD. The four-year olds out their will love the funny animals, music and flashy animation. Unfortunately, I am not a four-year old and I spent the time while watching the film ­ and checking my watch frequently. Yes, the penguins are there but in no way as politically incorrect and funny as they were in the first. The techs are great but the story fails to have anything for adults, except for the parents of said four-year olds.