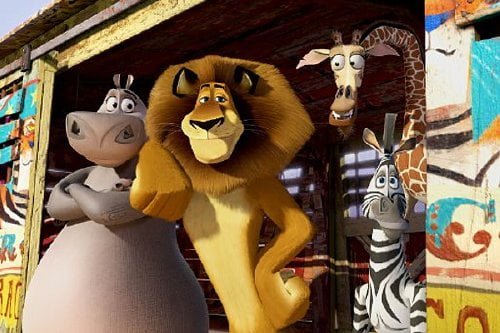 Intent on returning to their home in New York, Alex (voice of Ben Stiller), Marty (voice of Chris Rock), Melman (voice of David Schwimmer) and Gloria (voice of Jada Pinkett Smith) follow the penguins to Monte Carlo where the birds have been using the monkeys, fronting as the elaborately bewigged King of Versailles, to break the casinos. But the foursome make an inelegant entrance, drawing the attention of animal control officer Captain Chantel DuBois (voice of Frances McDormand). Alex leads his pals to take cover in a circus train, but DuBois stays on their scent in "Madagascar 3: Europe's Most Wanted."

Despite Boston area AMC theaters' best attempts to thwart the film going experience (at my screening, the first five minutes of the film was projected without the 3D lens making it virtually unwatchable), "Madagascar 3: Europe's Most Wanted" turns out to be the best of the three. Shot in 3D, it uses the medium to its best advantage and the circus theme allows the animators to go wild with color. But "3's" best assets are its new characters. These include Vitaly (voice of Bryan Cranston), an intimidating Russian tiger who wants nothing to do with Alex and his crew, Stefano (voice of Martin Short), an Italian sea lion wearing a ruff in the colors of his country's flag who's always dreamed of becoming a 'human' cannonball and Gia (voice of Jessica Chastain), a sexy Italian leopard who makes Alex go weak at the knees. Her presence seems to put love in the air for others, as Melman and Gloria's relationship goes to new heights on the high wire and King Julien XIII (voice of Sacha Baron Cohen) has a 'Roman Holiday' with mute tricycle-riding bear Sonya. Above all is DuBois, a cross between Edith Piaf, Gloria Swanson, a buxom prison warden and a bloodhound. McDormand's vocal work is a high wire act of its own. Alex must get to the heart of Vitaly's hostility and discovers a failure in his past, and so Alex decides to rebuild the failing circus Cirque du Soleil style. Marty learns a new passion in trying to help Stefano realize his, King Julien procures a Ducati motorcycle for his lady love and Alex makes up 'trapeze Americano' to impress Gia. The whole enterprise is meant to impress an American promoter (a great stereotypical Texan being fed by the American eagle on his shoulder) to get the gang back home. Screenwriters Eric Darnell ("Madagascar") and Noah Baumbach(!) ("Greenberg") were smart to set the third edition in a traveling circus with multiple locales (from Monte Carlo to Rome to London and eventually back to New York) and a villainous to rival Cruella da Ville (DuBois really only wants Alex to mount his head on her wall along with her mounted puppy). The film really only sputters when it tries to appeal to adult sensibilities. Alex's bit on his specie's ties with the Roman Colosseum fell flat with a packed screening audience and although Frances McDormand does amazingly well covering Edith Piaf's "Non Je Ne Regrette Rien," nobody seemed to get that either. Alex also takes a couple of strange shots at Canada, most egregiously calling them 'drunk on maple syrup and cheap pharmaceuticals,' that made no sense to me - is there something about Canada in Alex's past that I've forgotten? And why would you want to offend an entire country (and audience)? But there are nice touches, too, like a tip of the hat to "Fantasia" when Gloria's seen in a pink tutu. "I Want to Move It" is still featured, but new hits are added to the mix. The triumphant premiere of 'Fur Power' is set to Katy Perry's 'Firework,' although the surreal animation accompanying it rather than a more natural cirus setting feels like a cost-cutting measure. Back in their home city, the four pals view their old home through very different eyes and the visuals are tweaked just enough to realize that - the same, but different. The same could be said for the franchise.