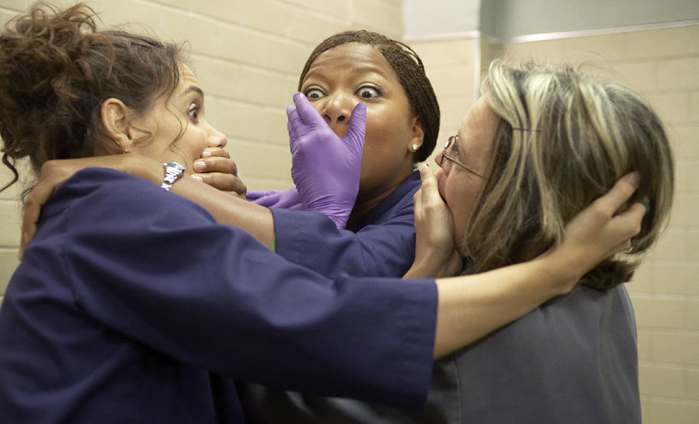 When Bridget Cardigan's (Diane Keaton, "Reds," "Because I Said So") upper middle class lifestyle is threatened after her husband Don (Ted Danson, TV's "Damages") cannot recover from losing a high level management position, she must rely on the housekeeper she can no longer pay to point her towards a job that plays to her skills - a janitorial position at Kansas City's Federal Reserve Bank. Bridget is beside herself watching new coworker Nina Brewster (Queen Latifah, "Hairspray") systematically destroy thousands in worn out bills, but needs a woman with less responsibilities, newlywed trailer dweller Jackie Truman (Katie Holmes, "Wonder Boys," "Thank You for Smoking"), to convince Nina to team up and turn some of that used cash into their own "Mad Money."

From director Callie Khouri("Divine Secrets of the Ya-Ya Sisterhood"), who wrote the classic femme comic crime movie "Thelma & Louise" to her three talented stars, "Mad Money" represents one huge missed opportunity. Keaton, whose choices have been shaky since 1993's "Manhattan Murder Mystery," trots out the patented manic mugging that's been her comedic forte lately, while Holmes's twitchy space cadet mannerisms only succeed in making us see the tabloids' Mrs. Tom Cruise. Queen Latifah is always a warm presence, but usually in subpar material and Khouri has served up a female buddy heist comedy that lays there like a dead fish. The film begins at the presumed end, with each woman trying to dispose of the tattered evidence as the authorities move in. Bridget's industrious husband has a combo shredder-toilet system going and fails to notice she's taken some money and run. Jackie and Bob (Adam Rothenberg, a Danson "Damages" costar) Truman have rigged up their trailer with an elaborate Rube Goldberg explosive system (what anyone would do trying to make a quick escape!) and Nina is shoveling bills into a backyard barbecue to the wonderment of her young son. They're all caught. Three years earlier, we witness Bridget's flailing disbelief at the change in her financial situation and her unlikely hiring as janitorial staff. The odd trio choose a 'go-code,' then elaborately pantomime it in the lunch room, but the first try's a no-go when Jackie has a 'bad feeling.' Turns out she's right when big boss Mr. Glover (Stephen Root, "Office Space," "No Country for Old Men") demands that security guards Barry (Roger Cross “The Chronicles of Riddick,” TV's "24") and Shaun (SNL's Finesse Mitchell) frisk departing employees that day. When they do succeed, single mom Nina is astonished to learn that Bridget intends to keep on stealing. Barry eventually sees something fishy, but, as he's sweet on Nina, he's brought into the fold as well. There is nothing remotely funny or interesting about "Mad Money," the type of flick that coasts on such hoary cliches as people rolling around in cash and throwing it up in the air at every opportunity. Latifah and Cross project enough warmth into their budding romance that one wishes the film had scuttled the heist and focused on them. Writer Glenn Gers ("Fracture"), who used British TV movie "Hot Money" as his springboard, attempts to delve into the aftermath of heist ('Crime is contagious' Bridget informs us), but his characters act too stupidly (Bridget buys a $60,000 diamond ring AND wears it to her cleaning job) to merit the subject any psychological depth. "Mad Money" is a nonsensical and joyless comedy which does nothing to aid the reputation of early year releases. Perhaps it will give some producers with a little of their own mad money a tax write off.