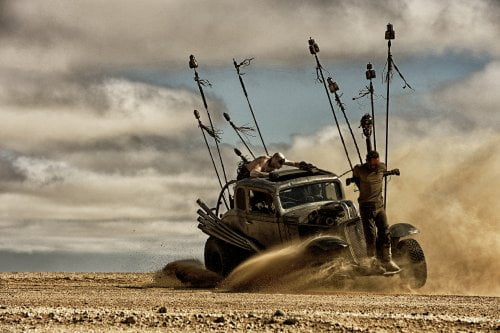 Max Rockatansky (Tom Hardy) has had a tough life. He survived the Apocalypse but lost his wife and child. Things get worse when he is captured by Immortan Joe (Hugh Keays-Byrne), an evil despot who uses Max as a unwilling universal, living donor being drained of his blood. He is saved from certain death when Joe’s trusted lieutenant, Imperator Furiosa (Charlize Theron) betrays her leader in “Mad Max: Fury Road.”

In a post-apocalyptic Wasteland, survival's the only thing on Max Rockatansky's (Tom Hardy, "Locke") mind when it's not being actively haunted by the voices of his late wife and child. That focus is immediately challenged when he becomes the ornamental 'blood bag' on the hood of Nux's (Nicholas Hoult, "Warm Bodies") vehicle, one of many War Boys in hot pursuit of Imperator Furiosa (Charlize Theron), gone AWOL in a War Rig with the breeding brides of Immortan Joe (Hugh Keays-Byrne, "Mad Max's" Toecutter) on a quest to get to the Green Place of her birth in "Mad Max: Fury Road." Thirty years after the release of "Mad Max: Beyond Thunderdome" ended his original trilogy, cowriter (Brendan McCarthy and "Mad Max's Nick Lathouris)/director George Miller shows the young 'uns how it's done with a spectacular reboot of his old franchise. The genius here lies in two things - the inventively visualized world and old school action stunts shot with new technology. Miller's emphasis on the visual does come at a price, though, many details of his story only readable through osmosis. I wasn't surprised to see a comic book author fashioned much of the screenplay. That's not to say "Fury Road" is incoherent. The basic story finds our Man With No Name thrust into tyrannical world of Immortan Joe, who as ruler of the Citadel with its pumped water calls the shots in the Wasteland, including Gas Town, where Furiosa was supposed to be heading, and the Bullet Farm. Hostages like Max (who keeps his name to himself until the very end) are used as blood supplies for The Immortan's War Boys, humanity having been polluted into severely curtailed life spans. This explains The Immortan's need to breed, one son, Rictus Erectus (Nathan Jones, 2011's "Conan the Barbarian"), a bulked up man child, the other, Corpus Colossus (bone brittle disease sufferer Quentin Kenihan), an intellect trapped in a stunted body. Immortan himself is ravaged, the image presented to the public enhanced by Lucite body armor and a mask fiercely festooned with horse teeth. Joe keeps his Boys pumped up with promises of ascending to Valhalla (his made up religion recalls Islamist extremism) and it is a great honor for these tattooed and scarified Boys to have their teeth 'grilled' with silver metallic paint. Furiosa is a Citadel rarity, a woman in a position of power where most are treated as brood mares or milk cows (one wonders why the 'milking room' is full of overweight women in a time of severe food shortages). Her rescue of Joe's five brides - The Splendid Angharad (Rosie Huntington-Whiteley, "Transformers: Dark of the Moon") with child, Toast the Knowing (Zoë Kravitz, "Divergent"), Capable (Riley Keough, "Magic Mike"), The Dag (Abbey Lee) and Cheedo the Fragile (Courtney Eaton) is The Immortan's worst nightmare and he and his allies take pursuit on a massive thundering scale. Max escapes Nux and attempts to make off with Furiosa's rig but is outwitted by her kill switch set up, so the two become wary partners. The first half of "Fury Road" is not unlike Tommy Lee Jones's "The Homesman," with its reluctant hero aiding a woman trying to bring the weaker of her kind across hostile territory. But the film is primarily about crazily crafted vehicles and their equally bedecked drivers barrelling across brilliant orange desert sands attempting to stop the War Rig with explosives, gunfire, tire shredders and brute force dropped in via pole (the Polecats may be the film's most outrageous stunt, men atop arcing poles as high as 30 feet planted on moving vehicles, swiping back and forth across the screen like windshield wipers). This is not the CGI-heavy physics-be-damned world of "Furious 7" but real world practical stunts we are seeing, shot with state-of-the-art camera rigs positioned within the action, edited not to pull the wool over audience eyes with confused chaos but with the intent of showing off what's going on. Roaring vehicles are accentuated with The Immortan's own traveling band, the Doof Warrior (iOTA) and his flaming electric guitar accompanied by a bank of Taiko drummers on the back of his wagon. (Joe's rig includes not one but two 1959 Cadillac Sevilles as elaborate tail fins.) It's a glorious rush of clanking metal fueled by grease and guzzoline. You just might be left trying to figure out just who The People Eater and The Bullet Farmer are in the scheme of things or why Nux so quickly switches allegiances. *This* is how you reboot a franchise. But as good an apocalyptic actioner as "Mad Max: Fury Road" is, "The Road Warrior" is still the gold standard. Grade:

If you loved the action-packed George Miller epic, “Mad Max 2: The Road Warrior (1981)”, then you are going to love the over-action-packed update from the 70-year old director.” The difference, sadly, is that Miller and his co-writers Brendan McCarthy decide to forgo developing a story to hang the copious and bombastic action on. Furiosa is sent on a mission to get the gasoline to fuel the bizarre war wagon concoctions that Miller and his design team imaginatively bring to life. The warrior lady has other plans, though, and diverges from course and takes her war rig and her hidden cargo of Immotan Joe’s beautiful breeding concubines. Joe and his army of battle vehicles take chase, with Max chained to the front of one machine. From here on, I think it is only about 15 minutes into the film, that non-stop chase begins and does not let up until near the end of “Mad Max: Fury Road.” The action sequence is remarkably staged and “Fury Road” is an amazing production feat on all levels. Tom Hardy as the strong-willed man of few words, Max, is first rate as the new road warrior. Charlize Theron is his equal as the smart, resourceful warrior lady, Furiosa. The two start off not trusting each other but they bond over their mutual mission to save the women and find a new life in the Green Place, a long ago memory for Furiosa. The bad guy characters lack the depth that Miller put into his great “Road Warrior” villains, The Humungus (Kjell Nilson) and his badass henchmen. Other characters are incidental to the new “Mad Max” and are mostly fodder to feed the non-stop running battle. For those who like high-voltage post-apocalyptic action flicks, especially those familiar with the old “Mad Max” movies, are going to love the latest reboot. Miller and company, literally, turn up the volume (Joe’s army travels with its own accompaniment – a massive drum platform with crazed guitarist) and crank up the action with hundreds, if not thousands, of explosions as Joe’s armies converge on our heroes. To me, though, the continuing chase with little or no break in the action begins to get monotonous as the film draws to its hopeful conclusion. If the $100000000 production gets the box office gold that the filmmakers expect to earn from this summer tent pole, we can expect more from the aging but plucky George Miller. Although more of the same, without bothering to actually have more than a shell of a story, seems to me to offer diminishing returns. Then again, maybe not, considering the propensity over the last decade to flood the multiplexes with franchise films. I like “Mad Max: Fury Road,” but walked out a bit disappointed – I wanted get my socks knocked off but they were still on my feet as I left the theater..