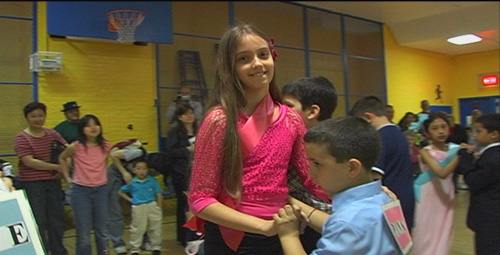 Fifth-graders across the boroughs of New York City, in over 60 public schools, are required to take a 10-week course in ballroom dancing. At the end of the course, each school can choose to take part in the Rainbow Team Matches and compete with the other participating public schools in the Grand Finals. Filmmakers Marilyn Agrelo and Amy Sewell take their cameras into three of these schools as the students train and prepare for the big competition in “Bad Hot Ballroom.”

After writing an article for The Tribeca Trib in 2003 about fifth-graders taking mandatory ballroom dance instruction at school, writer/producer Amy Sewell was frustrated by the limited space she was allowed for what she found to be a fascinating and multi-layered subject. Sewell contacted an acquaintance who produced independent films, Marilyn Agrelo, who makes her directorial debut here. Together the two filmmakers followed three New York City classrooms, chosen for their diversity, to document the kids being plunged into an unusual curriculum and competition in "Mad Hot Ballroom." Unfortunately, while this documentary has a sprinkling of cute 'kids say the darndest things' moments and a few insights into the benefits of this program, the filmmakers have a shaky grasp on differentiating their classrooms, students, teachers and instructors. They also fail to delve into any of its controversial aspects and build no suspense for the final competition. Agrelo and Sewell, along with their editor Sabine Krayenbuehl ("My Architect; A Son’s Journey"), may have benefited from a few more viewings of 2002's spelling bee doc, "Spellbound," to give their film some shape. We're told via intertitles that 6,000 kids in 60 NYC schools required to take a 10 week ballroom dancing course. Three schools are introduced - Washington Heights uptown where most of the kids are from the Dominican Republic living at poverty level in single parent homes, Tribeca downtown where the kids are outspoken and the least resistant to the arts and Bensonhurst in Brooklyn with a large Asian American population. Only one of the school's principals is interviewed in a scene awkwardly inserted in the middle of a bridging sequence. Unfortunately, the school that has the most colorful students doesn't make it past the quarter finals. ('I'm indignant' proclaims a ten-year-old with great passion, in perhaps the film's funniest line.) As if scrambling to add some late-going drama, last year's champs in Queens are introduced late in the game when they should have been held up early as the school to beat. Structurally, this film is a mess. None of the kids are followed in any balanced fashion, often making it difficult to remember which class they belong to. Only at the Tribeca school is the difference between classroom teacher, the prone to tears Allison Sheniak, and ballroom instructor made clear. In the Washington Heights school, the teacher, Yomaira Reynoso, seems to spend more time instructing the kids in dance than the dance instructor. He's Rodney Lopez, who explains how important it is to have a male presence encouraging the boys in this endeavor. Yet the filmmakers never examine the gay influence, which is clearly present, on this program. One Tribeca girl states that it is uncomfortable dancing with Mr. Alex because 'he's so much older,' but again, the sexual dynamics of a blossoming young girl dancing with the bedroom-eyed Russian (who, it should be noted, always acts the utmost professional, as do all the instructors shown) is never addressed, nor is the appropriateness of the common choice of Peggy Lee's "Fever" for fox-trotting ten-year olds. The parents are largely left in the background. Tribeca's Tara, who hilariously thinks she's got the stuff (and she may indeed have), has a dad who picks her up on his motorcycle and Bensonhurst's Mickey, another character, has a mom with a Rocky-themed cellphone ring, but that's about as deep as we get. More interesting are the boy-girl dynamics. It appears that the teachers' biggest challenge is to get the kids to maintain eye contact. A bunch of Washington Heights boys tell us that 'Girls always think they're the boss of everything and that they're the best,' while several girls complain about lazy partners who need to be led. A much admired, long-haired girl is talked about by the boys, but never identified by the filmmakers. We're told that one young girl has changed from a problematic rebel to a responsible young lady, but we aren't actually shown this transition, even though the girl in question has been one of the more identifiable kids throughout. There's no real suspense in the final competition, which the filmmakers indulge with way too much footage. Director of photography Claudia Raschke-Robinson gets cameras moving among the dancing couples, causing one to wonder how much the competition was compromised by their presence. "Mad Hot Ballroom" is a frustratingly haphazard look at intriguing subject matter that is blessed with the personalities - Tara, Emma, Cyrus, Mickey and Jatnna - that manage to punch their way through.

The heart is in the right place for this pleasant little docu about New York City 11-year olds – from trendy downtown Tribeca to uptown Washington Heights and all the schools between – as they enter the ten-year program established by the American Ballroom Theater’s Dancing Classrooms. The dance instructors and the kids’ teachers are dedicated to introducing their wards to the grace and poise of dance and change them from boys and girls into “ladies and gentlemen.” The program teaches the children five types of ballroom dance: merengue, tango, rumba, foxtrot and swing. While all the kids learn all of the dances, five couples are selected to each learn one of the five dances for the competition. One other couple, the alternate, must learn all five of the dances in case any of the five must drop out because of illness. All the schools can choose to compete in the finals, but only nine are selected. The film follows the kids in PS 150 (Tribeca), PS 115 (Washington Heights) and PS 112 (Bensonhurst) as they go through the awkward process of learning how control the movement of their young, awkward bodies. They go through the initially painful process of taking their first dance steps but, as the film progresses, we see that there are some very talented kids involved as they rise to the occasion and prepare to compete with the other schools. Agrelo and Sewell start off in a clear manner as their cameras move from one school to the next, introducing us to some of the kids and showing us their trials and tribulations while learning to ballroom dance. We start to get to know some of the children while they learn their new art but, when the competition starts and many more schools and their kids are brought into the picture, things quickly get diluted and confused. When voice-overs by the children from the subject schools are used to tell about how dance has changed them, the camera roves among the competitors so there is no sense of which child we are hearing. This confusion, coupled with the obtrusive way the cameras interact with the kids on the dance floor, makes “Mad Hot Ballroom” lose its focus and direction in the second half. The subject matter of “MHB” is a specialized one that is going to have a difficult time finding its niche. Spellbound,” about the national spelling bee competition, had a broad demographic of interest that gave it a more general appeal. This dance documentary will have a harder time due to its limited appeal. Ballroom dancers, parents and, maybe, kids in this situation, will like “Mad Hot Ballroom” but I don’t see it going beyond that demo. At 105 minutes running time, “Mad Hot Ballroom” would have benefited from much tighter editing and subject focus. It’s the kind of film that used to be relegated to an after school special, but I don’t even know if that outlet exists anymore in our high-tech world.