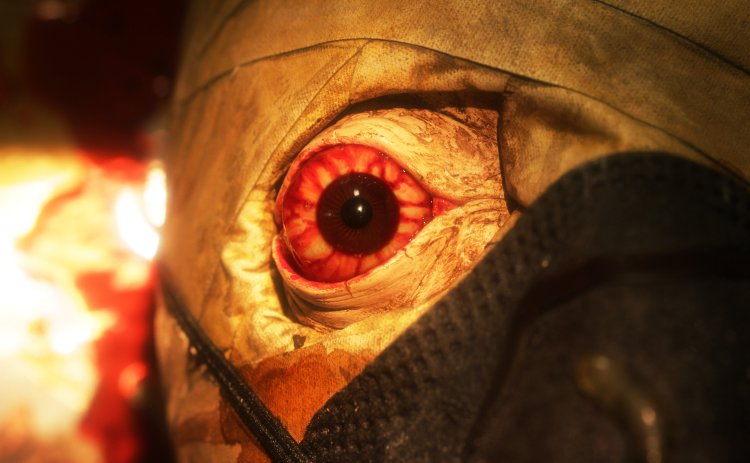 After a long passage from Leviticus painting God at his most vengeful unfurls on yellowed parchment, we see The Assassin, a figure wearing a WWI style steel helmet, goggles and oxygen mask, take a map and step into a diving bell to be lowered into what can only be described as a continual pit of hell, something as imagined by Hieronymus Bosch by way of “Hostel” in “Mad God.”

Writer/director Phil Tippett, the stop motion and creature effects whiz of "Star Wars," "Jurassic Park" and "Robocop," began realizing his nightmares in stop motion puppetry thirty years ago, but abandoned his project when CGI came into prominence.  The project was resuscitated when Tippett Studio employees found the old figures and, eager to learn Tippett’s original craft, encouraged him to complete his visionary work.  The 83 minute feature is a mind blowing visual experience, albeit not one for the faint hearted or those looking for a linear narrative.  Tippett hasn’t created a story so much as envisioned everything from the Big Bang to earth’s apocalyptic destruction and a never ending, torturous existence.

The film is almost entirely done in stop-motion, all of its environments lovingly hand crafted.  There are a few live action sequences, “Repo Man” director Alex Cox featured as an evil puppet master with ridiculously long fingernails, a masked nurse with Goth eye make-up rushing a newborn mutant to a ‘maternal’ Black Death figure.  There are influences and references galore throughout, from H.R. Giger’s designs for the “Alien” world to imagery from Kubrick’s “2001.”  There are creepy broken dolls and panicked eyeballs, the latter observing its own fatal surgery before a medical device takes us right into its head.  Slim humanoid figures pop off an assembly line to be immediately burnt or crushed or perish during slave labor.  A dwarf-like creature afflicted with elephantiasis controls two large beasts with electrical jolts delivered to the bolts affixing metal mesh masks to their faces before feeding maggots to colorfully weird creatures encased in their own huge terrarium.  And there are clocks, wind-up clocks, spring mechanism clocks, ticking grandfather clocks and a bomb’s timer clock, their sound woven into a score which sounds as if it’s reverberating from the interior of a piano.  A most bizarre looking cuckoo jumps out of one, announcing Tippett’s final crescendo of creation and destruction.

“Mad God” is an explosion of dark imagery occasionally goosed with a sick joke.  The film won’t be for everyone, but it is assured entry into the cult canon standing alongside such films as E. Elias Merhige’s “Begotten” and Aleksey German’s “Hard To Be a God.”