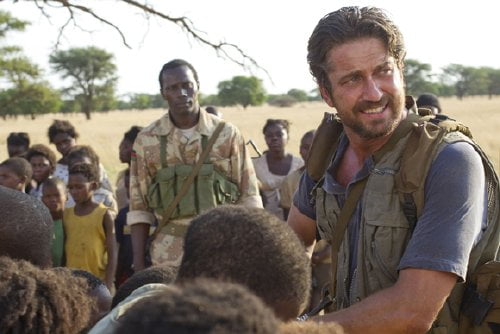 Tough guy biker Sam Childers (Gerard Butler) had a huge chip on his shoulder and was in and out of trouble with the law most of his life. After his latest stint in jail, he returns home to find that his ex-stripper wife, Lynn (Michelle Monaghan), has found Jesus. He resists her urging that he join her at church but, when he hits rock bottom, he, too, finds God and dedicates his life to helping the children brutally conscripted to be bloodthirsty soldiers and save them from the civil strife engulfing Sudan as the “Machine Gun Preacher.”

While biker druggie Sam Childers (Gerard Butler) served time, his wife Lynn (Michelle Monaghan, "Source Code") found God and left the stripper pole for the local canning plant. At first, Sam's irate, but after almost killing a man he asks for her help and finds himself so drawn to salvation he builds his own church. He doesn't stop there, becoming obsessed with the fate of children in war torn Sudan, where he soon devotes all his energies as the "Machine Gun Preacher." Director Marc Forster ("Monster's Ball," "Quantum of Solace") has had an odd career, promising with super low budget indie "Everything Put Together," building steam with "Monster's Ball," then, with the exception of "Stay," settling in with a series of increasingly bland Hollywood productions. "Machine Gun Preacher" is his oddest yet, a shapeless mess of a film that has a passion for its central true life subject but plays like a more liberal version of Stallone's "Rambo" reboot. Gerard Butler is better suited to this kind of material than the romantic comedies he's been misplaced in, but the filmmaking is uneven and we don't really get a true sense of who Sam is. He's real bad, then begs for help and becomes real good. Then after being beaten down by the reality of the human capacity for cruelty and the economy, he becomes something in between. The screenplay by Jason Keller attempts too much, with tornados and proms and troubled best friends (Michael Shannon's Donnie) all vying to draw attention away from the horrors of Sudan. Things are so overstuffed that Kathy Baker barely gets a word in as Sam's mom. Once Sam suddenly gives himself to God, he gets a job rebuilding after the tornado's destruction that suddenly finds him a home owner and owner of his own construction business. When the Church organizes a trip to East Africa to help rebuild war torn areas, Sam's right on board. His curiosity leads him to engage a freedom fighter, Deng (Souleymane Sy Savane, "Goodbye Solo"), in conversation, which in turn, leads to a visit to the reality Deng's countrymen are facing. Sam is horrified when he sees a young boy who's already lost everything lose his life to a land mine. When his first attempt to build an orphanage on dangerous land is thwarted by the LRA (Lord's Resistance Army), Sam almost gives up, but Lynn convinces him to rebuild. She seems to regret that choice later when Sam is willing to plunge his own family into debt to save African children. Forster communicates the suffering in Sudan well, using a young boy saved by Sam after having been forced to be an LRA soldier as a symbol. Much like the doctor in Susanne Bier's "In a Better World," Sam has to face his own propensity for violence as a solution when faced with the same kind of evil. But Forster and Keller leave Sam Childers an enigma, adrift in a foreign land, his family in Pennsylvania their connectedness unresolved. "Machine Gun Preacher" is a noble attempt to enlighten Western audiences about horrors hard to imagine, but the result is unwieldy and Sam Childers himself too broadly drawn. For a film with such a galvanizing subject, it's oddly flat.

Another film “based on true events” comes to us in an overblown, disjointed story by Jason Keller that, even a 2+ hours, feels rushed and almost perfunctory in telling about the life of a man who once was a junkie, killer and crook and became a man of God and savior to hundreds of Sudanese orphans. The acting never achieves convincing levels with Gerard Butler giving Sam Childers little more than action figure status. The rest of the cast are shallowly drawn and never achieve dimension with only one or two exceptions. The likes of Michelle Monaghan and Michael Shannon (as Sam’s junkie friend he tries to save) are wasted in their one note characters. Souleymane Sy Savane, as Sam’s Sudanese friend and fighter against the dreaded LRA, is given any shrift as brave and trusted Deng. This is an incredible story of obsession and dedication that could have been inspirational. But, in the hands of director Marc Forster it is a clunky work that is interesting only some of the time, and that is the time Childers spends in Sudan. The film does not pull any punches showing the terror of a civil war that has children – boys no older than nine or 10 - forced to murder by the so-called “liberation leaders.” The suffering endured by the Sudanese women and children is frankly and graphically shown and does evoke our empathy for their plight. No such feelings, though, are evoked by Butler’s performance. Having another actor or director, or both, may have made this a better film. As such, “Machine Gun Preacher” is a creaky tome that never finds its level.